Who are the Longest Serving Active CEOs in the S&P 500?
Advertisement

This Infographic Breaks Down Careers In Finance, From Hedge Funds to M&A

What The Data Says About Wealth Inequality

Visualizing Net Worth by Age in America 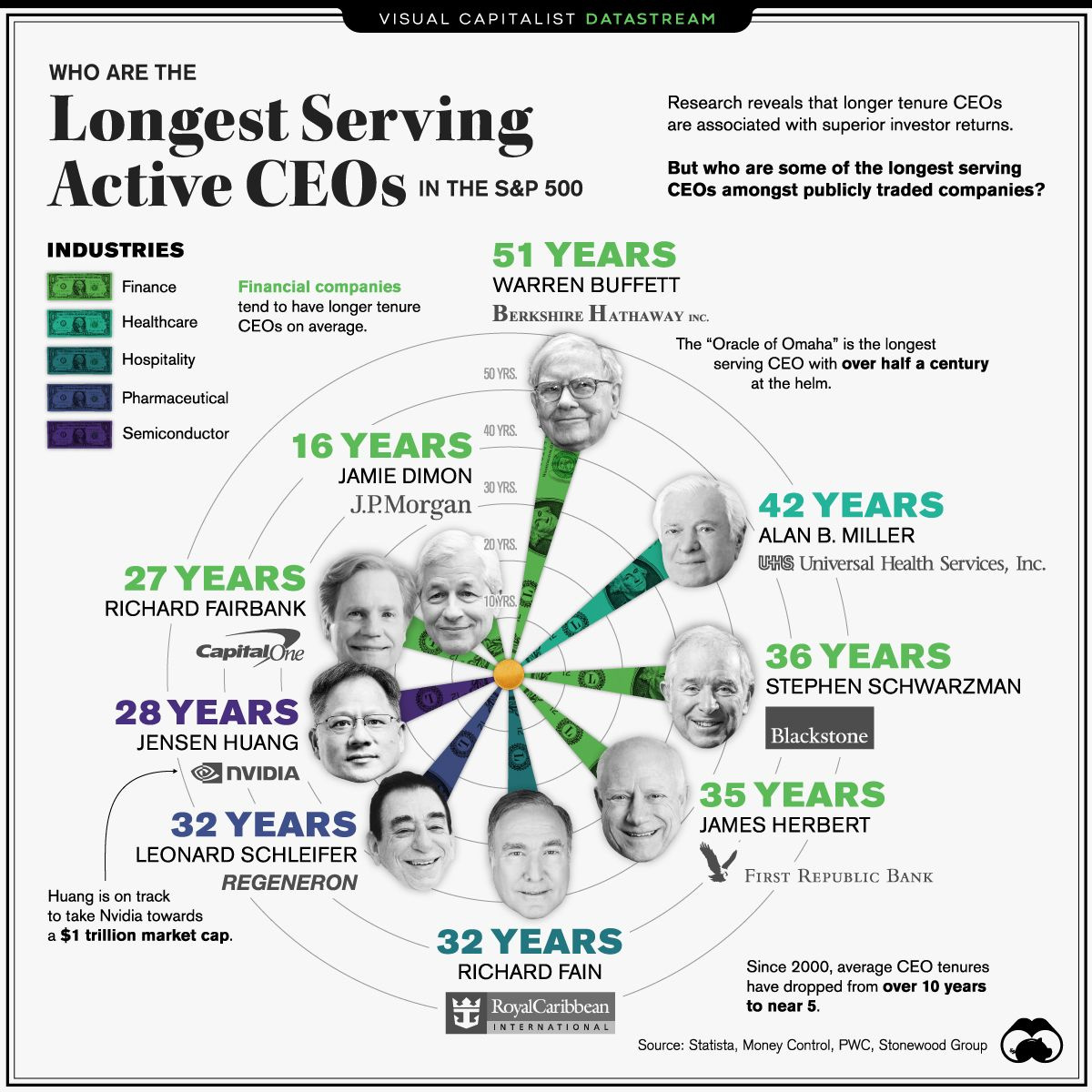 Who are the Longest Serving Active CEOs in the S&P 500?

Have you ever wondered which chief executive officer has remained at their position the longest? As an investor, you might be interested to know that studies have linked CEO duration with superior stock returns.

One study in particular from the University of Sydney looked at some 19,000 CEOs across the NYSE and NASDAQ from 1992-2016 and concluded:

The data in this piece highlights several of the most tenured CEOs in the S&P 500. Warren Buffett is the longest serving leader of the bunch, having maintained his position for over half a century.

Depending on your investment style, who the CEO is can be an important consideration. Fundamental-oriented investors frequently size up a management team as a key step in evaluating the future prospects of a company.

A few of the longest serving CEOs are some of the top rated in the world as well. This table below shows where Warren Buffett, Jamie Dimon, and Jensen Huang appear and rank, in various business magazines and reports:

Jensen Huang, in particular, has gained a ton of popularity due to Nvidia’s impressive growth and performance. Their $816 billion market cap means Huang oversees the largest company of this group. In fact, a 23% further increase in their share price would launch Nvidia into the elite trillion dollar club, a fairly small gain when contrasted to their 1,250% share price increase during the last five years.

The data on CEO performance is often contingent on how long they last in the role. An HBR report took a look at the performance of 747 S&P 500 CEOs and has some surprising insights. For example, the best performance period for CEOs tends to come in the 2nd decade in years 11-15, otherwise known as “The Golden Years” stage.

Unfortunately, a lot of CEOs don’t make it long enough to enjoy their golden years. PWC found that CEO turnover has become increasingly more rapid relative to the past. Consider that turnover among CEOs at the world’s 2,500 largest companies soared to a record high of 17.5% just a few years ago. Furthermore, median tenures for CEOs have steadily dipped from a 10-year average in 2000, to 8 years in 2016, and closer to 5 in more recent times.

If recent trends and patterns are any indication, long-term serving CEOs like those highlighted above will become even more rare.

The post Who are the Longest Serving Active CEOs in the S&P 500? appeared first on Visual Capitalist.

How to Create a Custom 404 Error Page in WordPress

7 Unexpected Lessons That Changed The Way I Write via @sejournal, @Juxtacognition