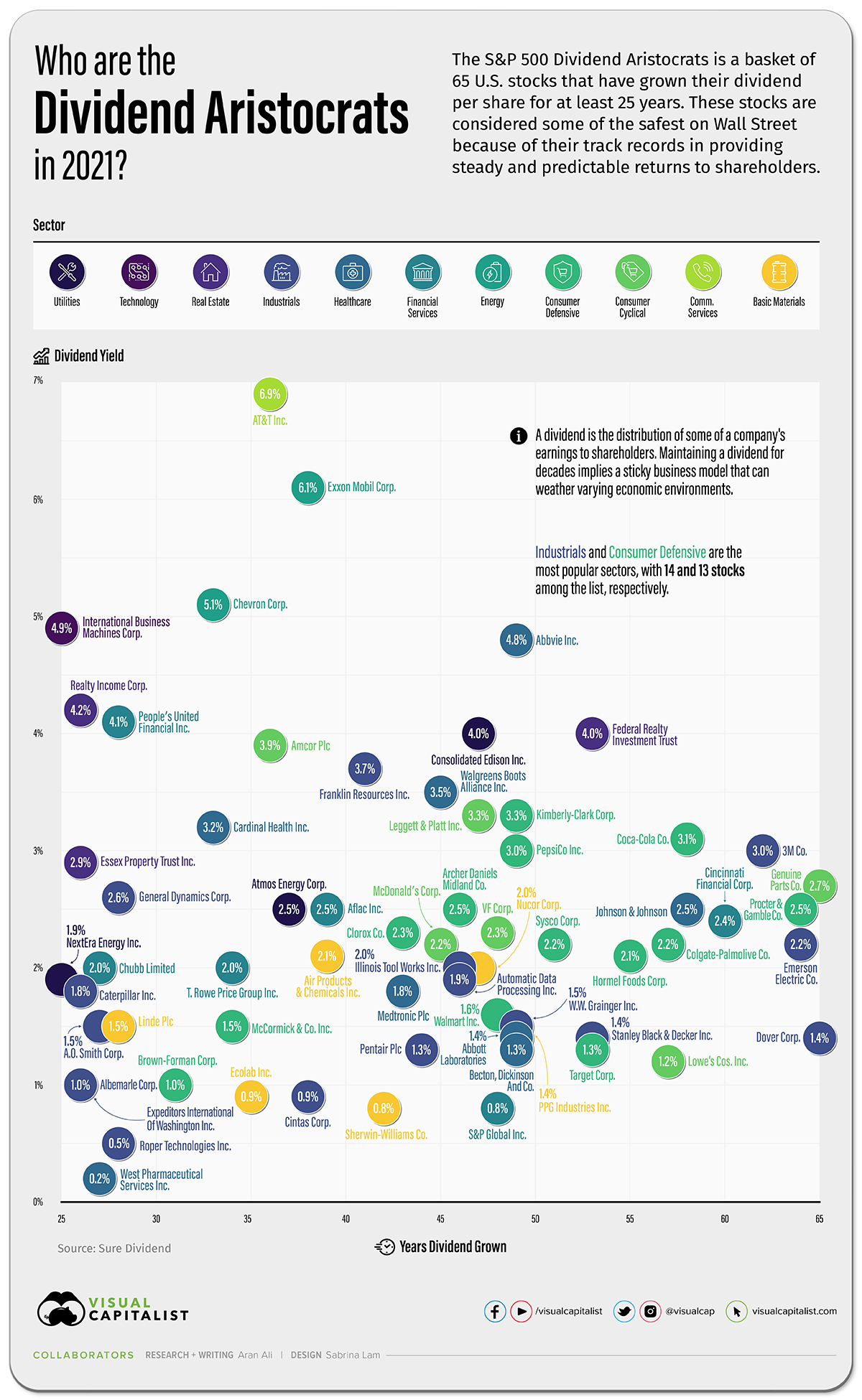 The Dividend Aristocrats in 2021

Legendary investor George Soros once said, “Good investing should be boring”. But an increase in volatile themes today suggests this maxim has gone ignored by at least some market participants.

From a high level, we can view investments on a spectrum. Volatile assets like cryptocurrencies and SPACs are more on the exciting side of things. The boring side is likely where Dividend Aristocrat stocks lie.

The data above, from Sure Dividend, looks at all 65 Dividend Aristocrats, ranking them by their yield, sector, and years of growth.

What are Dividend Aristocrats?

The U.S. Dividend Aristocrats are a basket of 65 stocks in the S&P 500 index. These companies have been growing their dividend per share consecutively, for a minimum of 25 years.

This is easier said than done, since companies often distribute dividends quarterly. To pay and grow a dividend in the long run implies a business model that can withstand varying economic environments, including setbacks like market crashes.

Though dividend stocks may not carry the same excitement as other investments, studies show that dividends represent over 50% of total S&P 500 market returns.

Numerous companies on this list have brand value that stretches all over the globe—including the likes of McDonald’s, Coca-Cola, and Walmart.

Vast global recognition and branding power is in part why these companies can generate cash flows to pay dividends for decades on end. For instance, 94% of the world population recognizes Coca-Cola’s logo. 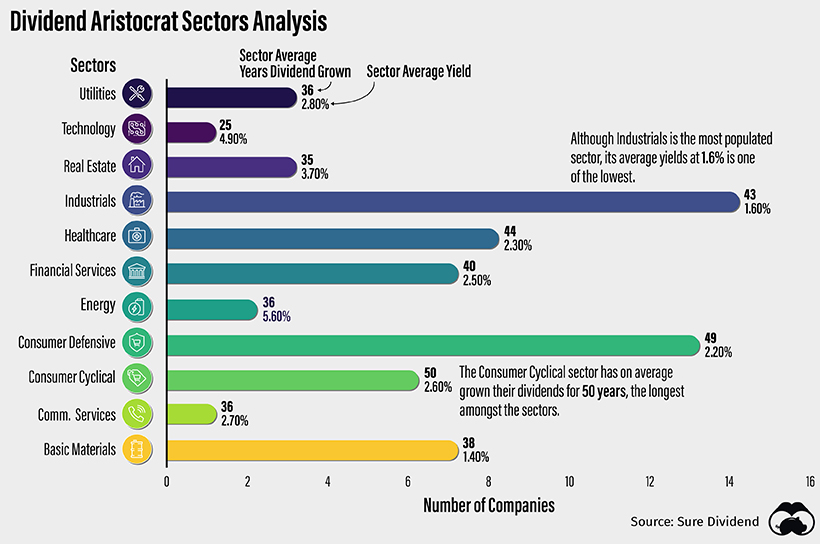 The 65 Dividend Aristocrat stocks break down into 11 sectors. Across sectors, Industrials is the most crowded, consisting of 14 companies, with an average yield of 1.6% and a dividend growth duration of 43 years. Popular stocks in this sector include 3M and Caterpillar.

Next is the Consumer Defensive sector, containing 13 companies like Clorox, Target, Pepsi, and Procter & Gamble. The average yield is 2.2%, with an average growing duration of 49 years.

The highest yield by sector belongs to Energy, at 5.5%, but is only made up of only Chevron and Exxon Mobil. Their dividend track record may falter in the years to come, due to transitions away from the oil business. Just last year, Big Oil firms reported record net income losses, and Exxon was booted from the Dow Jones Industrial Average (DJIA).

The Consumer Cyclical sector has been increasing their dividend for an average of 50 years, the longest of any sector. Lowe’s and McDonald’s are involved in this category.

Businesses for Today and Tomorrow

Although the Dividend Aristocrats list is published every year, the companies on the list are a stable bunch, meaning changes are fairly infrequent.

In a market climate in part shaped by low rates and compressed yields in the fixed income space, Dividend Aristocrats might be a particularly attractive alternative for investors with a longer-term outlook.

The post Who are the Dividend Aristocrats in 2021? appeared first on Visual Capitalist.

Comparing the Carbon Footprint of Gold and Bitcoin