Which U.S. Generation Wields the Most Economic Power?
Advertisement

A Regional Breakdown of Millennials Around the World

Which U.S. Generation Wields the Most Cultural Power?

Ranking U.S. Generations on Their Power and Influence Over Society


In the modern digital world, social media reach is power.

The people with the most followers on Twitter, for example, have a massive platform to spread their messages, while those with large, engaged followings on Instagram are an advertiser’s dream sponsor partner.

Social media can also be an equalizer of power. It’s true that many celebrities boast large followings across platforms, but social media has also enabled previously unknown personalities to turn YouTube or TikTok fame into veritable star power and influence.

Who has the biggest reach across the entire social media universe? Instead of looking at who has the most followers on Instagram, Twitter, or other networks, we ranked the most-followed personalities across all major platforms combined.

Who Has the Most Overall Followers on Social Media?

We parsed through hundreds of the most-followed accounts on multiple platforms to narrow down the top influencers across social media as of April 2021.

The results? A top 50 list of social media influencers consisting of athletes, musicians, politicians, and other personalities.

But there are other illuminating highlights, such as the global reach of music. With large and diverse fanbases, artists account for half of the top 50 largest social media followings.

Also notable is the power of Instagram, which was the biggest platform for 67% of the top 50 social media influencers. This includes hard-to-categorize celebrities like the Kardashians and Jenners, which turned reality TV and social media fame into business and media empires. 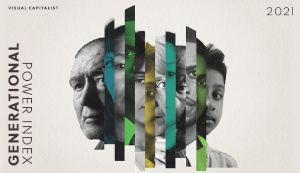 However, it’s not only celebrities that dominate social media.

Politicians were also prominent influencers. Former U.S. President Barack Obama has the most followers on Twitter, and India’s Prime Minister Narendra Modi has more than 175 million followers across social media.

Former U.S. President Donald Trump would have also made the list with more than 140 million followers across social media before being banned from multiple platforms on January 8, 2021.

The average age of the top 50 influencers was just over 37.

In our Generational Power Index (GPI), which measures the share of power generations hold in various categories, digital platforms were a key area where Millennials derived their power and influence. Overall, Baby Boomers—and to a lesser extent, Gen X—still run the show in most areas of society today.

As most fans and advertisers know, not all social media accounts and followings are homogenous.

Many influencers with relatively small followings have more consistent engagement, and are often able to demand high advertising fees as a result.

Conversely, most social media platforms are reckoning with a severe glut of fake accounts or bots that inflate follower counts, impacting everything from celebrities and politicians to personalities and businesses.

Regardless, social media has become a mainstay platform (or soapbox) for today’s cultural influencers. Billions of people turn to social media for news, engagement, recommendations, and entertainment, and new platforms are always on the rise.

Editor’s Note: An earlier version of the data used for this story incorrectly counted Facebook likes instead of followers for some personalities. The content has since been corrected and updated.”