Visualizing the Impact of Rising Sea Levels, by Country

Mapped: 30 Years of Deforestation and Forest Growth, by Country

Mapped: Economic Freedom Around the World

Mapped: The 25 Poorest Countries in the World 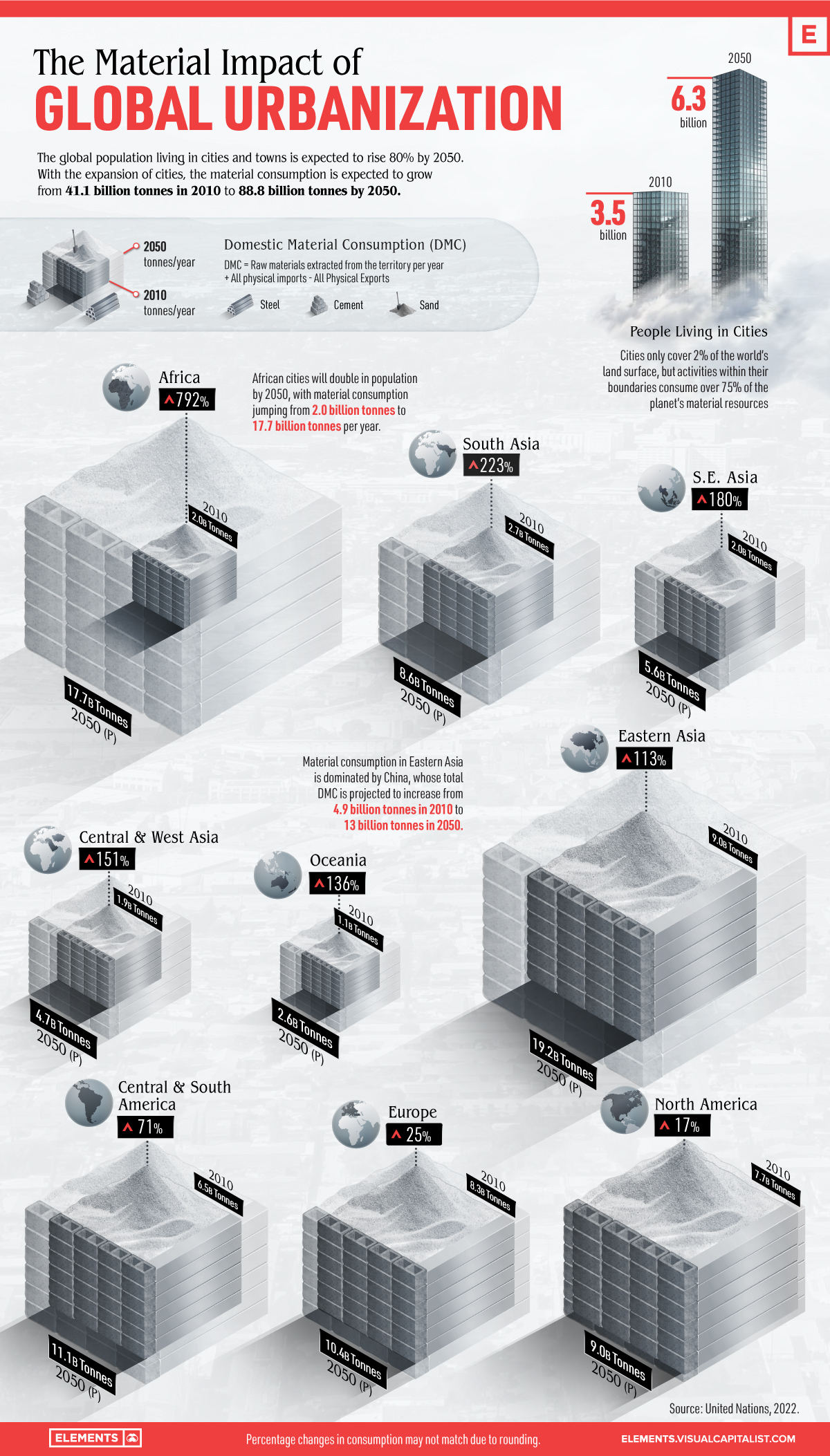 This was originally posted on Elements. Sign up to the free mailing list to get beautiful visualizations on natural resource megatrends in your email every week.

Cities only cover 2% of the world’s land surface, but activities within their boundaries consume over 75% of the planet’s material resources.

With the expansion of urban areas, the world’s material consumption is expected to grow from 41.1 billion tonnes in 2010 to about 89 billion tonnes by 2050.

In today’s graphic, we use data from the UN International Resource Panel to visualize the material impact of global urbanization.

How Material Consumption is Calculated

Every year, the world produces an immense amount of materials in order to supply the continuous construction of human-built environments.

To calculate how much we use to build our cities, the UN uses the Domestic Material Consumption (DMC), a measure of all raw materials extracted from the domestic territory per year, plus all physical imports, minus all physical exports.

Generally, the material consumption is highly uneven across the different world regions. In terms of material footprint, the world’s wealthiest countries consume 10 times as much as the poorest and twice the global average.

Based on the total urban DMC, Eastern Asia leads the world in material consumption, with China consuming more than half of the world’s aluminum and concrete.

According to the UN, the bulk of urban growth will happen in the cities of the Global South, particularly in China, India, and Nigeria.

Consumption in Asia is set to increase as the continent hosts the majority of the world’s megacities—cities housing more than 10 million people.

However, the biggest jump in the next decades will happen in Africa. The continent is expected to double in population by 2050, with material consumption jumping from 2 billion tonnes to 17.7 billion tonnes per year.

Global urban DMC is already at a rate of 8–17 tonnes per capita per year.

With the world population expected to swell by almost two and a half billion people by 2050, new and existing cities must accommodate many of them.

This could exacerbate existing problems like pollution and carbon emissions, but it could equally be an opportunity to develop the low-carbon and resource-efficient cities of the future.

How to Remove MailOptin Plugin Data on Your WordPress Site