View the full-resolution version of this infographic 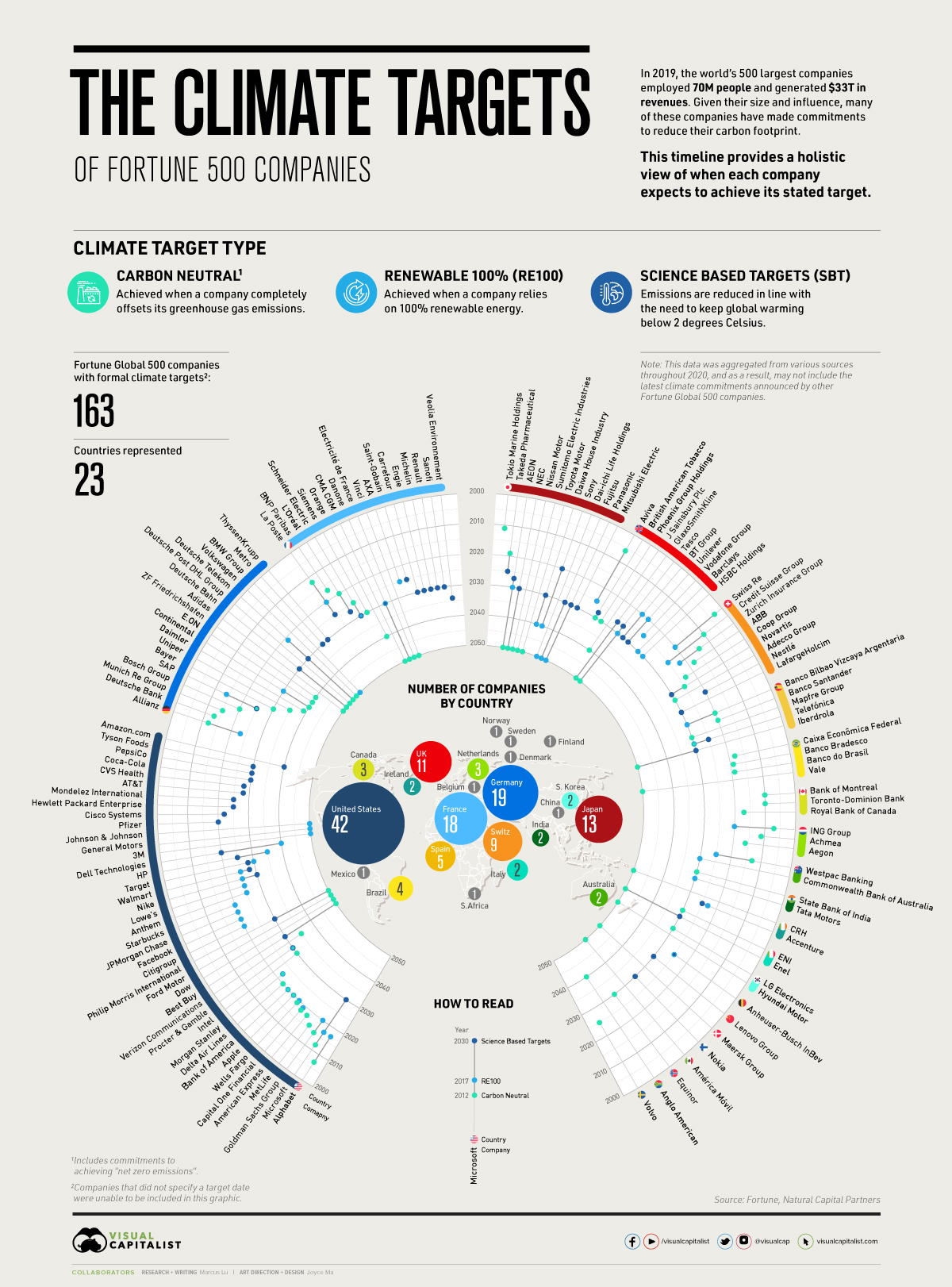 View the high-resolution version of this infographic by clicking here
The Fortune Global 500 is a ranking of the world’s 500 largest companies by revenue. In 2019, this influential group employed 70 million people and generated revenues of over $33 trillion.

Given their size and influence, many of these companies are taking climate action quite seriously. For example, 30% of the group have either achieved a climate goal or are publicly committed to doing so by 2030—a significant increase from just 6% in 2016.

In this infographic, we’ve used data from Natural Capital Partners to provide a holistic view of when Fortune Global 500 companies plan to meet their stated climate goals.

When taking climate action, businesses have a variety of targets they can pursue. Three of the most common ones include carbon neutrality, RE100, and science based targets (SBT).

After choosing a target, businesses can also set a date for when they intend to achieve it. As the above graphic shows, many companies are targeting 2030, a year that is frequently touted as a deadline for meeting the goals of the Paris Agreement.

A fourth target known as “net zero emissions” is also used, though its exact definition tends to vary. For the purposes of this infographic, we’ve considered a commitment to net zero emissions to be the same as achieving carbon neutrality.

The following table summarizes the climate actions of Fortune Global 500 companies. Firms that made commitments without a target date have been noted in the table with a “C”.

Note: This data was aggregated from various sources throughout 2020, and as a result, may not include the latest climate commitments announced by companies within the Fortune Global 500.

As of October 2020, 163 companies from the Fortune Global 500 have publicly committed to achieving at least one of these climate targets. That represents 32.6% of the total group.

The most common target is carbon neutrality, which has 91 companies on board. In second place is science based targets (SBT), which has 74 companies committed—of those, 16 have not declared a target date. RE100 was the least common, with 56 companies committed. Because some companies are committed to multiple targets, these figures add to more than 163.

Climate Action is on the Rise

Private-sector awareness around climate change and other sustainability issues has gained strong momentum in recent years.

Since 2011, the number of S&P 500 companies publishing sustainability reports increased from 20% in 2011, to 90% in 2019. This was likely due to investor demand and a broader acceptance of environmental, social, and governance (ESG) criteria.

Governments around the world are also taking a more proactive approach to climate action. The Biden administration, for example, seeks to make a $2 trillion investment to help a variety of U.S. industries become more sustainable.

“We have the opportunity to build a more resilient, sustainable economy – one that will put the United States on an irreversible path to achieve net-zero emissions…by no later than 2050.”
– Biden-Harris campaign

America’s goal of reaching net-zero emissions by 2050 is shared with a handful of other advanced economies, including Japan and the EU. The UK has taken these pledges one step further, becoming the first G7 country to pass a law that requires itself to bring emissions to net zero by 2050.