Visualizing the Social Risk of the World’s Top Investment Hubs

As social responsibility becomes an important aspect of doing business, it’s more crucial than ever for decision-makers to understand the risks associated with various global markets.

This graphic, using data from a report by Verisk Maplecroft, looks at the world’s top cities for foreign direct investment (FDI) and assesses their relative levels of social risk.

In the article below, we’ll take a look at the research methodology to explain how risk was assessed in the report and touch on some key markets that placed high on the ranking.

The Relationship Between FDI and Social Risk

To look at the relationship between FDI and social risk, the report identified the top 100 cities for FDI in 2020, using data from fDi Markets (the Financial Times’ foreign investment monitor).

After calculating scores based on these three metrics, cities were then grouped into four categories to measure their level of social risk:

Based on this analysis, citizens in 33 of the top 100 cities for FDI (representing $71 billion of inward investment) are at ‘high’ or ‘extreme’ levels of social risk, meaning they face significant threats to their civil, political, and labor rights.

Of the top 100 places, Istanbul and Izmir rank the highest when it comes to overall human rights risks, largely because of labor rights violations and the exploitation of migrant and refugee workers. This is something manufacturers should take note of, especially those who outsource production to these Turkish cities.

In contrast, Beijing, which places third on the list, scores high due to China’s various civil rights issues. Other major manufacturing and commercial hubs in China, like Guangzhou and Shanghai, place high on the list as well.

While a third of the top FDI cities are at high or extreme social risk, this figure is even higher when looking at all 575 cities included in the [email protected] Social Index. 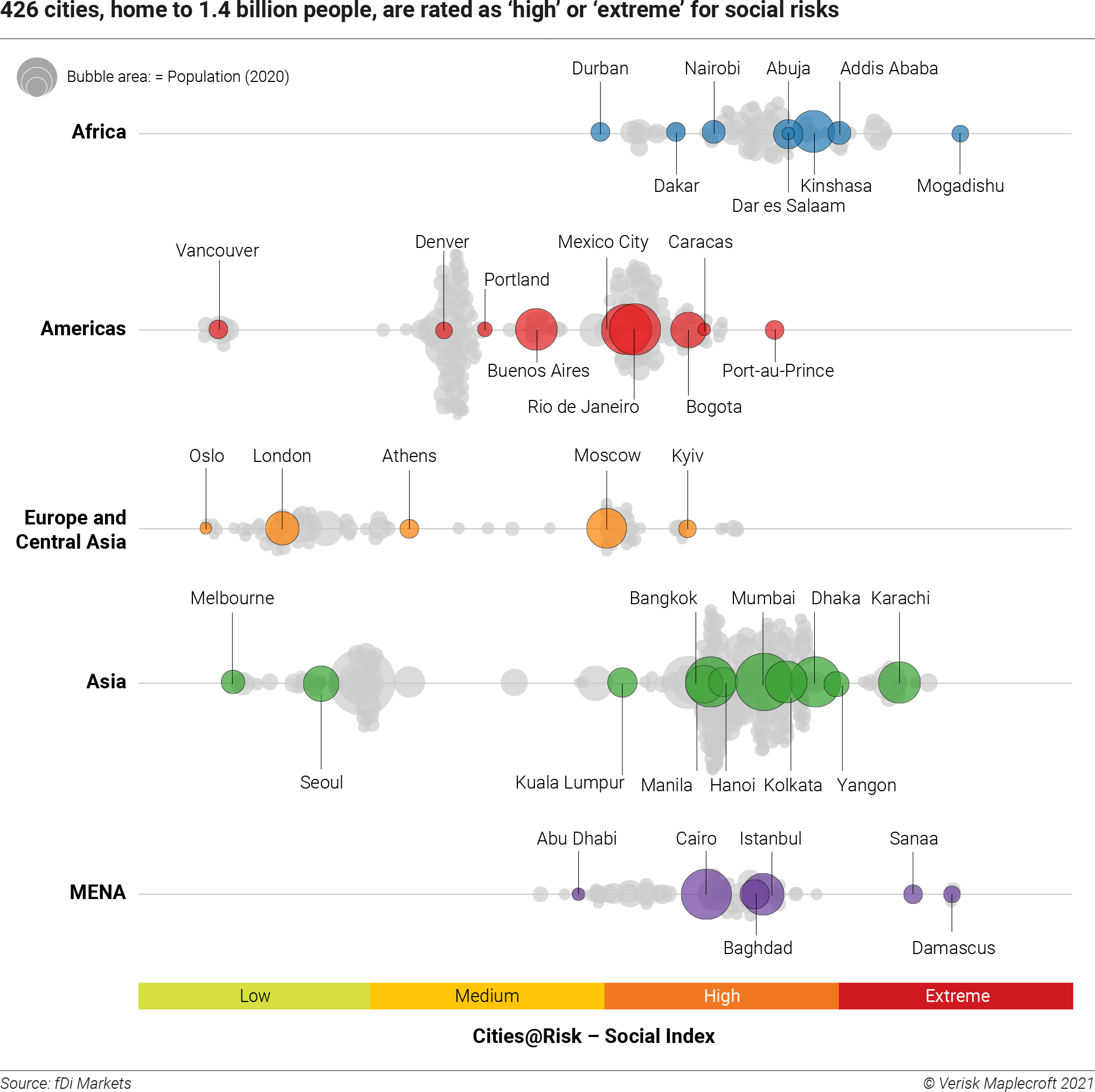 Of the 575 cities, 75% are classified as ‘high’ or ‘extreme’ risk. Mogadishu, Somalia is the highest risk city, followed by Damascus, Aleppo, and Homs in Syria, Pyongyang in North Korea, and Sanaa in Yemen.

In addition to the overall ranking, the report provides insight into specific human rights violations, highlighting which cities are most at risk. 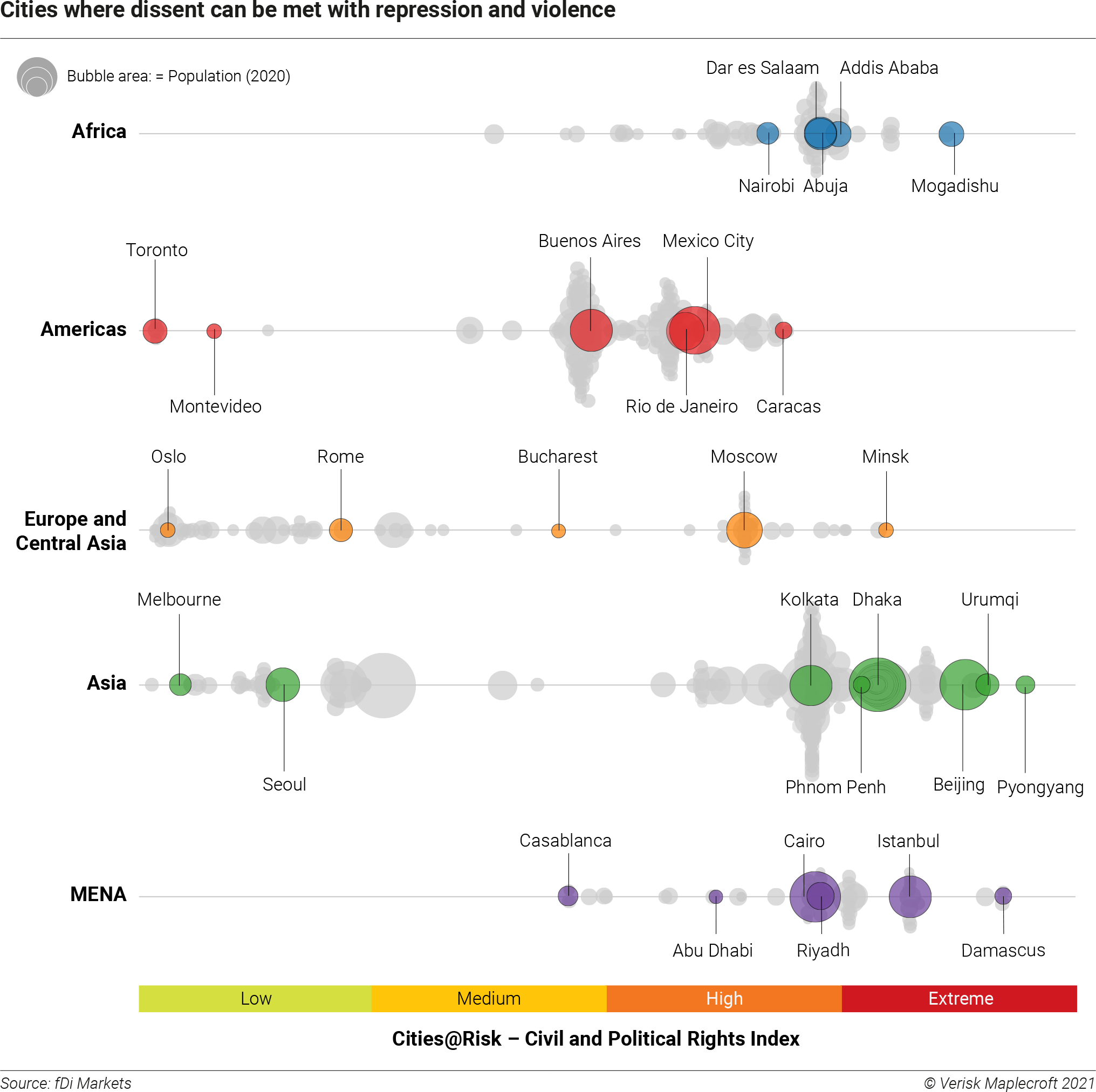 Perhaps unsurprisingly, Pyongyang, North Korea places first on the list when it comes to civil and political rights violations. Under the current North Korean regime, some significant civil rights violations include arbitrary arrests and detentions, the holding of political prisoners and detainees, and a lack of judicial independence.

In addition to North Korea, Syria places high on the civil rights risk index as well, with three of the top five cities located in the war-torn country.

When focusing specifically on labor rights, almost half of the ‘high’ or ‘extreme’ risk cities are in Europe and Central Asia. 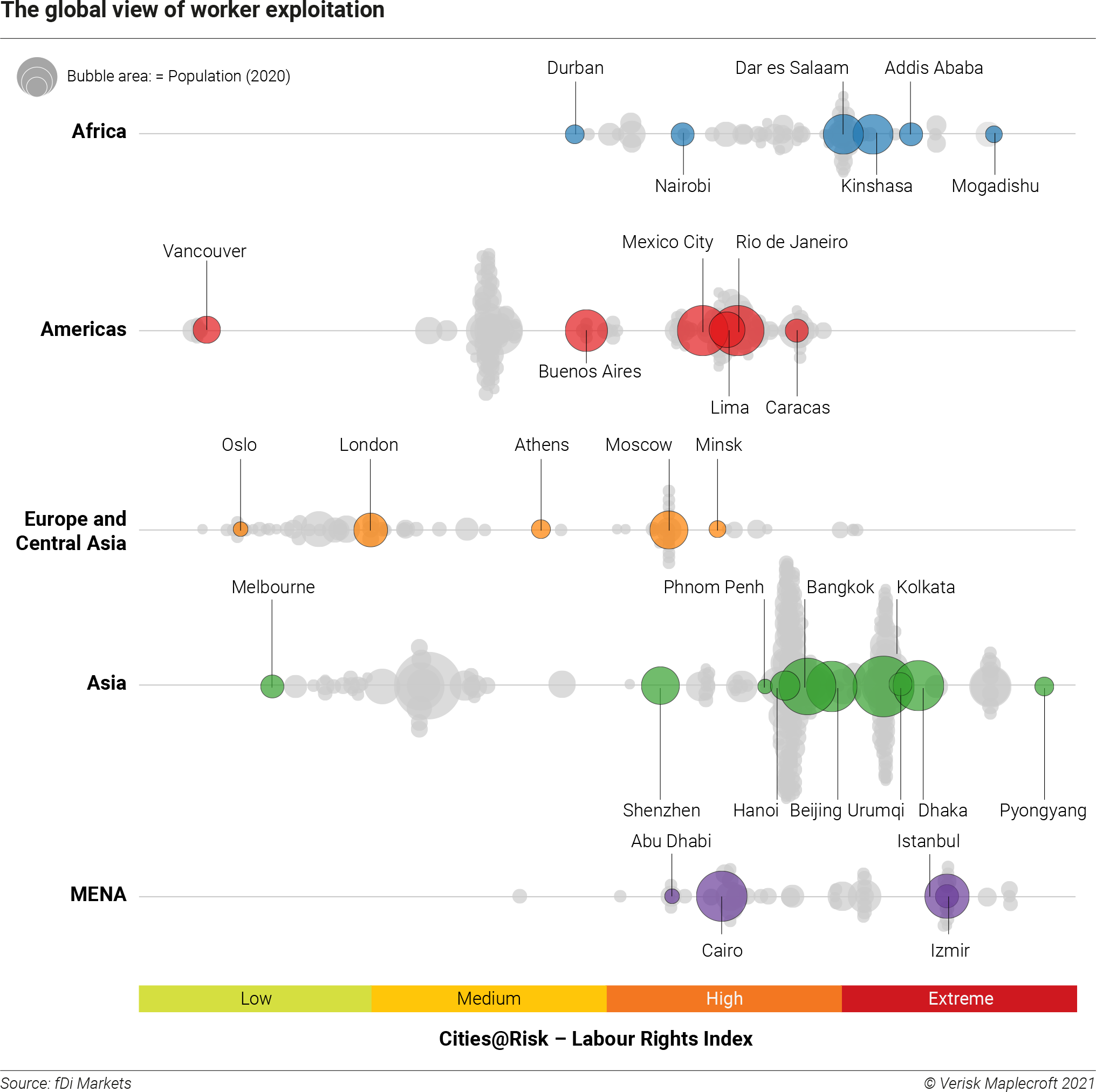 The biggest problems across a majority of ‘high’ risk cities include child labor, the exploitation of migrant workers, and modern slavery. Pakistan in particular struggles with child labor issues, with an estimated 3.3 million children in situations of forced labor.

What This Means for Foreign Investors

Understanding a country’s social landscape can help organizations make decisions on where to conduct business, especially those that prioritize ESG efforts.

And, while organizations who invest in ‘high’ risk locations aren’t directly involved in any human rights violations, being associated with a ‘high’ risk city could impact a corporation’s reputation, or cause financial damage down the line.

5 Trends Shaping the Future of eCommerce