Ranked: The Richest Veterans in America

The Richest People in the World in 2021

Mapped: The Wealthiest Billionaire in Each U.S. State

Elon Musk is the World’s Richest Person in 2021 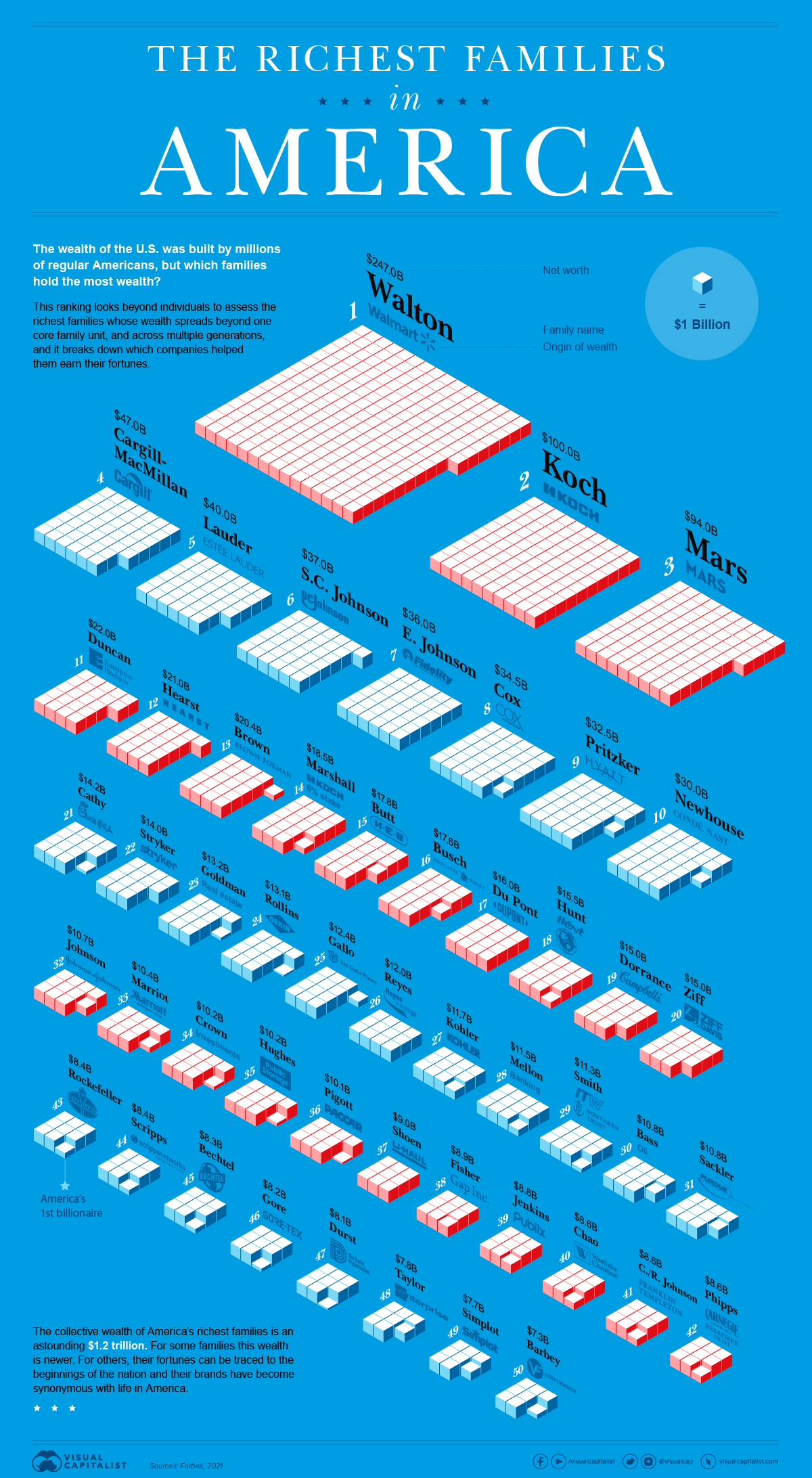 Visualizing the Richest Families in America

When we think about the richest people in America, individual names often come to mind like Elon Musk, Jeff Bezos, and Bill Gates. But often, it’s the the richest families in America that hold a deeper legacy, and sometimes, even deeper pockets.

The country’s 50 richest families hold a collective wealth of $1.2 trillion. This ranking goes beyond nuclear family units and self-made fortunes, and it instead measures the wealth of multi-generational or extended families.

Our visualization, which leverages the latest data from Forbes, reveals the wealthiest families in America and the enterprises that helped them earn their billions.

Editor’s note on methodology: in this ranking, Forbes leaves out self-made entrepreneurs that appear with their nuclear families on the billionaires list. For example, Jeff Bezos founded Amazon and Rupert Murdoch founded News Corp, but these successes did not come from family wealth that was passed down to them.

Say the name Rockefeller or Vanderbilt, and everyone knows who you’re talking about—but how do these household names hold up in the modern rankings?

Below are the 50 richest families in America, based on net worth:

Interestingly, the Vanderbilts—the railroad tycoons that were once the richest family in the country in the late 19th century—have been ousted from the rankings entirely. Other notable American families, like Ford and Astor, have lost their place on the list as well.

On the other hand, the Rockefellers still hold their status today, ranked at number 43 with a net worth of $8.4 billion. John D. Rockefeller became America’s first billionaire back in 1916, despite the breaking up of Standard Oil for antitrust reasons.

Over the last five years, nearly every family on this list has seen wealth increase. Many of the behemoth companies on which these families built their fortunes are staples in America, like Campbell’s Soup, Cargill, Dixie Cups, Estee Lauder, and M&Ms and Snickers.

For example, the South’s beloved fast food chain, Chick-fil-A, was founded by the Cathy family and generated $12.67 billion in sales as of the latest annual data, making it the third most popular chain restaurant in the country.

Some of the newer families to make the list also owe it to the success of their enterprises:

However, a few families have experienced significant losses since the last Forbes ranking. Here’s a look at some notable net worth decreases:

Purdue Pharma recently filed for bankruptcy. The Sackler family’s plan is to reformulate the company into a new venture whose profits would go towards the opioid crisis, for which they are largely blamed. It would also cost the family around $4.3 billion directly.

Keeping it in the Family

While some families may have experienced decreases in their wealth, for many this is just a small bump in the road.

Overall, the richest families in America are the keepers of immense wealth that has accumulated over generations. For some, their names are now cultural landmarks across the U.S. and their brands have become synonymous with life in America.

The post Visualized: The Richest Families in America appeared first on Visual Capitalist.

Content gaps are keywords your competitors rank for, which you don’t. That sucks, right?!? Find your content gaps on your site, and fill them!…

There is always something else to learn! Take some time today to learn something new!…