Timeline: The Rise, Fall, and Return of the Hummer

The Number of EV Models Will Double by 2024

When asked to describe how the metal zinc is used, people often mention vitamins, sunscreen, or metal coating.

But few are aware of zinc’s applications in transportation, infrastructure, electronics, food security, and renewable energy.

This graphic by Teck shows how zinc is playing a key role in the low carbon economy.

Zinc is one of the most versatile and essential materials known to mankind. It is the fourth most used metal in the world behind iron, aluminum, and copper.

The primary use of zinc is in the galvanizing process, which protects iron and steel from rusting. Zinc coatings play a key role in public transportation and infrastructure by extending the life of steel used in bridge rails and support beams, railway tracks, and public transportation hubs and terminals. 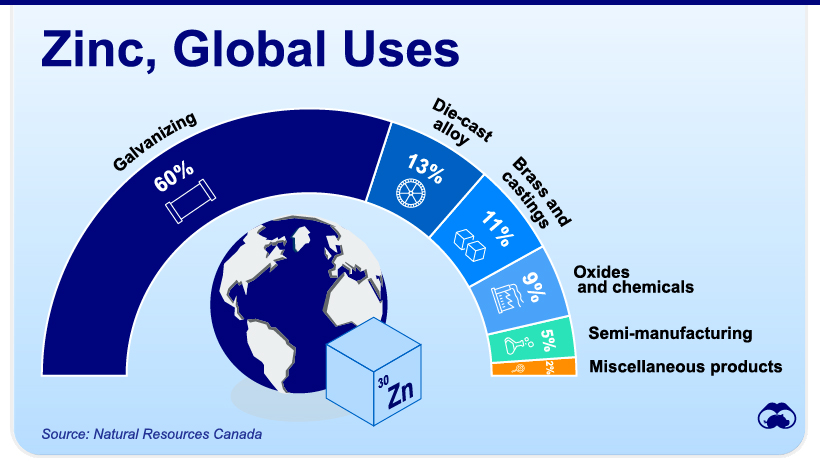 Due to its growing role in energy storage and its superior ability to protect metals against corrosion, zinc remains an essential material for the future.

Zinc in the Energy Transition

Zinc-ion batteries are considered safer than lithium-ion as they use a water-based chemistry, avoiding the fire problem that occurs with Li-ion batteries in electric vehicle (EV) battery packs.

Galvanized steel requires zinc and is the preferred material used by EV manufacturers for car bodies. The average EV requires 0.2 tonnes of steel.

Zinc is 100% recyclable—it can be recovered and reused without a loss in quality. Currently, 30% of all zinc produced worldwide originates from recycled or secondary zinc.

The metal plays a critical role in enabling other green technologies too, like solar and wind. Zinc coatings protect solar panels and wind turbines and prevent rust. A 10MWh offshore wind turbine requires 4 tonnes of zinc, while a 100MWh solar panel park—enough to supply 110,000 homes—requires 240 tonnes of zinc.

Zinc is a $40 billion per year market. Different from other metals, zinc is naturally abundant and resources are available to meet future demand for many generations.

As the world transitions to a low-carbon economy, zinc will continue to play a key role in supporting clean energy technologies.

As one of the world’s largest producers of mined zinc, Teck is committed to responsible mining and delivering the metals necessary for a low-carbon future.