The total U.S. national debt reached an all-time high of $28 trillion* in March 2021, the largest amount ever recorded.

To see how America’s debt has gotten to its current point, we’ve created an interactive timeline using data from the Congressional Budget Office (CBO). It’s crucial to note that the data set uses U.S. national debt held by the public, which excludes intergovernmental holdings.

*Editor’s note: This top level figure includes intragovernmental holdings, or the roughly $6 trillion of debt owed within the government to itself.

It’s worth pointing out that the national debt hasn’t always been this large.

Looking back 150 years, we can see that its size relative to GDP has fluctuated greatly, hitting multiple peaks and troughs. These movements generally correspond with events such as wars and recessions.

To gain further insight into the history of the U.S. national debt, let’s review some key economic events in America’s history.

After its WWI victory, the U.S. enjoyed a period of post-war prosperity commonly referred to as the Roaring Twenties.

This led to the creation of a stock market bubble which would eventually burst in 1929, causing massive damage to the U.S. economy. The country’s GDP was cut in half (partially due to deflation), while the unemployment rate rose to 25%.

WWII quickly brought the U.S. back to full employment, but it was an incredibly expensive endeavor. The total cost of the war is estimated to be over $4 trillion in today’s dollars.

To finance its efforts, the U.S. relied heavily on war bonds, a type of bond that is marketed to citizens during armed conflicts. These bonds were sold in various denominations ranging from $25-$10,000 and had a 2.9% interest rate compounded semiannually.

Over 85 million Americans purchased these bonds, helping the U.S. government to raise $186 billion (not adjusted for inflation). This pushed debt above 100% of GDP for the first time ever, but was also enough to cover 63% of the war’s total cost.

Despite involvement in the Korea and Vietnam wars, debt-to-GDP declined to a low of 23% in 1974—largely because these wars were financed by raising taxes rather than borrowing.

The economy eventually slowed in the early 1980s, prompting President Reagan to slash taxes on corporations and high earning individuals. Income taxes on the top bracket, for example, fell from 70% to 50%.

The Global Financial Crisis served as a precursor for today’s debt landscape.

Interest rates were reduced to near-zero levels to speed up the economic recovery, enabling the government to borrow with relative ease. Rates remained at these suppressed levels from 2008 to 2015, and debt-to-GDP grew from 39% to 73%.

It’s important to note that even before 2008, the U.S. government had been consistently running annual budget deficits. This means that the government spends more than it earns each year through taxes.

The COVID-19 pandemic damaged many areas of the global economy, forcing governments to drastically increase their spending. At the same time, many central banks once again reduced interest rates to zero.

This has resulted in a growing snowball of government debt that shows little signs of shrinking, even though the worst of the pandemic is already behind us.

In the U.S., federal debt has reached or surpassed WWII levels. When excluding intragovernmental holdings, it now sits at 104% of GDP—and including those holdings, it sits at 128% of GDP. But while the debt is expected to grow even further, the cost of servicing this debt has actually decreased in recent years. 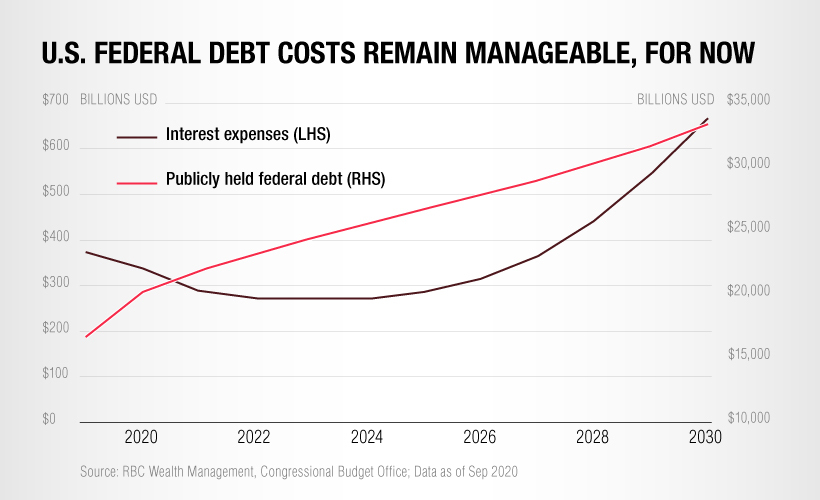 This is because existing government bonds, which were originally issued at higher rates, are now maturing and being refinanced to take advantage of today’s lower borrowing costs.

The key takeaway from this is that the U.S. national debt will remain manageable for the foreseeable future. Longer term, however, interest expenses are expected to grow significantly—especially if interest rates begin to rise again.

Are we in a new era of web design? What do we call it?