All World Languages in One Visualization

Figures of Speech: 40 Ways to Improve your Writing


When it came to choosing a new hobby during COVID-19 lockdowns, learning a new language was a popular choice—in March 2020, the language app Duolingo saw a 300% boost in new users.

To find out which countries wanted to learn which languages, Wordtips used Google’s Keyword Planner, and tallied the number of searches for ‘learn x language’ (translated into different languages) in every country from May 2020 to May 2021.

Most Desired Languages to Learn in North America

Interestingly, Japanese is the most popular language that Americans and Canadians want to learn.

While this may sound surprising, North Americans have consumed and adored Japanese pop culture since the early 1990s. And recently, Westerners’ interest in anime has grown even more prominent, with the demand for anime programs in the U.S., for Q1 of 2021, up 33% compared to a year prior.

Another country’s top pick that may come as a surprise is Belize, where the most popular language to learn is Chinese.

According to the 2000 Census, almost 1% of the country’s population identifies as Chinese. Chinese immigration to Belize began in the mid-1800s, when Chinese immigrants were brought into the country (then known as British Honduras) as laborers.

More recently, a wave of Taiwanese migrants have immigrated and set up businesses in Belize, as part of Taiwan’s international development efforts.

Meanwhile in South America, both Peru and Chile showed a strong desire to learn Korean. The popularity of K-Pop in South America demonstrates how media and art can help spread languages far beyond their original borders, and sometimes in unexpected places.

Most Desired Languages to Learn in Europe

English is the most popular language across Europe, as it’s the top searched language in 34 European countries. 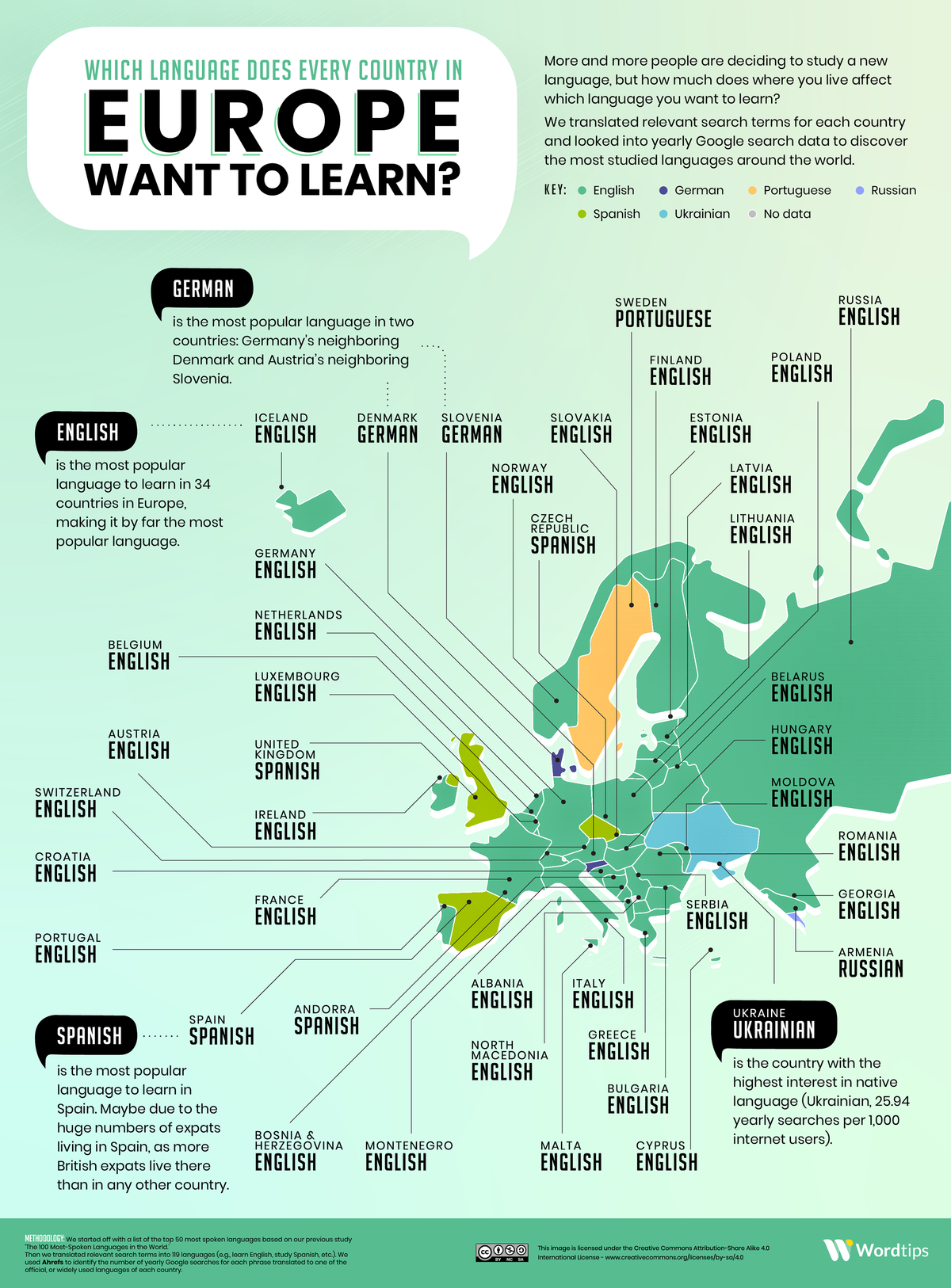 But a few countries differ from the norm—for instance, German is the most popular language to learn in Denmark. In a small Southern region of Denmark, German is the official minority language. And according to World Atlas, up to 20,000 ethnic Germans live in the area, with about 8,000 speaking standard German as their native tongue.

In the UK, Spanish takes the top spot. But more interestingly, Spanish is also Spain’s most popular language to learn, which seems counterintuitive. However, it could be because of Spain’s high concentration of British expats. According to BBC News, there are more than 300,000 British expats currently living in Spain.

While English is the most popular language to learn in various countries, it’s also the most spoken language worldwide, with approximately 1.1 billion total speakers—that’s roughly 15% of the global population.

And with more people interested in learning English, it looks like it could remain the world’s lingua franca (a common language among people who don’t speak the same native language) for years to come.

Comparing the Size of The World’s Rockets, Past and Present