How Do Big Tech Giants Make Their Billions?

Visualizing the World’s Loss of Forests Since the Ice-Age

Seeing Red: Is the Heydey of Pandemic Stocks Over?


View the high resolution of this infographic by clicking here.

Strong brands create an emotional link with consumers, and tech brands are no exception.

In fact, Google, Amazon, Netflix, and even eBay rank as some of the most searched consumer brands worldwide. It’s hard to imagine life without these household names, but how do brand preferences shift and change across internet searches worldwide?

This graphic from Business Financing compiles 12 months of data from the Google Keyword Planner and other sources, to uncover the world’s most searched consumer brands.

Note: Due to data constraints, a number of countries on the map do not have sufficient information available.

In Tech We Trust

By far, the world’s most searched consumer brand is Google, which seems very convenient.

It ranks at the top in 100 countries—that’s nearly half of all countries on the planet. With over 90 billion visits monthly, Google has unparalleled dominance in brand loyalty and website traffic.

Netflix, falling in second, ranks highest in 45 countries including Turkey, Brazil, and South Korea. In third, Amazon is the most popular in 30 countries. The only non-tech company in the top five is IKEA, in fifth place, after eBay.

When it comes to sub-sectors of consumer brands, the gaming space tells an interesting story.

Namely, it is Epic Games—creator of Fortnite and Grand Theft Auto—that dominates global charts by a considerable margin. Founded in Potomac, Maryland, the company ranks at the top for 141 countries globally.

Additionally, Nintendo tops the list of 24 countries including Japan, Haiti, and Canada, while Paris-based Gameloft comes next in line.

Since its founding in 1964, Nike has become a remarkable brand builder. In fact, Nike is the most searched fashion brand among 49 countries.

Interestingly, founder Phil Knight only began to fully understand branding power after the company reached $1 billion in revenues. After a series of failures and missteps in the mid-1980s, Nike switched its focus from marketing and manufacturing, to instead, zeroing in on the consumer. 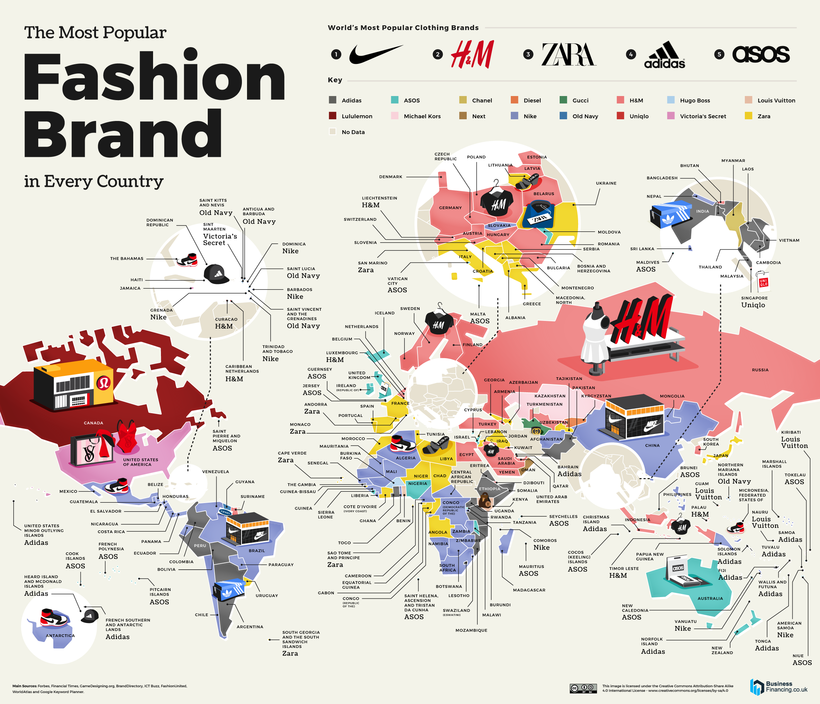 Like Nike, Swedish retailer H&M has a long history dating back to 1947. Prior to the pandemic, the fast-fashion retailer operated 5,000 stores globally. Since pandemic tailwinds, however, H&M plans to close 250 physical stores in 2021 and focus more on online sales.

Big Macs are Here to Stay

When you look closer at the most searched fast food chains, McDonald’s ranks highest on a global level, but not by far.

KFC comes in second, topping the list of 65 countries including Russia, Peru, and Thailand. Meanwhile, Pizza Hut, which is owned by the same parent company as KFC, attracted the highest number of searches in America. 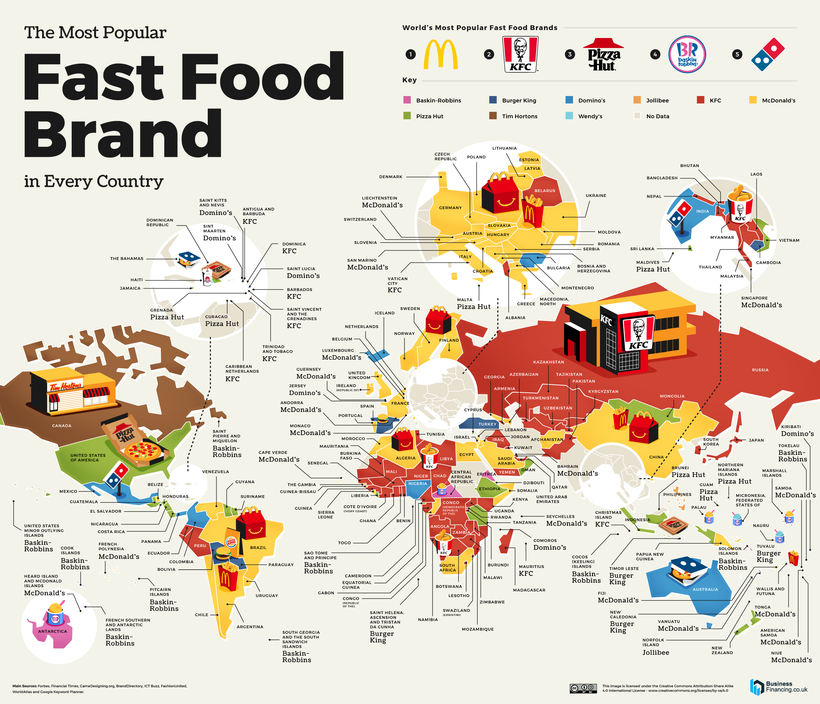 View the high resolution of this infographic by clicking here

On the other hand, Antarctica curiously ranks Baskin Robbins at the top, but this could be influenced from a low volume of searches in the region.

If there’s one recurring trend across the top consumer brands, it’s that they are unsurprisingly dominated by big players concentrated in America.

However, notable outliers are present. In China, search engine Baidu ranks as the top consumer brand on the internet. On the other hand, the Vatican’s most-searched gaming company is Canada-based BioWare, which developed the Mass Effect series (no pun intended).

Meanwhile, in Saint Helena—the island where Napoleon was exiled and later died—has Burger King as its most searched fast food brand. As it happens, the remote island appears to have no Burger King, or any other fast food chains. Kenya’s top fashion brand is Louis Vuitton, while Turkmenistan’s is Gucci.

Despite these differences, many consumer preferences, at least according to search volume, appear strikingly similar on global levels. As many of these multinational brands continue to gain even greater market share, the implications for the global consumer will be interesting to watch in the next year, or even decade.

WordPress Contributors Discuss Scaling Back Releases: “4 Major Releases Is Not a Viable Plan in 2021”