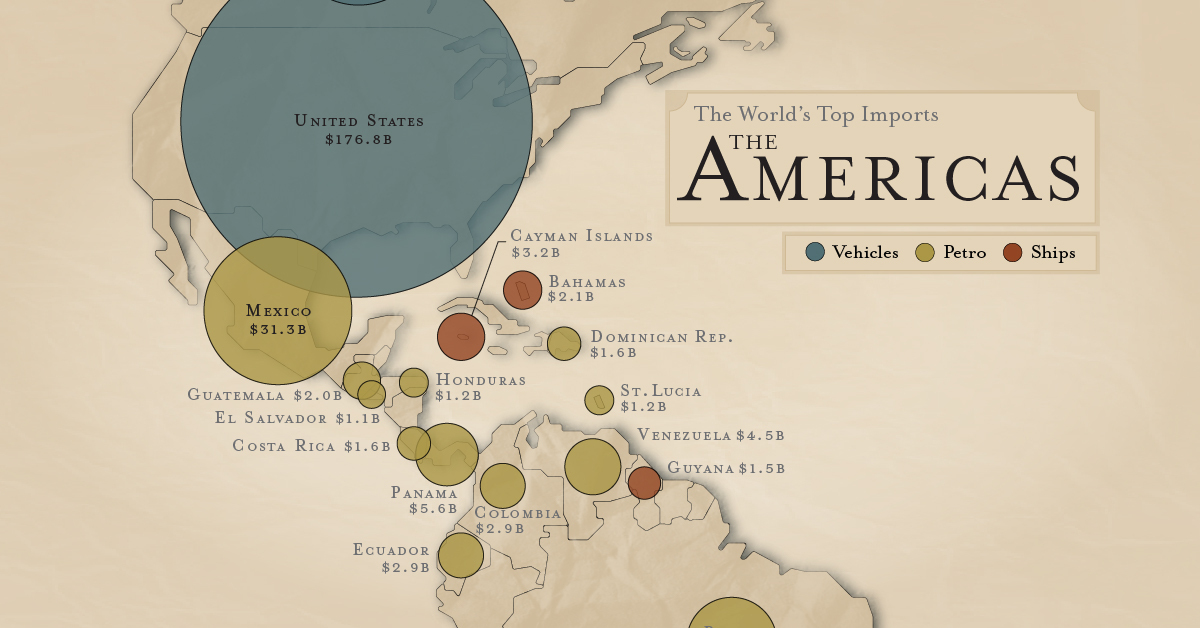 The Top Import in Each Country: The Americas

Almost all nations across the globe import goods from other countries. But what types of products are in high demand, and to what degree are these hot commodities exchanged worldwide?

Today’s graphic provides an overview of the top imports across the Americas. For brevity, we’ve excluded regions with an import value below $1 billion.

The Top Imports, by Country

Petroleum is the most popular import across the Americas region. In fact, it’s the top import in 15 of the 22 countries included on this list:

Vehicles are the second most popular, ranking as the number one import in four of the 22 countries. Cars are particularly popular in Northern America— they’re the top import in both the U.S. and Canada.

Lastly, ships place third, snagging the top spot in three of the 22 countries. Interestingly, two of these nations are in the Caribbean.

The Top 10 Regions, by Import Value

When looking at which nations import the most of their top product, the U.S. leads the pack.

In 2018, the U.S. imported $176.8 billion worth of foreign vehicles—around $147 billion more than its northern neighbor, Canada:

The U.S. relies heavily on Mexico for its foreign vehicles—it imported over 2 million light vehicles from south of the border in 2018. Manufacturing of vehicles and associated parts makes up nearly 18% of Mexico’s total exports.

Yet, while the U.S. imports a lot of foreign cars, the country exports its fair share of vehicles as well, especially to Canada. In fact, the U.S. is Canada’s top source for imported vehicles.

The high volume of trade between Mexico, the U.S. and Canada is fairly unsurprising, given the trade agreement between the three countries. Since the North American Free Trade Agreement (NAFTA) came into effect in 1994, Mexico in particular has seen a significant boost in trade activity. In 2018, imports accounted for 39% of Mexico’s GDP—a 21 percentage point rise from 1994.

»To learn more about the top imports worldwide, read our full article Mapped: The World’s Biggest Importers in 2018

Snapchat: The Most Popular Social Media Among U.S. Teens

Build an Elementor Website From Scratch in an hour!