How Do Big Tech Giants Make Their Billions?

Visualizing the World’s Loss of Forests Since the Ice-Age

Seeing Red: Is the Heydey of Pandemic Stocks Over? 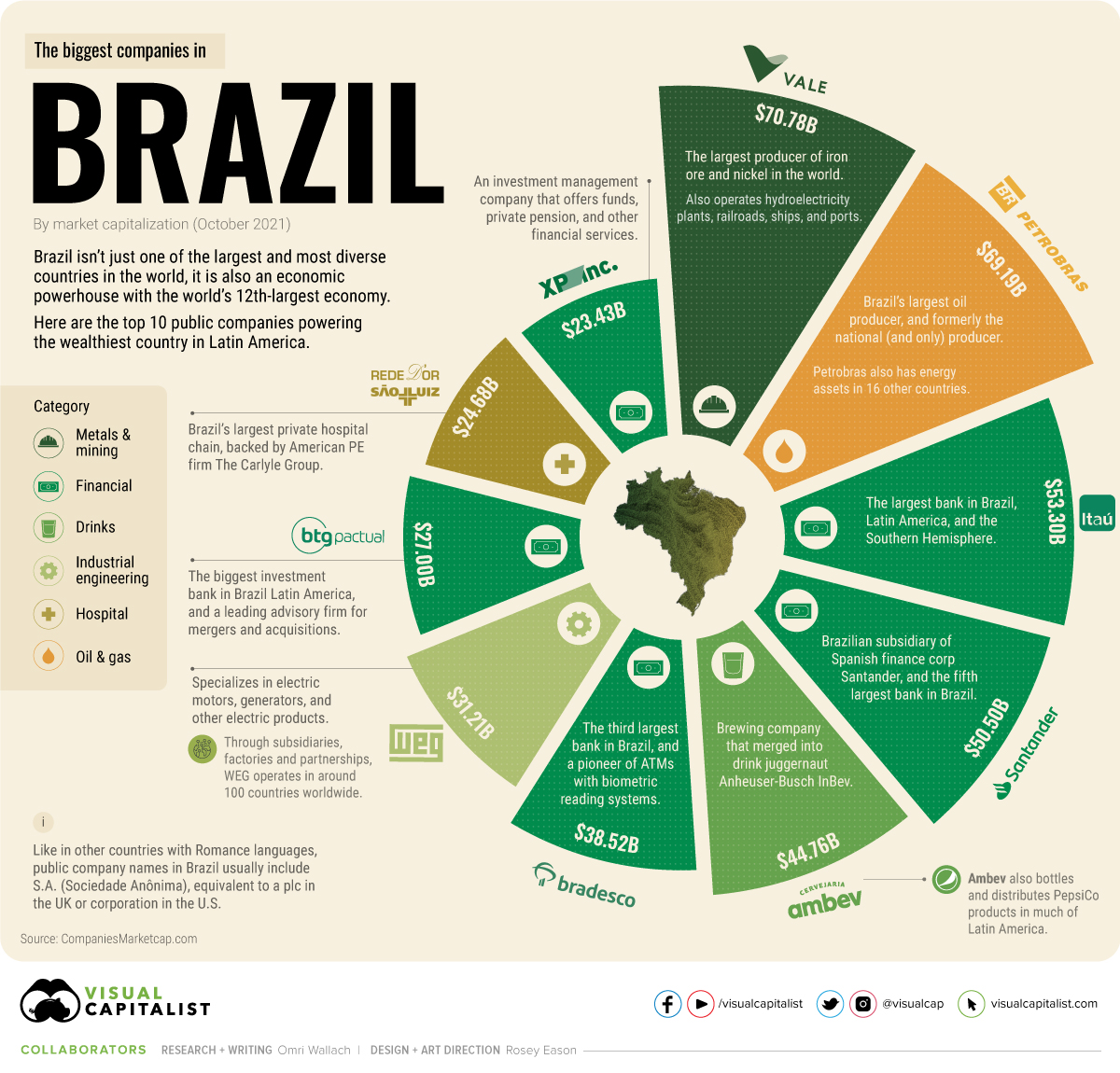 In 2009, the at-the-time emerging economies of Brazil, Russia, India, and China held their first formal summits as members of BRIC (with South Africa joining in 2010).

Together, BRICS represents 26.7% of the world’s land surface and 41.5% of its population. By GDP ranking, they’re also some of the most powerful economies in the world.

But what drives their economies? We’re highlighting the top 10 biggest companies in each country, starting with Brazil.

What Are the Biggest Public Companies in Brazil?

Brazil isn’t just one of the largest and most diverse countries in the world, it is also an economic powerhouse.

With over 213 million people, Brazil is the sixth most populous country on Earth and the largest in Latin America. It’s also the wealthiest on the continent, with the world’s 12th-largest economy.

Once a colony focused on sugar and gold, Brazil rapidly industrialized in the 20th century. Today, it is a top 10 exporter of industrial steel, with the country’s economic strength coming chiefly from natural resources and financials.

At the top of the ranking is Vale, a metals and mining giant that is the world’s largest producer of iron ore and nickel. Also the operator of infrastructure including hydroelectricity plants, railroads, and ports, It consistently ranks as the most valuable company in Latin America.

Other than former monopolies, the top 10 biggest companies in Brazil highlight the power of the banking sector.

Five of the 10 companies with a market cap above $25 billion are in the financial industry.

They include Itaú Unibanco, the largest bank in the Southern Hemisphere, and Banco Santander Brasil, the Brazilian subsidiary of Spanish finance corp.

Another well-known subsidiary is brewing company Ambev, which produces the majority of the country’s liquors and also bottles and distributes PepsiCo products in much of Latin America. Ambev is an important piece of Belgian drink juggernaut Anheuser-Busch InBev, which is one of the world’s largest 100 companies.

Noticeably missing from the top 10 list are companies in the agriculture sector, as Brazil is the world’s largest exporter of coffee, soybeans, beef, and ethanol. Many multinational corporations have Brazilian subsidiaries or partners for supply chain access, which has recently put a spotlight on Amazon deforestation.

What other companies or industries do you associate with Brazil?

The post The Top 10 Biggest Companies in Brazil appeared first on Visual Capitalist.

Visualizing the Fastest Trains in the World

Autoimmune Disorders: Is Your Child At Risk of PANS or PANDAS?