The Plus Addons for Gutenberg Plugin to Launch Soon
Advertisement 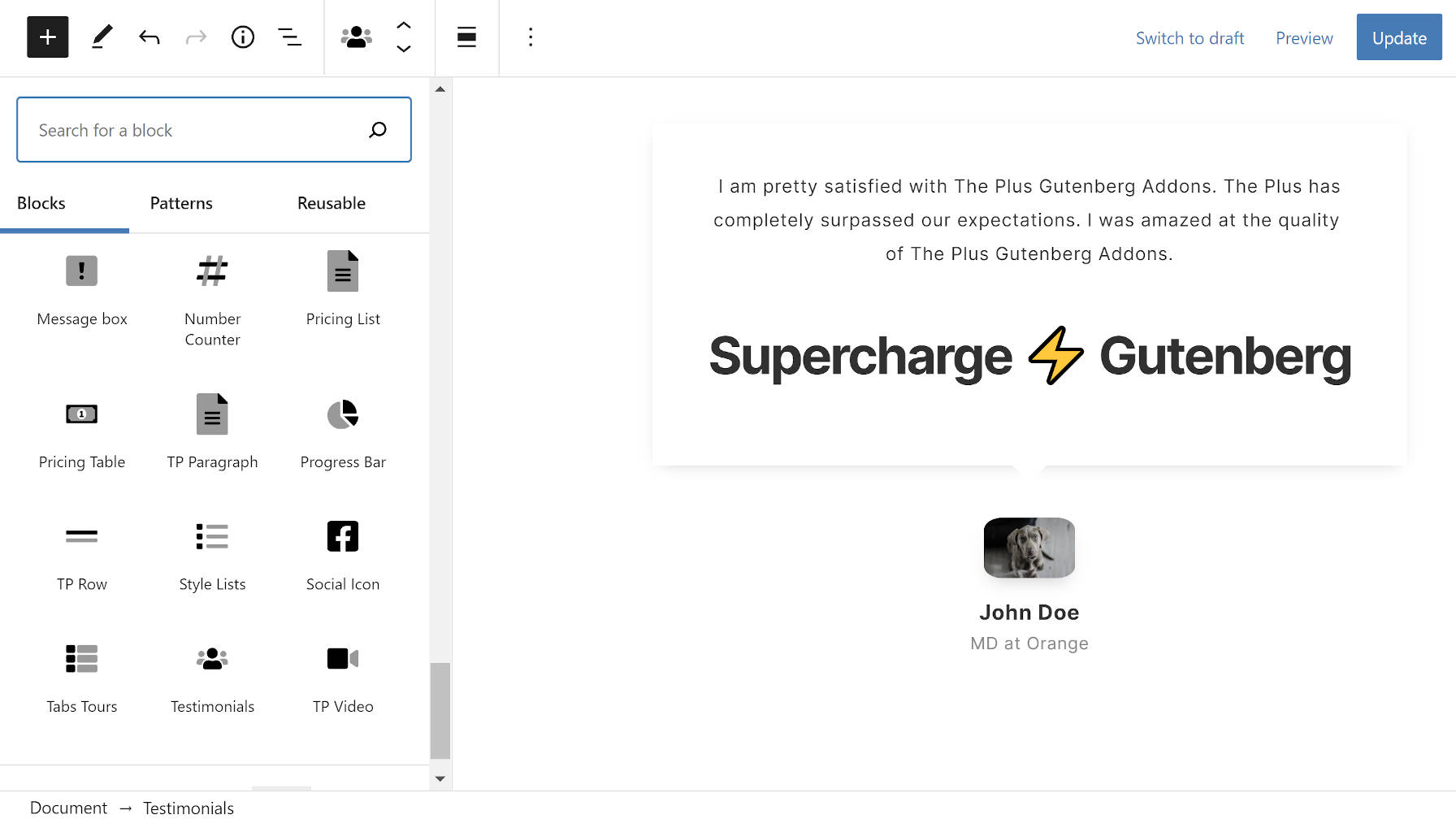 WordPress development company POSIMYTH is getting set to announce its venture into block development in the coming days. The new plugin, The Plus Addons for Gutenberg, is a collection of blocks, templates, and additional features for building sites with the block editor. The plugin is currently awaiting review for inclusion in the WordPress.org plugin directory. I was able to snag a test version and have been using it for around a week.

The POSIMYTH team began working as an outsourcing agency in 2013. Since then, it has worked on over 1,000 projects. The company eventually began building WordPress themes and plugins for the Envato Marketplace. It has continued to grow and currently serves more than 50,000 customers.

“Being an outsourcing company in the past, we have always felt the need for one-stop solutions for agencies and freelancers,” said Sagar Patel, the founder and director at POSIMYTH Innovations. “We have built many Gutenberg field components from scratch as well as in-depth options in blocks, which will not just be for simple tasks, it will be for complex layouts and options as well.”

One of the company’s most-used products is its The Plus Addons for Elementor plugin. The free version currently has over 9,000 active installations. Patel describes it as a “complete package” for building Elementor-based websites.

“Our Gutenberg version will be kind of a recreation of our Elementor version, but on top of that, we are adding more options and features based on our feedback from Elementor users,” he said. “Some blocks are completely revamped and made with a unique concept, but some are just a recreation of the Elementor version. For example, our Popup Builder, Countdown, Global Features, and some others are completely made from scratch with a new structure.”

The company recently surveyed over 1,000 its users. One of the points they noted is that many of those users wanted to use WordPress’s built-in block editor. However, they were unable to find reliable options for building complex websites. The results of this survey are one of the primary reasons the company is building this plugin.

The free version of The Plus Addons for Gutenberg will launch with 29 blocks, 16 of which are free and 13 freemium ones with commercial upgrades. The commercial/pro version of the plugin will add an extra 11 blocks along with several shapes, tooltips, effects, and other options. Pricing is expected to start at $39 per year for its lowest tier.

The plugin also has global color and typography options. These should not be confused with WordPress’s upcoming Global Styles system. The two features work similarly. However, the plugin’s system only works with its blocks instead of the entire website.

The terminology could pose some confusion for users. There will also be some crossover between the two systems, both handling the same needs. Patel said he is aware of this and will always work to make sure the plugin respects WordPress’s built-in Global Styles system. “We will always keep that in sync with our global options,” he said. “It’s still in the initial stage. We will keep on updating based on feedback from users and as per the updates of the Gutenberg team.”

Many of the block options are similar to what Editor Plus is doing for the core WordPress blocks. However, the options are for the plugin’s custom blocks only. The UI feels polished enough that you feel like the design team has been here before and knows what it is doing. Some plugins do not get to that point until version 2 or 3. I was able to navigate the block options with ease.

However, some blocks were out of place. For example, the Style Lists block could have simply been custom options tacked onto the WordPress List block. Adding list items in the block sidebar is not as natural as in the editor’s content area. The end-goal is to simply make a standard list. Everything else is simply eye-candy. Ideally, the plugin would relegate those options to the core block.

The same could be said of the Blockquote, TP Button, TP Image, and others. These could be extensions of the core WordPress blocks. Other blocks like the TP Heading, TP Paragraph, and Testimonials might be better served as custom patterns.

The concept of building custom, in-house blocks seems to be more prevalent each day as more plugin companies release block libraries. The trend will likely continue. The block system is reasonably extendable. Recreating the wheel is unnecessary.

The Plus Addons for Gutenberg’s blocks are well done, and it is hard to fault a plugin for having a consistent experience across its custom blocks.

Overall, the plugin does not offer any groundbreaking ideas for new blocks. Most of these are available in other, similar block libraries. What sets this plugin apart is the development team’s work on packing a ton of block options into an easy-to-use interface.

Patel said he does not consider the team to be in competition with anyone else in the market. “We are on a mission to provide a one-stop solution for all needs of WordPress website designers and developers.” The goal is to make it easy for freelancers and agencies to build complex layouts in the block editor without writing code.

The project’s website currently touts the availability of predesigned templates. The team decided not to include this feature in its initial free version, focusing on the other features in the plugin instead. Patel wants to assure users that templates will be available in both the free and pro versions of the plugin.

“[Templates] will be available in a couple of months or early after the initial free version’s launch,” he said. “We will have UI blocks, homepage templates, as well as full-site demos with multiple pages in that.”