The Number of EV Models Will Double by 2024
Advertisement

Timeline: The Rise, Fall, and Return of the Hummer

Visualizing All Electric Car Models Available in the U.S.

How Automaker Logos Have Evolved Over the Past Century

The Decline of U.S. Car Production

How Has Car Safety Improved Over 60 Years?

Ranked: The 35 Vehicles With the Longest Production Runs 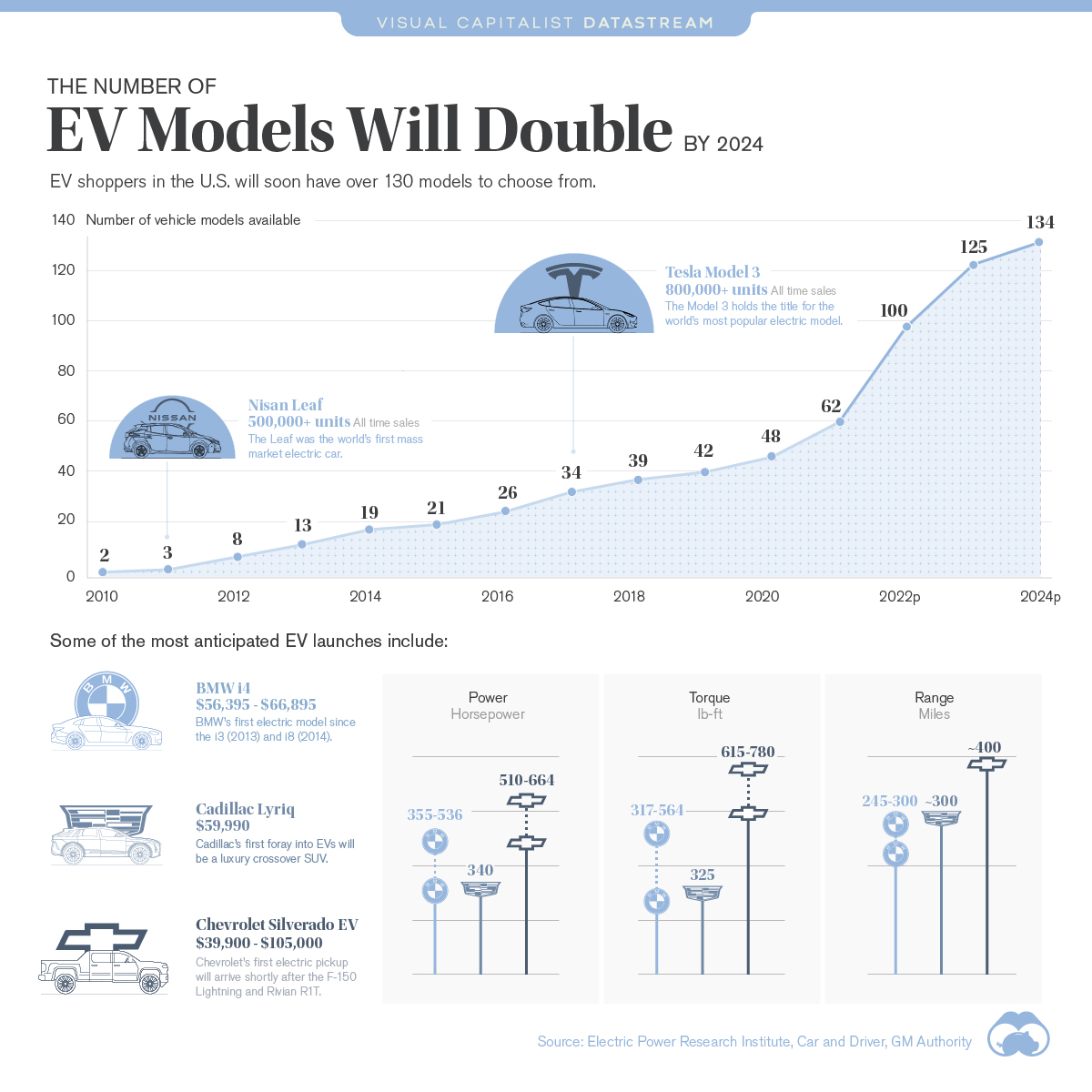 The Number of EV Models Will Double by 2024

Buyers in the market for an EV will have plenty of options to choose from over the next few years. It’s expected that there will be 134 models on sale in the U.S. by 2024—more than double of what’s available today.

Note: These figures may include variations of the same model. Example: The Tesla Model 3 comes in Base, Long Range, and Performance trims.

This wave of new electric models is being primarily driven by legacy automakers, many of whom are entering the EV market for the first time. For industry leader Tesla, it means that there is greater competition on the way.

This greater variety of vehicles comes at a time when interest in owning an electric vehicle is rising. In a recent survey from Morning Consult, the majority of American adults (51%) now report being very or somewhat likely to purchase a fully electric vehicle over the next decade.

Millennials are the most likely to be considering an EV as their next vehicle (70%).

Truck buyers have been waiting for their turn to experience electric power, and legacy brands like Ford, Chevrolet, and GM are ready to deliver.

Models include the recently announced Chevrolet Silverado EV, which should arrive shortly after the F-150 Lightning and Rivian R1T electric pickups. GM is also teasing its upcoming Hummer EV, which promises a whopping 1,000 horsepower.

Pickups and SUVs typically generate higher margins for automakers, so this next wave of EV models is an opportunity they won’t want to miss.

Where does this data come from?
Source: Electric Power Research Institute via Morning Consult, GM Authority, and Car and Driver

The post The Number of EV Models Will Double by 2024 appeared first on Visual Capitalist.

The Evolution of Institutional ETF Use Cases