Chart: 30 Years of Wildfires in America

How Genetically Similar Are We To Other Life Forms?

How Many Hours Do Americans Lose to Traffic Congestion?

Ranked: The Fastest Growing Cities in the U.S. 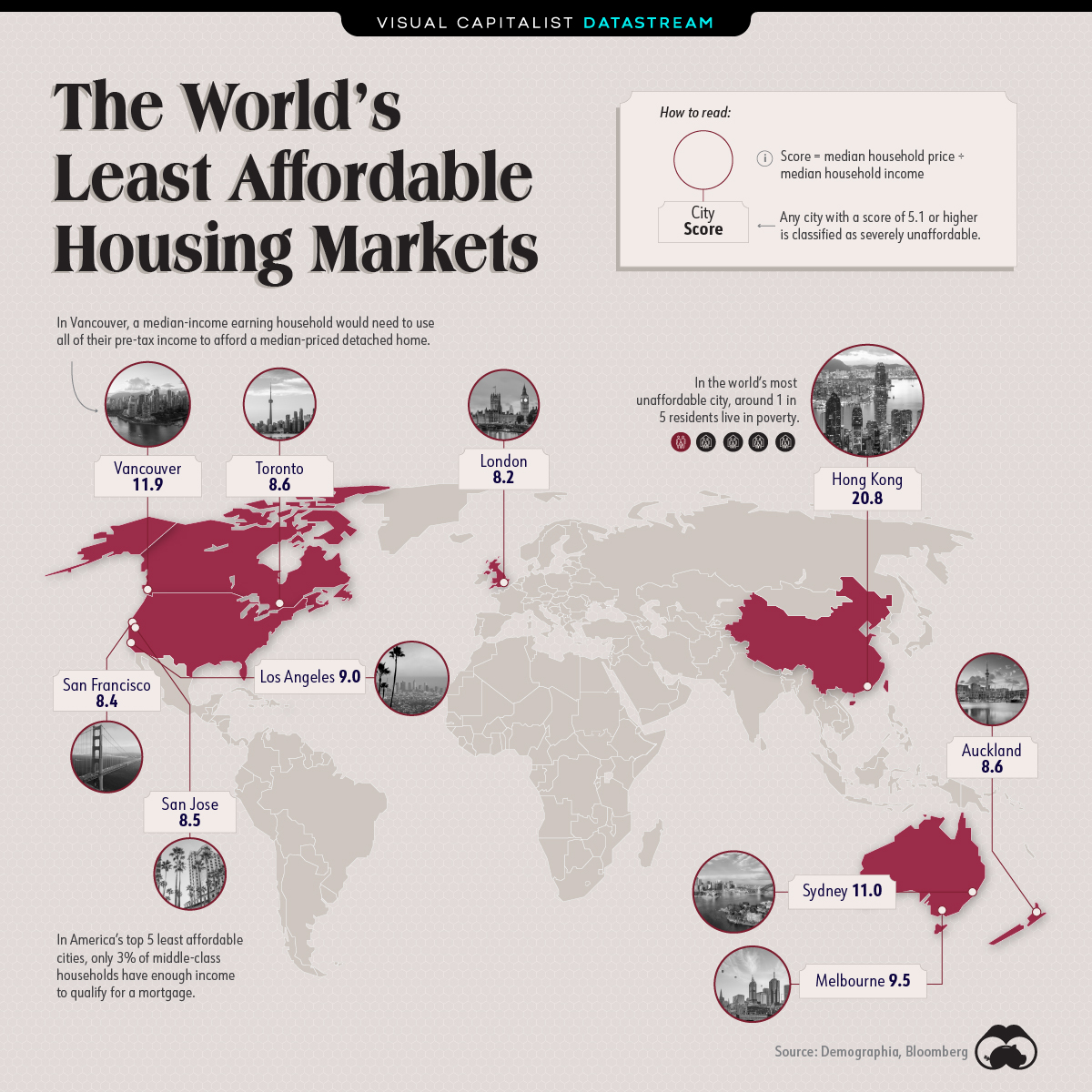 Ranked: The World’s Least Affordable Cities to Buy a Home

In certain parts of the world, housing prices have risen much faster than household incomes, making home ownership increasingly more difficult for the average Joe.

Using data from Demographia published in 2020, this graphic looks at some of the world’s most expensive housing markets.

It’s worth noting that this data looks at housing affordability specifically for middle-income earners. While it’s far from globally exhaustive, it measures affordability in 309 major metropolitan areas across Australia, Canada, Hong Kong, Ireland, New Zealand, Singapore, the U.S., and the UK.

In this study, a city’s affordability is calculated by taking its median housing price and dividing it by the median household income.

All the cities on this graphic classify as severely unaffordable. Perhaps unsurprisingly, Hong Kong is the most unaffordable housing market—scoring 20.8 to take the top spot.

Home to 7.5 million people, Hong Kong has ranked as the world’s least affordable city for 10 consecutive years. Because of its steep housing prices, nano apartments have risen in popularity over the last decade.

The Most Affordable Housing Markets

Three of the most expensive housing markets are in America, but at the same time, the country also contains some of the most affordable markets in the eight-country study, too.

In fact, the top 10 most affordable cities are all in America:

Keep in mind, these figures are from Q3’2019. Considering the pandemic-induced suburban shuffle that’s been going on in some of America’s major housing markets, this list could look a bit different in Demographia’s next report.

Source: Demographia
Details: Affordability score is calculated by taking a city’s median housing price and dividing it by the median household income. Anything over 5.1 is considered severely unaffordable
Notes: Data includes 309 metropolitan markets across eight countries, including Australia, Canada, the U.K., and the U.S., as of the third quarter of 2019