Mapped: The 25 Poorest Countries in the World 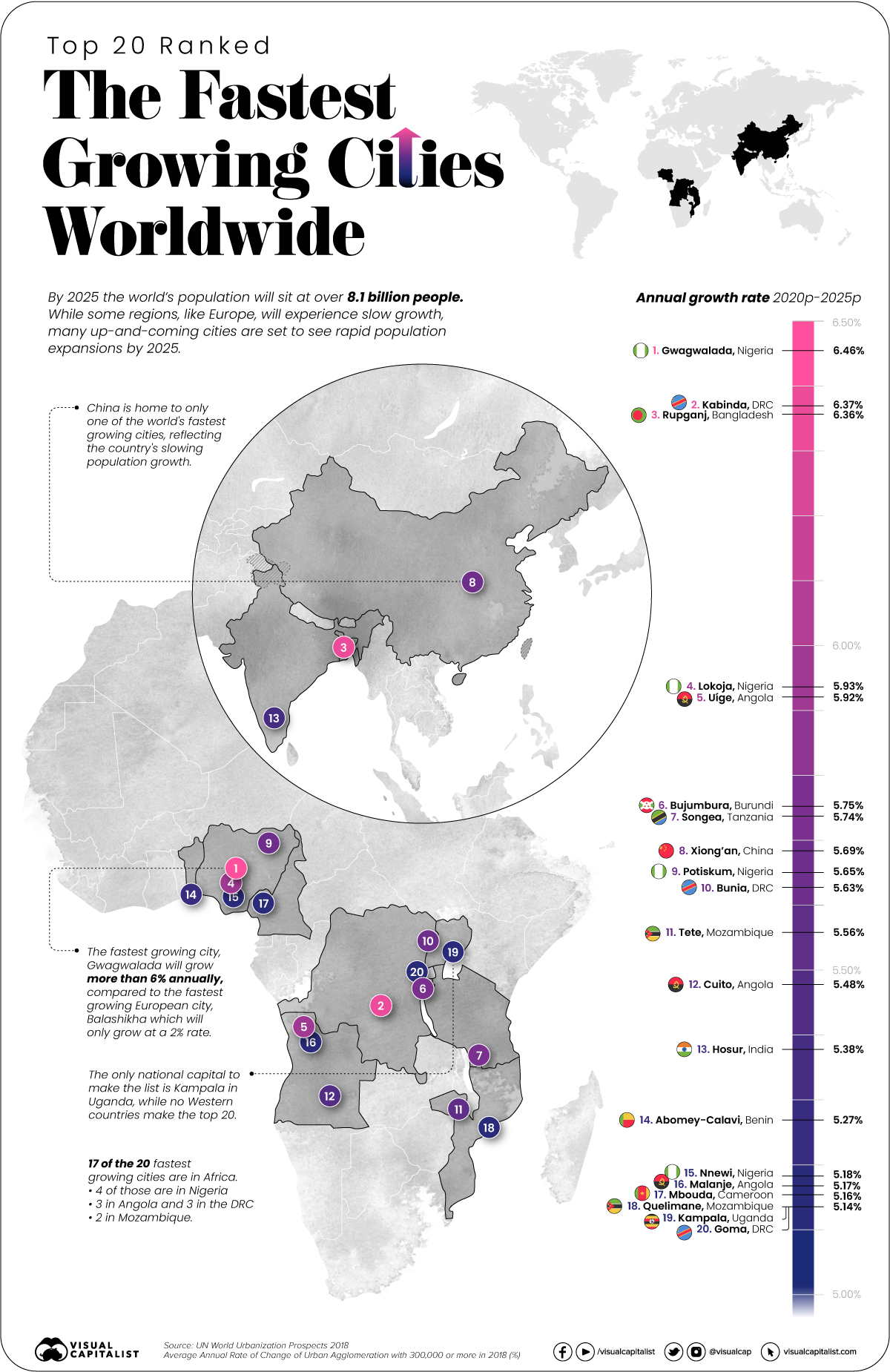 By 2025, the world’s population will reach over 8.1 billion people.

Most of that population growth will be concentrated in cities across Africa and Asia. To help paint a detailed picture, this map uses data from the United Nations to rank the top 20 fastest growing cities in the world in terms of average annual growth rate from 2020 to 2025.

The majority of the world’s fastest growing cities are located in Africa—in fact, 17 of the 20 are located on the continent, with four of the 20 cities being located in Nigeria specifically.

Population growth is booming across the entire continent, as many countries retain high birth rates. According to the World Bank, the 2019 fertility rate (births per woman) in Sub-Saharan Africa was 4.6, compared to the global fertility rate of 2.4.

Nigeria’s economy is largely based on petroleum which has resulted in the country becoming one of the strongest economies in Africa. This, coupled with a high birth rate and a resulting young population, has given the country a strong and rising workforce.

However, the population growth in Nigeria is both a blessing and a curse. The success of the economy, among other factors, has resulted in excessive rural-to-urban migration. This mass exodus from rural areas has led to less farming, which means the country now needs to import basic food staples at a high cost.

In Mozambique, Tete and Quelimane are growing 5.56% and 5.14% respectively. The country is expected to experience strong economic growth after facing contractions due to the pandemic. Forecasts predict that the Mozambiques’s economy will grow 4% by 2022.

All of the top 20 fastest growing cities are located in either Africa or Asia, and they are far outpacing growth on other continents, such as Europe, for example.

By 2050, Sub-Saharan Africa will be home to close to 2 billion people and roughly half will be under the age of 25. This represents an enormous labor force and opportunities for innovation and growth. In fact, in navigating the pandemic, Africa is already starting to capitalize on digital advances in both traditional and new sectors.

China has its eye on Africa, as evidenced through their multiple investments in infrastructure projects in the continent. Additionally, NATO countries have recently committed to investing similar amounts in Africa to counter China’s influence.

In spite of the economic potential, increased city sizes could be problematic for some of these countries. They will need to adapt to the issues associated with mass urbanization, like pollution, overcrowding, and high costs of living.

Population booms can lead to massive economic growth, a larger (and younger) working population, and a growing domestic consumer market.

As the aforementioned cities continue their rapid expansion, and as people continue to flock to growing megacities in Africa and Asia, it could represent the beginning of an important economic shift that is worth keeping an eye on.

Which Schema Types Are Used Most by Industry [Research] via @sejournal, @MrDannyGoodwin