Ranked: The Most Populous Cities in the World
Advertisement

How Far Are We From Phasing Out Coal?

Mapped: All the World’s Military Personnel 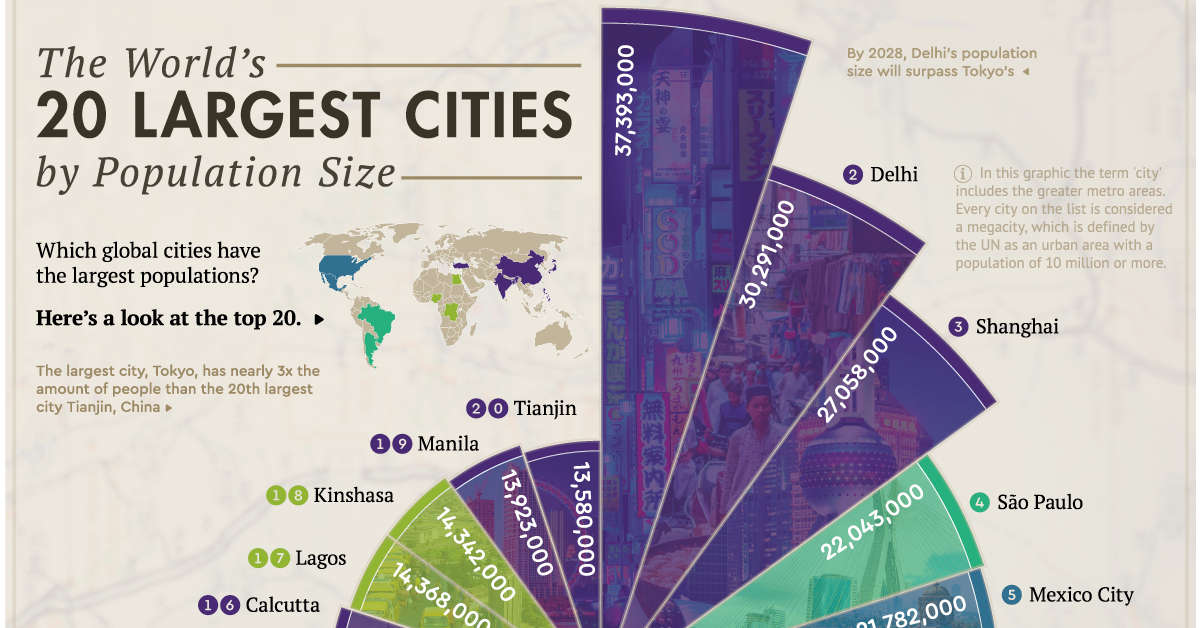 More than half of the world’s population currently lives in cities—and as time goes on, it’s clear that more urban dwellers will find themselves living in megacities.

Megacities are defined as urban areas with a population of more than 10 million people. This means that the world’s top 20 most populous cities are all megacities.

This visualization, using data from Macrotrends, shows the 20 most populous cities in the world.

Rural-to-urban migration is an increasingly relevant trend in the 21st century. Prospects of better job opportunities and higher wages, along with shifts from agrarian to industrial and service-based economies, are causing mass movement to cities.

How much have the world’s five most populous cities grown in just the last decade?

Interestingly, Mexico City placed third on the top largest cities list in 2010, but has since experienced slower growth compared to its competitors, Shanghai and São Paulo.

The Most Populous Cities Today

While Tokyo is the world’s most populous city with 37,393,000 people, this number is leveling out due to declining birth rates and an aging population.

Indian and Chinese cities, on the other hand, will continue to grow rapidly in the coming years. In fact, it’s expected that Delhi’s population could surpass Tokyo’s by 2028.

Here’s a closer look at the top 20 most populous cities.

By 2035, two new cities are expected to crack the top 20 list. Specifically, it’s projected that Bangalore (India) and Lahore (Pakistan) will boot out Tianjin and Buenos Aires. In addition, Guangzhou, Shenzhen, and Chennai are all expected to meet the megacity definition by 2035.

Urban growth will continue mainly in Asia and Africa, as some cities in regions such as Europe actually begin to shrink in population due to aging citizens and declining birth rates. Since 2012, deaths in the EU have actually been outpacing births—and in 2019, there were 4.7 million deaths compared to 4.2 million births, though net migration kept population numbers from falling.

Life in the City

While there are certainly downsides to mass urbanization, like pollution and overcrowding, the upsides clearly outweigh the negatives for most people. Convenience, better jobs, easier access to social services, and higher wages are among the many reasons people are likely to continue to move to cities, even in the post-COVID era.

With the emergence of smart and green cities, the quality of life for many urban dwellers will likely continue to improve, and more large urban areas will morph into megacities.

There’s no better time than now to … #CarpeDiem!…