Ranked: The Fastest Growing Cities in the U.S.
Advertisement

The U.S. States with the Top Tech Salaries in 2021

Interactive: How the U.S. Population Has Changed in 10 Years, by State

The Golden State: A Closer Look at Mining in California

Mapped: The Top 30 Most Valuable Real Estate Cities in the U.S. 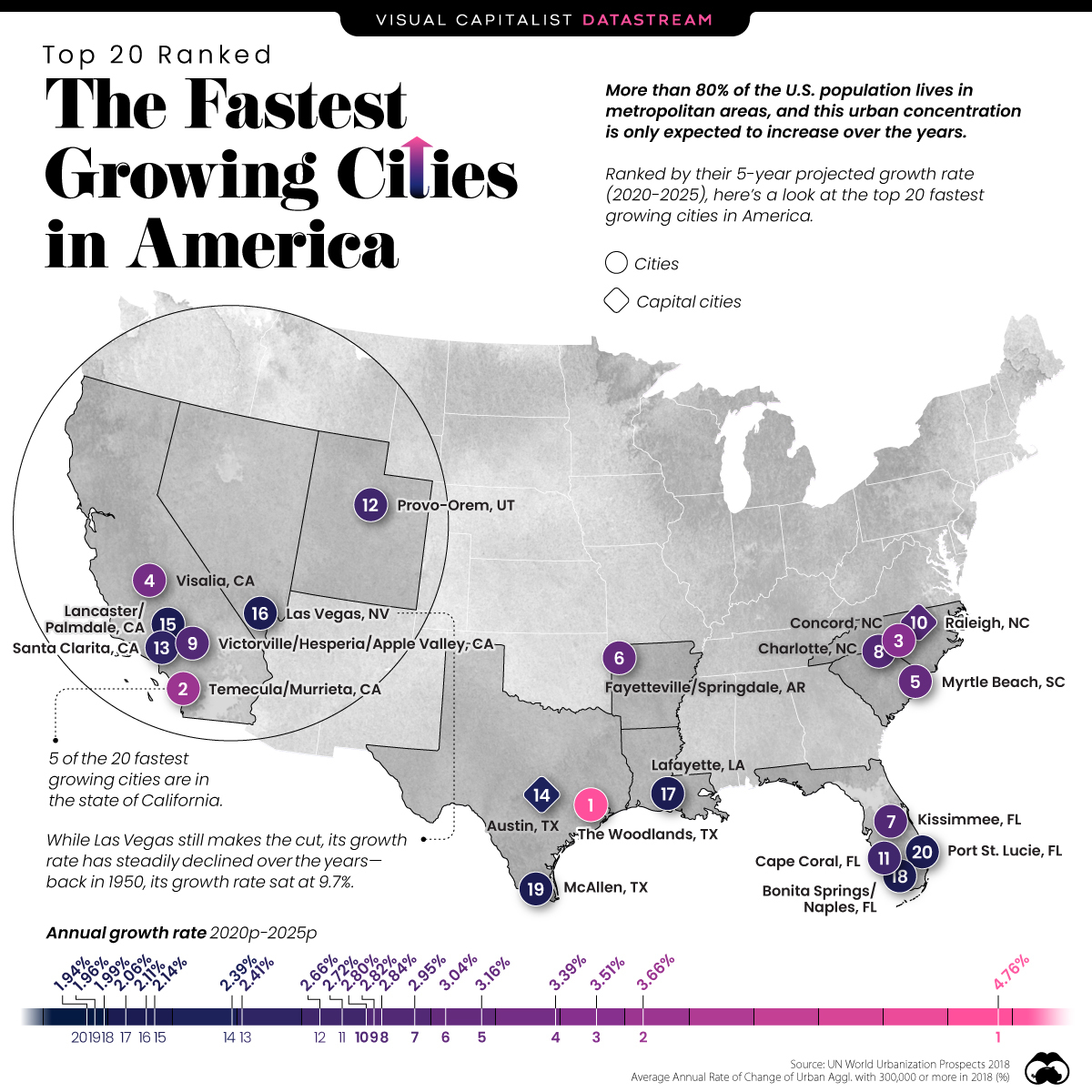 Ranked: The Fastest Growing Cities in the U.S.

The world has become increasingly more urbanized, especially in America. Despite being one of the largest countries on the planet, over 80% of the U.S. population currently is concentrated in key metropolitan areas, and this urban concentration is only expected to increase in the coming years.

Which U.S. cities are leading this growth?

Here are the fastest growing urban areas in the U.S. with over 300,000 residents, based on their projected annual growth rate from 2020 to 2025.

Coming in as America’s fastest growing city is The Woodlands, Texas. This Houston-adjacent community is projecting an extreme population increase, reflecting the rapid population growth of the state of Texas.

According to 2020 Census data, Texas is America’s third fastest growing state, with a population of over 29 million—that’s more than the entire population of Australia.

The second fastest growing city is Temecula-Murrieta, California, which lies in the center of the triangle formed by Los Angeles, San Diego, and Palm Springs. Despite the fact that five of the 20 fastest growing cities are in California, the Golden State’s overall population has been somewhat stagnant in recent years. In 2018, California’s population growth rate dipped to 0.47%—its slowest growth rate on record.

What contributes to a city’s population growth? According to academic research conducted by Gilles Duranton and Diego Puga, there are several key drivers that impact urban growth:

Duranton and Puga stress that municipal and city governments likely play a role in a city’s population growth too—however, more research on the topic is needed to confirm their hypothesis.

» Like this? Then check out the fastest-growing cities worldwide.

Source: UN World Urbanization Prospects 2018
Details:: The growth rate is measured by an average annual rate of change of urban agglomeration, with 300,00 or more in 2018 (%).

The post Ranked: The Fastest Growing Cities in the U.S. appeared first on Visual Capitalist.