Mapped: The 50 Richest Women in the World in 2021
Advertisement

5 Big Picture Trends Being Accelerated by the Pandemic 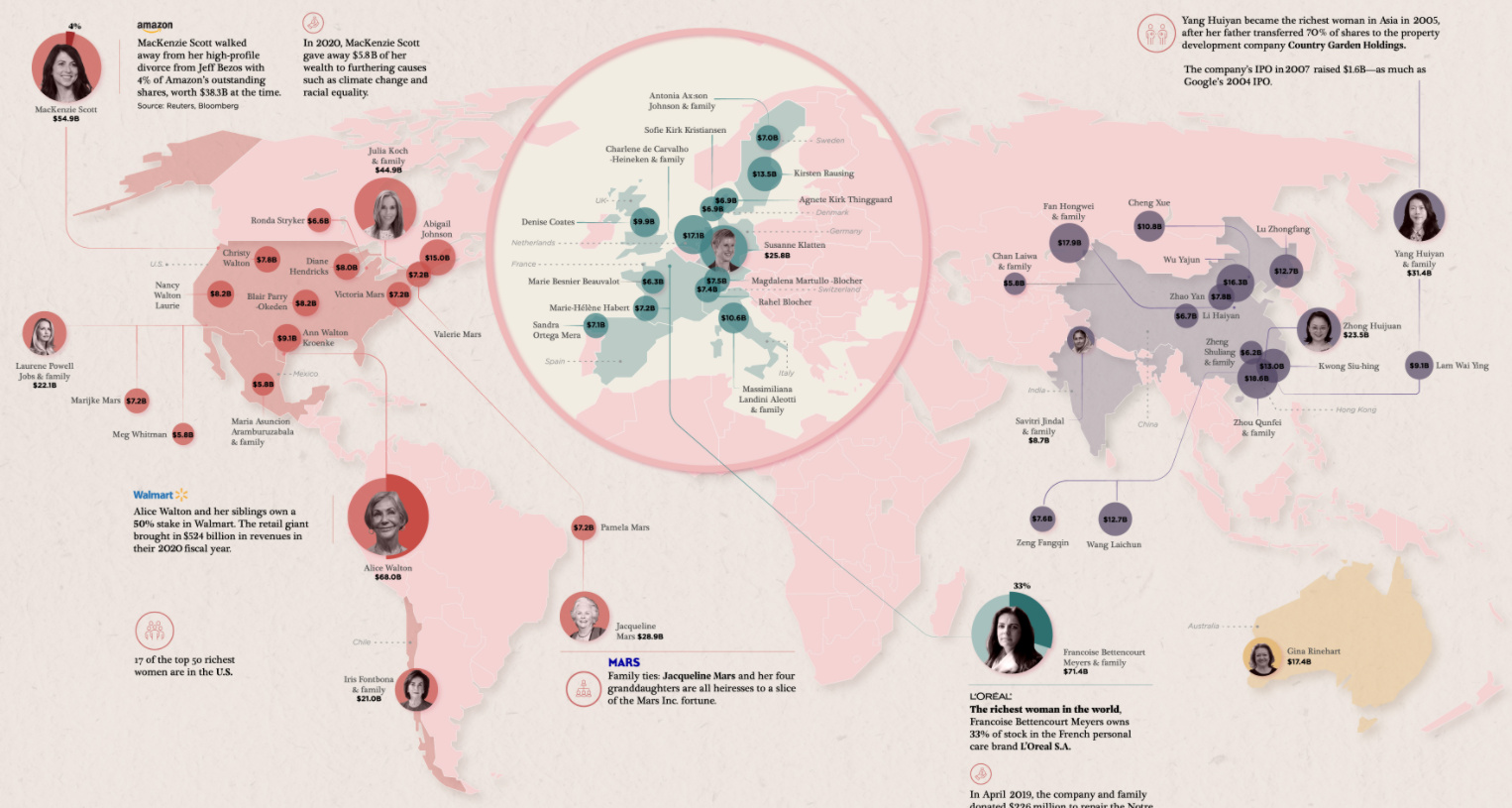 According to a recent census by Wealth-X, 11.9% of global billionaires are women. Even at such a minority share, this group still holds massive amounts of wealth.

Using a real-time list of billionaires from Forbes, we examine the net worth of the 50 richest women in the world and which country they’re from.

Where are the World’s Richest Women?

The richest woman in the world, Francoise Bettencourt Meyers and family own 33% of stock in L’Oréal S.A., a French personal care brand. She is also the granddaughter of its founder.

In April 2019, L’Oréal and the Bettencourt Meyers family pledged $226 million (€200 million) towards the repair of the Notre Dame cathedral after its devastating fire.

Following closely behind is Alice Walton of the Walmart empire—also the world’s richest family. Together with her brothers, they own over 50% of the company’s shares. That’s a pretty tidy sum, considering Walmart raked in $524 billion in revenues in their 2020 fiscal year.

Other family ties among the richest women in the world include Jacqueline Mars and her four granddaughters, heiresses to a slice of the Mars Inc. fortune in candy and pet food—and all of them make this list.

MacKenzie Scott, ranked #3 on the list, was heavily involved in the early days of turning Amazon into an e-commerce behemoth. She was involved in areas from bookkeeping and accounts to negotiating the company’s first freight contract. Her high-profile divorce from Jeff Bezos captured the headlines, notably because she gained control over 4% of Amazon’s outstanding shares.

The total value of these shares? An eye-watering $38.3 billion—propelling her to the status of one of America’s richest people.

However, MacKenzie Scott has more altruistic ventures in mind for this wealth. In 2020, she gave away $5.8 billion towards causes such as climate change and racial equality in just four months, and is a signatory on the Giving Pledge.

[Scott’s near $6 billion donation has] to be one of the biggest annual distributions by a living individual.

Looking towards the East, Yang Huiyan became the richest woman in Asia after inheriting 70% of shares in the property development company Country Garden Holdings. The company went public in 2007, raising $1.6 billion in its IPO—an amount comparable to Google’s IPO in 2004.

While the 50 richest women in the world have certainly made progress, the overall tier of billionaires is still very much a boys’ club. One thing that also factors into this could be the way this wealth is spent.

As many female billionaires inherited their wealth, a large share are more inclined to contribute to charitable causes where they can use their money to make an impact. What percentage of billionaires by gender have contributed at least $1 million in donations over the past five years?

Meanwhile, male billionaires are more likely to donate to charity if they built the wealth themselves—and many companies that fall into this category certainly stepped up during the early days of the COVID-19 crisis.

Rendering the WordPress philosophy in GraphQL