The Top 100 Companies of the World: The U.S. vs Everyone Else

Mapped: The Top Trading Partner of Every U.S. State

How Powerful is Your Passport in a Post-Pandemic World?

RCEP Explained: The World’s Biggest Trading Bloc Will Soon be in Asia-Pacific

Visualizing the Importance of Fire Safety in High-rise Buildings 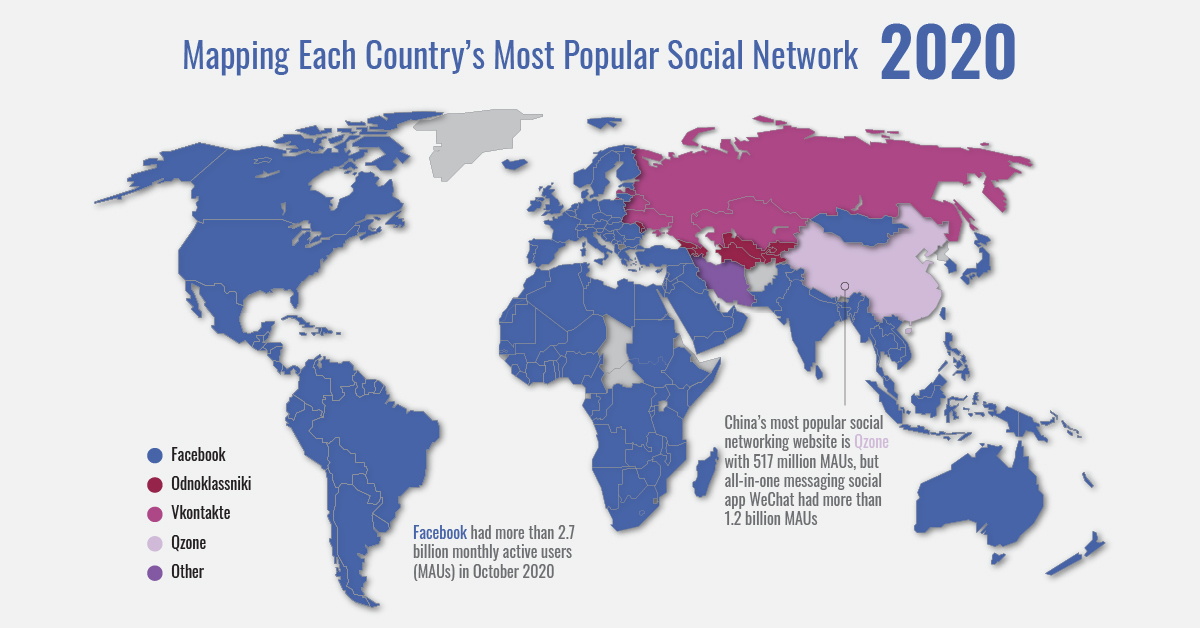 From just a few thousand users in 2004 to 2.7 billion monthly active users (MAUs) in 2020, Facebook is by far the world’s largest social network.

But its massive global footprint didn’t grow overnight. While Facebook is the most popular social network in many countries, this traction didn’t happen overnight. And in other places, it still hasn’t quite taken off.

To see Facebook’s path to domination, we mapped each country’s most popular social network from 2008‒2020. The data was tabulated by Vincenzo Cosenza at Vincos.it by examining annual traffic data from Alexa and SimilarWeb.

Before 2008, the social network landscape was populated by social network pioneers such as Myspace and Hi5. Google’s Orkut was the most popular network in Brazil and India, and Friendster found a foothold in Southeast Asia.

But the Facebook wave came in earnest. By 2009, the social media giant took the title of most popular network for the bulk of the Americas, Europe, South Asia, and Oceania, with Orkut in Brazil being the sole holdout until 2011.

The story was similar in Africa, as increasing internet traffic data pointed to Facebook dominating the social network landscape across the continent (minus a temporary LinkedIn surge in 2017 for Zimbabwe, Ethiopia, Kenya, and Cameroon).

By the beginning of 2020, Facebook was measured as the leading social network site in 151 out of 167 measured countries, or over 90%.

The social giant’s growth, however, didn’t come without resistance.

China’s most popular social networking website has been Tencent’s Qzone since the mid-2000s. WeChat—a popular all-in-one messaging platform—does not technically qualify for the above map as a “social networking website”, but the app now has more than 1.2 billion MAUs. Facebook had attempted to gain ground in the country but was banned in 2009.

Similarly in Iran, Facebook was also blocked first in 2009 and then intermittently since. Instead, Iran’s most popular social networks have been Persian sites Cloob and Facenama between 2009‒2016. Facebook did manage to capture the #1 spot briefly in 2011, but since then, they’ve been displaced by Facebook-owned Instagram.

The other countries that Facebook has had trouble capturing, despite not being blocked, are Russia and many former Soviet republics. There, social network dominance has switched regularly between the networks VKontakte and Odnoklassniki, both owned by Mail.ru, a Russian internet giant.

As big of a footprint as Facebook has on social networking, the tech giant’s reach is magnified when factoring in mobile apps that it also owns.

By Facebook’s own estimates in its Q3 2020 reporting, its core products are used by more than 3.2 billion people every month. That means that 40% of Earth’s population (7.8 billion in December 2020) uses Facebook-owned social media.

The question now is if Facebook’s domination will grow further, or if it’ll begin to subside.

With increasing scrutiny of tech giants, the company is facing massive antitrust lawsuits in the U.S. by federal and state authorities, and other countries are stepping up potential regulation as well. At the same time, Facebook is struggling to reach younger audiences in developed countries, which have increasingly turned to Snap and TikTok instead for social media.

Did 2020 mark the height of Facebook’s global empire, or is it just another milestone on the path towards further domination?