Mapped: Economic Freedom Around the World

How would you define a country’s economic freedom?

The cornerstones of economic freedom by most measures are personal choice, voluntary exchange, independence to compete in markets, and security of the person and privately-owned property. Simply put, it is about the quality of political and economic institutions in countries.

Based on the Index of Economic Freedom by the Heritage Organization, we mapped the economic freedom of 178 countries worldwide.

The index uses five broad areas to score economic freedom for each country:

But from Mauritius and smaller African nations being beacons of hope to East Asian and Oceanic countries epitomizing economic democracy, every region has a different story to tell.

Let’s take a look at the economic freedom of each region in the world.

Even though the U.S. and Canada continue to be some of the most economically free countries globally, some markers are suffering.

The regional average unemployment rate has risen to 6.9%, and inflation (outside of Venezuela) has increased to 5.2%. The region’s average level of public debt—already the highest globally—rose to 85.2% of its GDP during the past year.

Across many Latin American countries, widespread corruption and weak protection of property rights have aggravated regulatory inefficiency and monetary instability.

For example, Argentina’s Peronist government has recently fixed the price of 1,432 products as a response to a 3.5% price rise in September, the equivalent to a 53% increase if annualized.

More than half of the world’s 38 freest countries (with overall scores above 70) are in Europe. This is due to the region’s relatively extensive and long-established free-market institutions, the robust rule of law, and exceptionally strong investment freedom.

However, Europe still struggles with a variety of policy barriers to vigorous economic expansion. This includes overly protective and costly labor regulations, which was one of the major reasons why the UK voted to leave the EU. 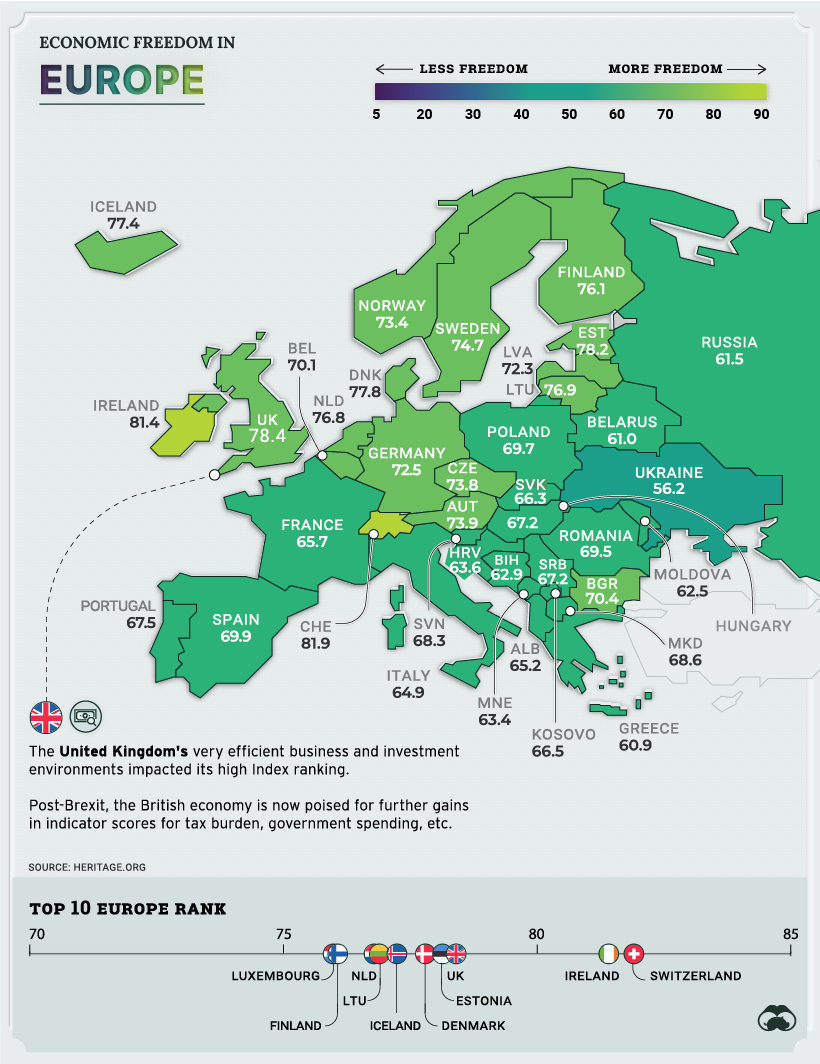 Brexit has since had a major impact on the region.

Even a year later, official UK figures showed a record fall in trade with the EU in January 2021, as the economy struggled with post-Brexit rules and the pandemic.

Dictatorships, corruption, and conflict have historically kept African nations as some of the most economically repressed in the world.

While larger and more prosperous African nations struggle to advance economic freedom, some smaller countries are becoming the beacon of hope for the continent. 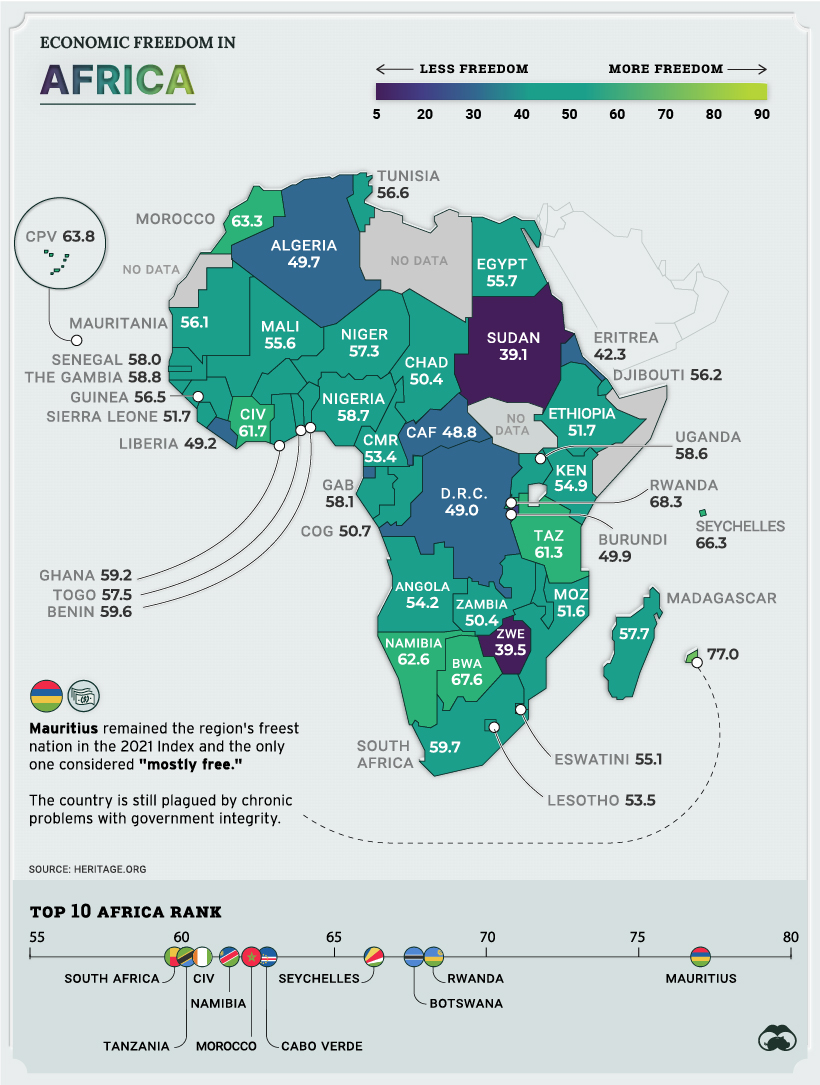 Mauritius (rank 11), Seychelles (43) and Botswana (45) were the top African countries, offering the most robust policies and institutions supporting economic self-sufficiency.

From property rights to financial freedom, small African countries are racing ahead of the continent’s largest in advancing economic autonomy as they look to build business opportunities for their citizens.

When Israel, the UAE, and Bahrain signed the Abraham Accords last year, there was a sense of a new paradigm emerging in a region with a long history of strife.

A year into the signing of this resolution, the effects have been promising. There have been bilateral initiatives within the private sector and civil society leading to increasing economic and political stability in the region. 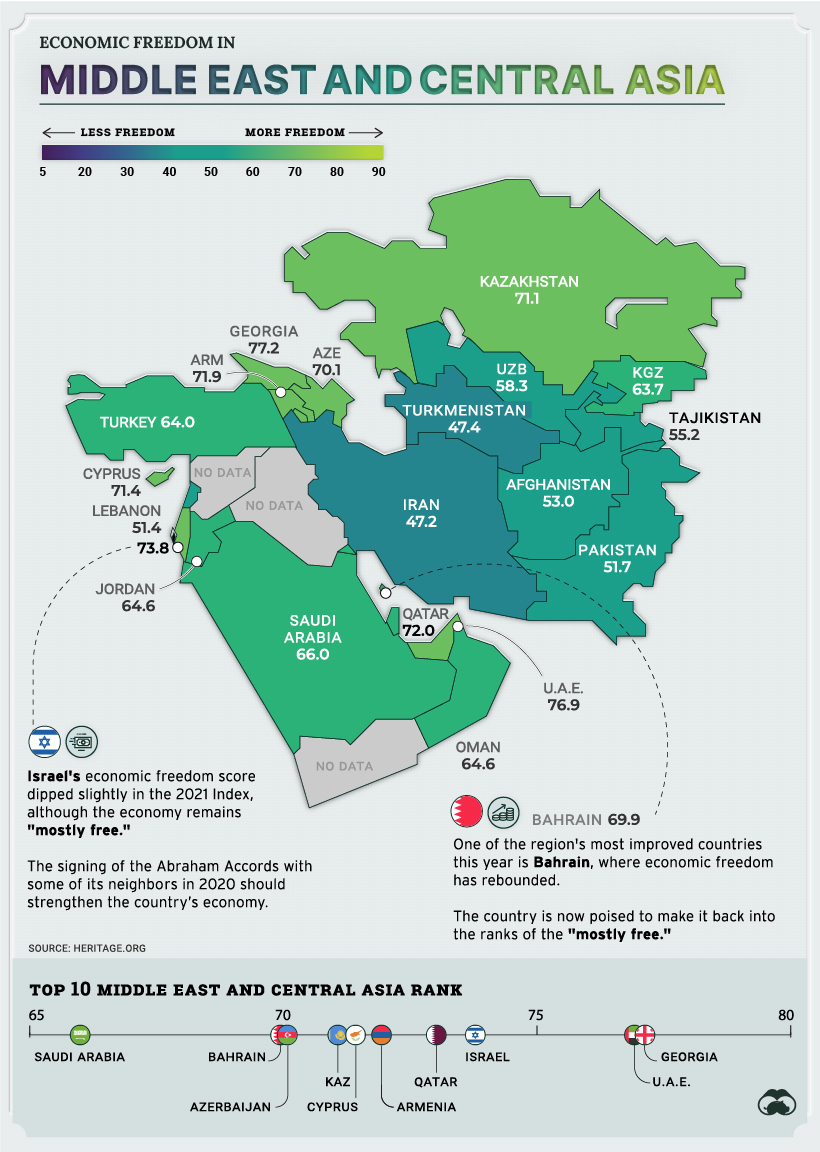 Central Asian countries once part of the Soviet Union have recently starting integrating more directly with the world economy, primarily through natural resource exports. In total, natural resources account for about 65% of exports in Kyrgyzstan, Tajikistan, and Uzbekistan, and more than 90% in Kazakhstan and Turkmenistan.

Despite this progress, these countries have a long way to go in terms of economic freedom. Uzbekistan (108), Turkmenistan (167) and Tajikistan (134) are still some of the lowest-ranked countries in the world.

Despite massive populations and strong economies, countries like China and India remain mostly unfree economies. The modest improvements in scores over the last few years have been through gains in property rights, judicial effectiveness, and business freedom indicators.

Nearby, Singapore’s economy has been ranked the freest in the world for the second year in a row. Singapore remains the only country in the world that is considered economically free in every index category. 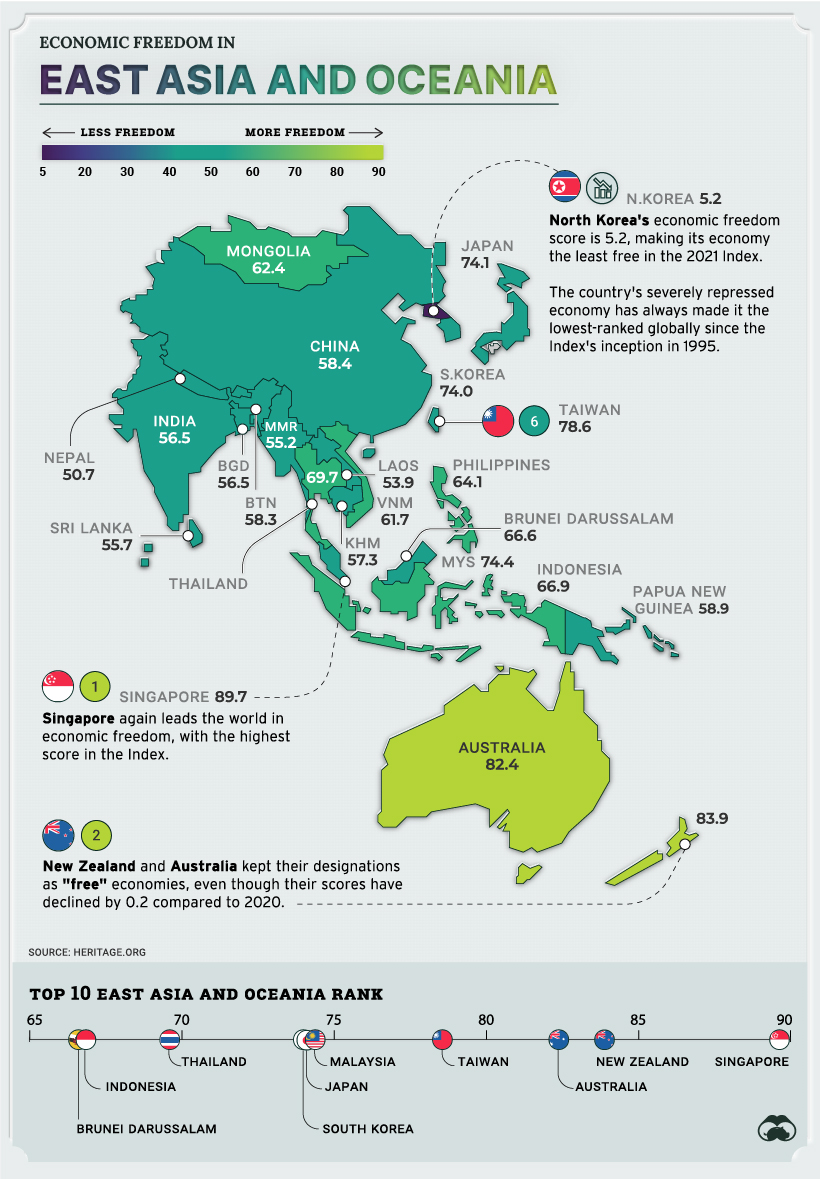 Finally, it’s worth noting that Australia and New Zealand are regional leaders, and are two of only five nations that are currently in the “free” category of the index.

WP Briefing: Episode 22: A Carol of Thanks