Is Your Usage Of Google Ads An Organic Search Ranking Factor? via @sejournal, @mirandalmwrites
Advertisement

Google’s Advice For Targeting Multiple Locations With One Website via @sejournal, @MattGSouthern

How To Add Internal And External Links That Get Clicks And Conversions via @sejournal, @JRiddall

Google: Nofollow Is Not A Substitute For Noindex via @sejournal, @MattGSouthern

Does Google Use Analytics and Chrome Data for Ranking? via @sejournal, @martinibuster

Are Nofollow Links A Google Ranking Factor? via @sejournal, @annaleacrowe


Does Google favor advertisers by giving those who use paid ads a ranking advantage in organic search results?

It’s a topic that’s been hotly debated over the years.

Let’s take a look at why people have believed this to be true – and whether Google Ads can really help you rank higher in organic search.

The Claim: Google Ads As A Ranking Factor

This one stems from an ongoing distrust of Google the Mega Corporation. It suggests that if you spend money in one division (in this case, Google Ads), you’ll enjoy benefits in another (Search).

The Evidence for Google Ads As A Ranking Factor

Every so often, an SEO professional pops up to share anecdotal evidence around rankings dropping in correlation with a Google Ads campaign (see an example in the next section).

But that’s just what it is – there’s no evidence of causation there, and the plural of anecdote is not data.

Early in 2021, a member of the search marketing community fired off a series of tweets accusing Google of not only using Ads campaign spend to influence organic search rankings but of attempting to extort business owners with the practice.

In one, she wrote:

“I’m not sure yet how to process the fact that Google just did a shakedown of one of our clients. In essence, they were told to spend more on paid ads in order to improve organic search *for their brand name.*”

As expected, chaos ensued. Those who’d harbored a belief in the Google Ads/organic rankings cheered in vindication. SEO pros shook their proverbial fists at the Twitter sky.

Others argued that it wasn’t possible; that the intent of the sales rep’s message had been lost in translation.

Upon questioning, she insisted it was not a miscommunication and that the Google Ads sales rep had even sent written confirmation that increasing ad spend would improve branded organic rankings.

Was Google caught out with a smoking gun, accepting money in exchange for rankings?

The Evidence Against Google Ads As A Ranking Factor

Google’s Danny Sullivan caught wind of the conversation above and was clear in denying any connection between the two: 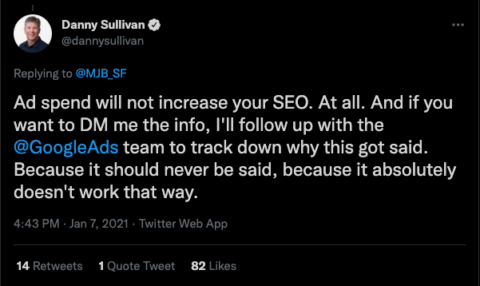 This isn’t surprising, as Google has long held that there’s no connection between advertising and organic search.

Matt Cutts dispelled this myth in a 2014 video, characterizing the ongoing insistence that Google Ads (AdWords, at the time) were in any way related to organic search performance as the stuff of conspiracy theories:

And we sort of feel like we should get those two conspiracy camps together and let them fight it all out. And then whoever emerges from that one room, we can just debunk that one conspiracy theory.”

Another conspiracy theory, he said, was that Google makes algorithm changes to try to make people buy ads.

“We want to return really good search results to users so they’re happy, so they’ll keep coming back. That’s basically it.”

A viewer said they noticed a rankings drop on a specific keyword when they started running Google Ads, and their rankings returned when they stopped advertising.

…So the ranking change that you saw there seems like something that would be totally unrelated to the ads.”

Google Ads As A Ranking Factor: Our Verdict 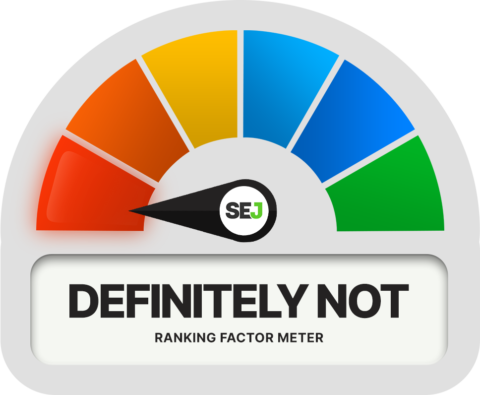 Google is a massive organization more than capable of keeping these two divisions separate.

What’s more, allowing ad spend to influence organic rankings would surely result in less useful results and a poorer user experience. It would counteract everything else Google is trying to do with search.

You may not believe everything Google says.

But in this case, I believe we would have seen a good deal more concrete evidence over the last 20+ years if you could simply buy your way to the top of organic search rankings through ads.

This one is clear: Google does not use Google Ads as a search ranking signal.

So while buying an ad isn’t an organic search ranking factor, Google’s ads absolutely can impact the visibility and placement of your site on the SERPs.