How Powerful is Your Passport in a Post-Pandemic World?
Advertisement

One Year In: Air Travel Plummeted During the COVID-19 Pandemic

How Powerful is Your Passport in a Post-Pandemic World?

With COVID-19 cases falling in many parts of the world and vaccination programs ramping up at warp speed, international travel no longer seems like a distant dream.

The Henley Passport Index, which has been regularly monitoring the world’s most travel-friendly passports since 2006, has released its latest rankings and analysis.

The most recent data provides insight into what travel freedom will look like in a post-pandemic world as countries selectively begin to open their borders to international visitors.

The rankings are based on the visa-free score of a particular country. A visa-free score refers to the number of countries that a passport holder can visit without a visa, with a visa on arrival, or by obtaining an electronic travel authorization (ETA).

Without considering the constantly changing COVID-19 restrictions, Japan firmly holds its position as the country with the strongest passport for the 4th year in a row.

This positioning is based on exclusive data from the International Air Transport Association (IATA)—with Japanese passport holders theoretically able to access a record 193 destinations from around the world visa-free.

The last time Japan didn’t hold the number one position was back in 2017, when it shared the 5th spot with countries like the United States, New Zealand, and Switzerland.

Singapore remains in 2nd place, with a visa-free score of 192, while Germany and South Korea again share joint-3rd place, each with access to 191 destinations.

Throughout the 16-year history of the Henley Index, EU countries have maintained a dominant position in the passport strength reports. Finland, Italy, Luxembourg and Spain all hold the 4th position while Austria and Denmark round up the top 5 with a visa-free score of 189.

The United States and the United Kingdom jointly share the 7th position with a visa-free score of 187 destinations. Canada, Mexico and Brazil hold the 9th, 23rd and 17th positions respectively, with Brazil experiencing a significant jump of eight places over the last 10 years.

Editor’s note: Visit the Henley Passport Index site for a full list and ranking of all countries around the world.

The Countries With The Least Travel Freedom

Afghanistan continues to be the country with the least amount of travel freedom, coming in last place (110th rank) with a visa-free score of 26 destinations. Iraq, Syria, Pakistan and Yemen have access to slightly more visa-free travel, but still linger at the bottom of the overall ranking.

The latest report indicates that the gap in travel freedom is now at its largest since the index began in 2006. Japanese passport holders can access 167 more destinations than citizens of Afghanistan, who can visit only 26.

The Biggest Gainers In a Decade

Over time, small annual moves in the Henley Passport Index can make a big impact—and in the last decade, countries like China and the UAE have been the biggest movers: 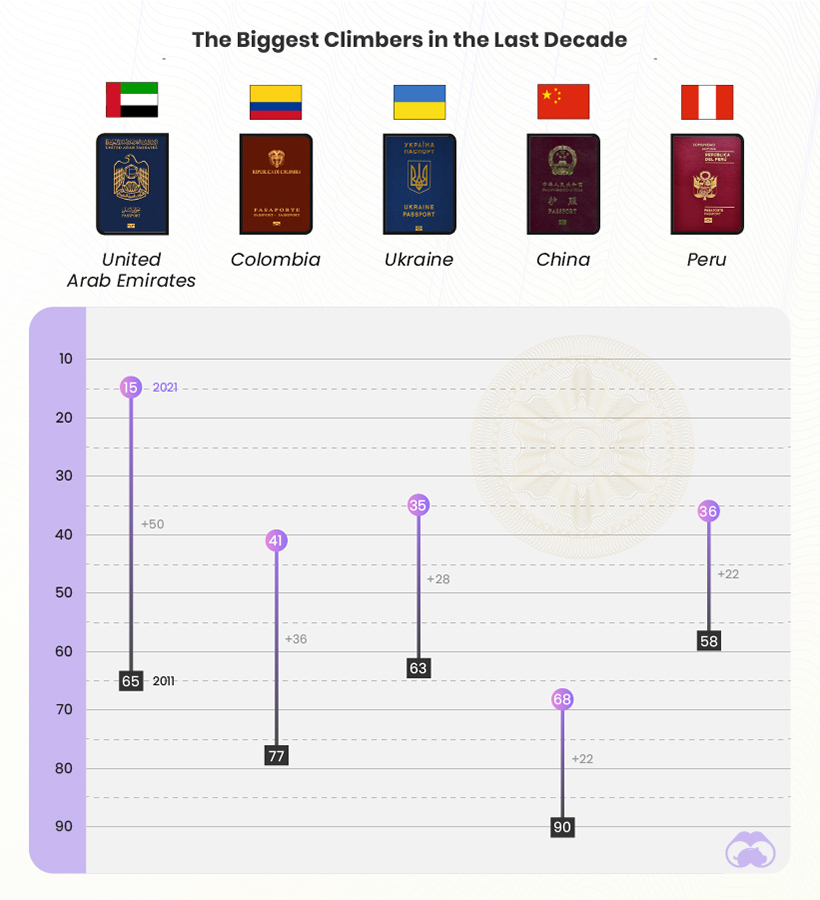 China has risen by 22 places in the ranking since 2011 by going from a visa-free/visa-on-arrival score of 40 destinations to now 77.

The post How Powerful is Your Passport in a Post-Pandemic World? appeared first on Visual Capitalist.