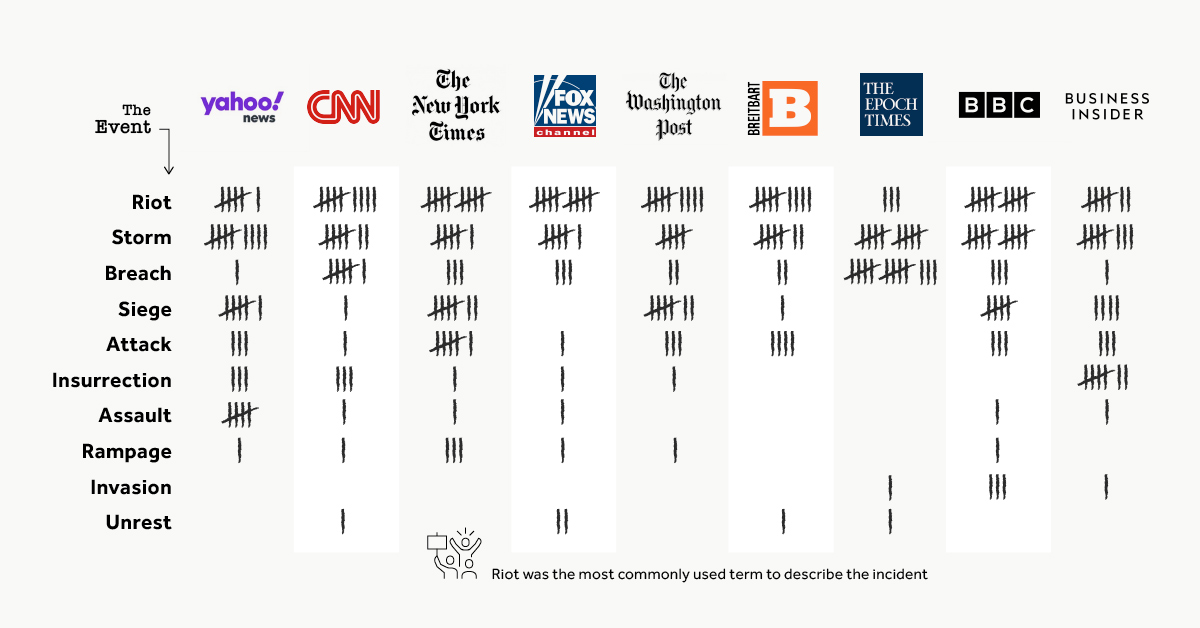 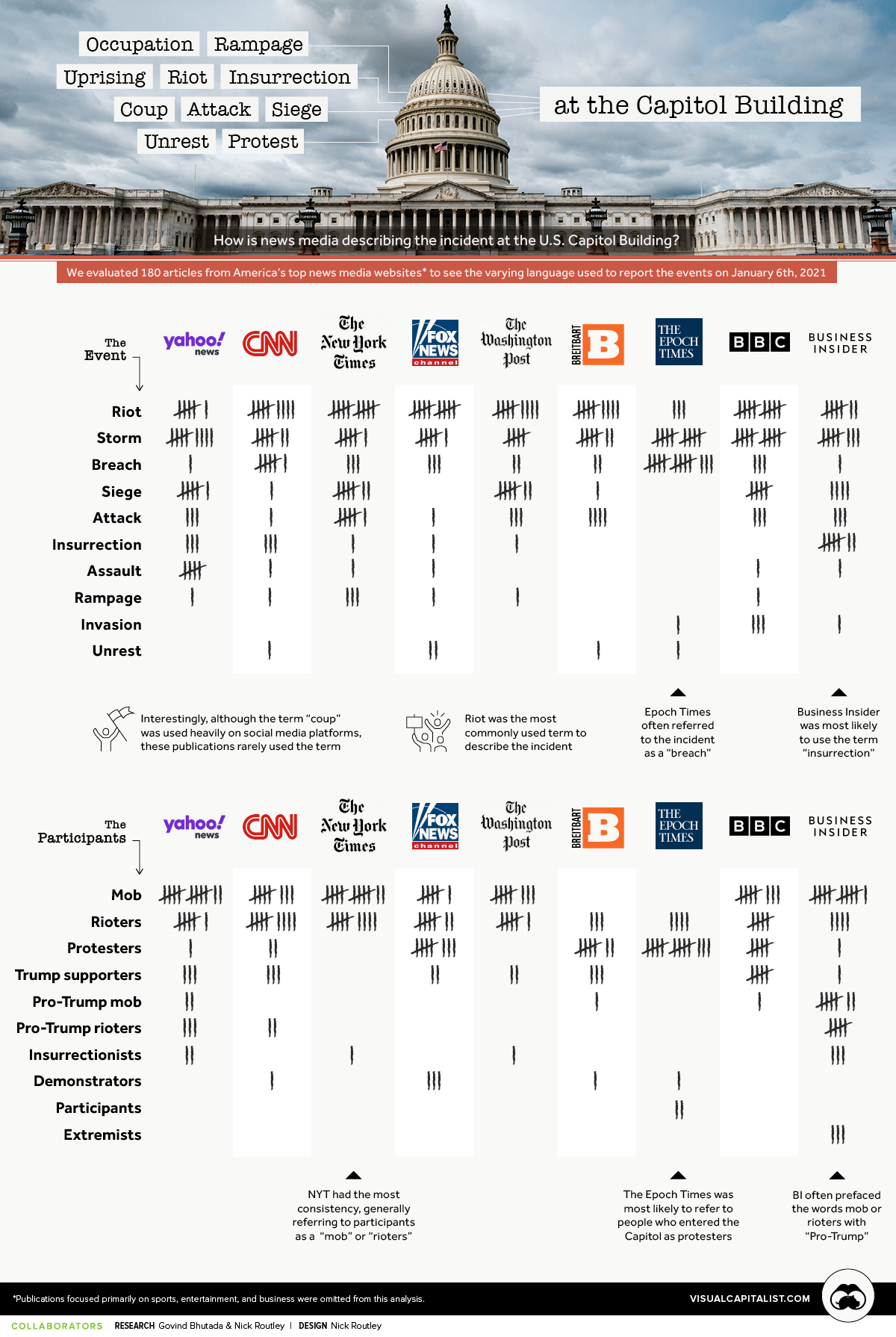 How Media Outlets Describe the Incident at the U.S. Capitol

Was it a riot? An insurrection? Or was it simply a protest?

The January 6, 2021 incident at the U.S. Capitol was widely covered in news media—however, the type of language used to describe it varied greatly from publication to publication.

Popular news media has a major impact on how society at large perceives major events. To learn more about the language used in recent coverage, we analyzed over 180 articles from Alexa’s top-ranked news websites in the United States. Here’s what we found.

Most Common Descriptions: The Event

From riot to rampage, descriptions used by news media of the incident at the U.S. Capitol were all over the map:

The most commonly used description was riot, followed by storm. On the other end of the spectrum were the less-frequent terms such as insurrection, assault, rampage, and invasion.

Interestingly, Yahoo News, Business Insider, and BBC used siege, attack, and insurrection more often as compared to Breitbart, Epoch Times, and Fox News. The Epoch Times also described the event as a breach more times than any other outlet.

Most Common Descriptions: The Participants

The participants in the incident were identified in various ways, reflecting the variation seen in describing the incident.

In alignment with the usage of riot, the most common descriptions for participants were mob and rioters, followed by protesters. The frequency of use of Trump supporters comes as no surprise, especially since many of the participants are known to have attended the ‘Stop the Steal’ Trump rally preceding the event.

While most outlets referred to the crowd as protesters in the events leading up to the storming of the Capitol building, not all used that term to describe the people who entered the Capitol building. Fox News, Breitbart, and Epoch Times used protesters more often than any other news media outlet. In fact, these three outlets account for 28 of the 37 news articles in which the term protesters appeared.

On the other hand, the term pro-Trump rioters—which was used by Yahoo News, Business Insider, and CNN—did not appear in any articles by Fox News, Breitbart, or Epoch Times.

While some media outlets stuck to relatively neutral descriptors, others used unconventional terms to describe both the incident as well as those involved.

The New York Times and the Washington Post, for example, generally adhered to neutral language. They frequently described the event as a siege and a riot, and those involved as the mob and rioters.

The Epoch Times and Breitbart employed terms like protesters and alleged Trump supporters in discussing the individuals involved.

On the other hand, Yahoo News called it an insurrection carried out by militant supporters of President Trump, and Business Insider talked of a pro-Trump assault on the U.S. Capitol.

The British Broadcasting Company (BBC) potentially reflects how the event was perceived outside of the United States. Terms like riot and stormed appeared most commonly in BBC coverage of the incident. The participants were evenly identified as rioters, Trump supporters, protesters, and more often as the mob.

The Impact of Media Coverage

The influence of news media on how the public perceives events is undeniable. In fact, 88% of surveyed Americans consider the news an essential tool to keep informed about public affairs.

From a riot caused by rioters to an insurrection by President Trump’s militant supporters, the way different media outlets analyze the U.S. Capitol incident impacts what their respective audiences take away from it.

Note: Publications that focus primarily on sports, entertainment, and business were omitted from this analysis. We analyzed 20 articles from each publication that related directly to the Capitol situation and resulting coverage.

The post How News Media is Describing the Incident at the U.S. Capitol appeared first on Visual Capitalist.

Our team is here to build a beautiful website that works for you! Get in touch with us today….