How Much Does it Cost to Host the Olympics?
Advertisement 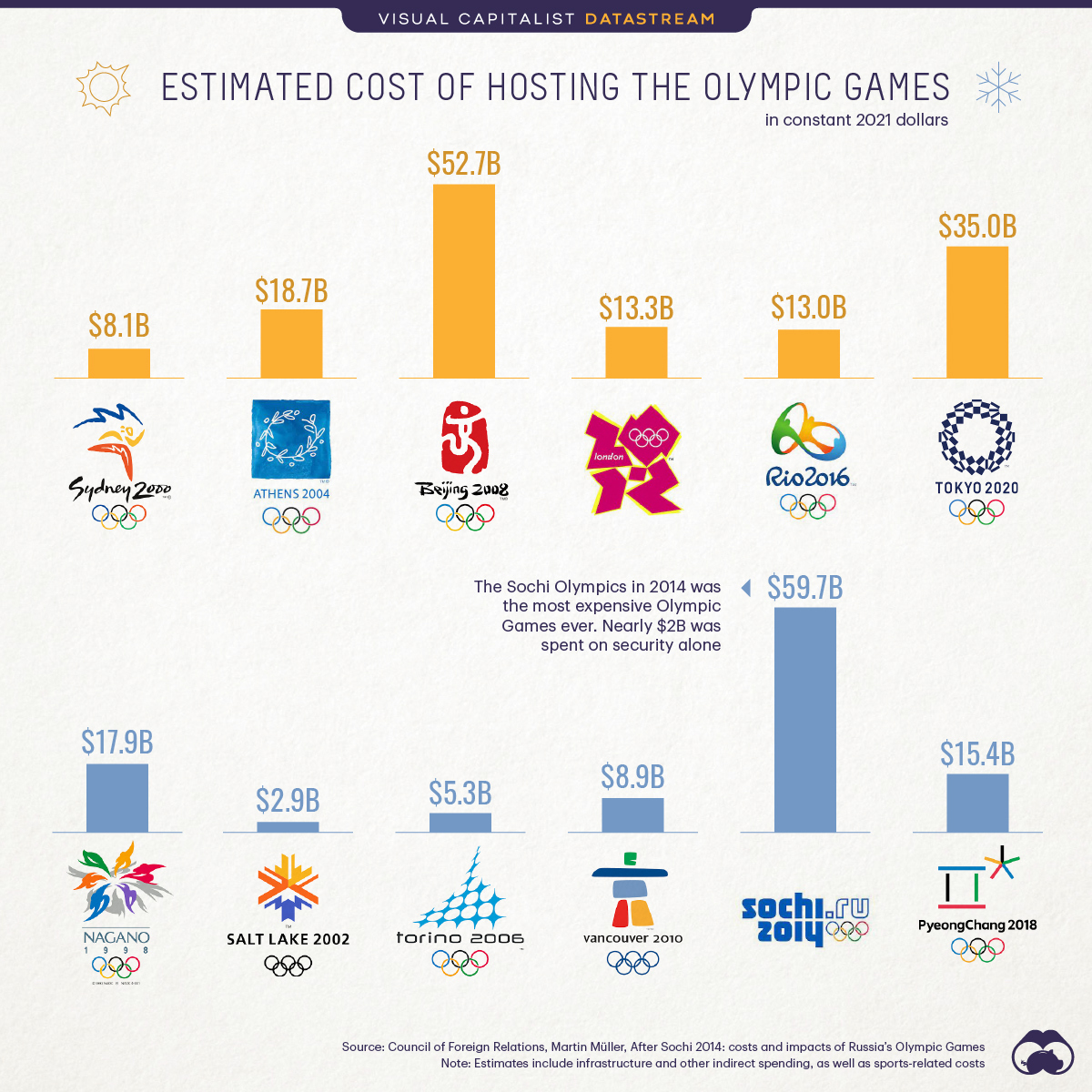 How Much Does it Cost to Host the Olympics?

The scope of the Olympics has scaled up drastically.

Over a century ago, the first modern games had approximately 280 athletes competing from 12 different countries—these days, more than 10,000 athletes from 200+ countries participate in this prestigious athletic event.

As the games have increased in scope and size, so too has the cost of putting them on.

How much does it cost to host the Olympic games? Over the years, the final price tag has varied greatly from city to city. Here’s a look at the estimated cost of hosting the games (both summer and winter) since 1998.

Estimated Cost of Hosting the Olympics, by City

A major expense for a host city is building out infrastructure to support the tourism and traffic generated by the games.

For instance, when Sochi hosted the Winter Olympics in 2014, the city spent roughly $50.7 billion on non-sports-related infrastructure—approximately 85% of its total budget.

Of course, the hope is that non-sports-related infrastructure will benefit the host city long-term, which is how countries rationalize the cost.

But sports-related facilities also cost a fortune to build, and are often not utilized once the games are over. For instance, Beijing’s national stadium cost $460 million to build initially, with millions needed to maintain it each year. The facility has barely been used in the years following the 2008 games.

That said, it is worth noting that Beijing plans on using the national stadium for the Opening and Closing ceremonies when they host the 2022 Winter Olympics.

Source: Robert Baade and Victor Matheson, “Going for the Gold: The Economics of the Olympics”; Andrew Zimbalist, Circus Maximus; Marketplace; U.S. Bureau of Labor Statistics via Council on Foreign Relations
Details: Estimated costs have been adjusted to account for inflation. Estimates include infrastructure costs, as well as other indirect spending and sports-related expenses.

The post How Much Does it Cost to Host the Olympics? appeared first on Visual Capitalist.