How Big is the Global Mobile Gaming Industry?
Advertisement

The Accelerating Frequency of Extreme Weather

Who are the Longest Serving Active CEOs in the S&P 500?

The Decline of Long-Term Investing

The Decline of U.S. Car Production

After China’s Crypto Ban, Who Leads in Bitcoin Mining? 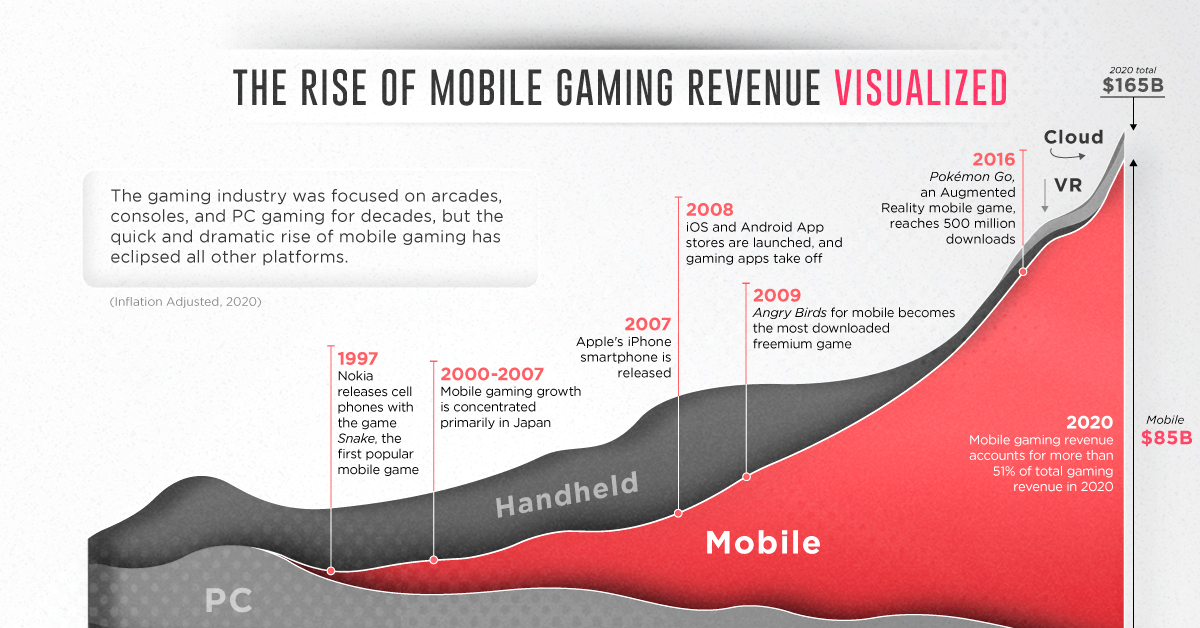 While the gaming market spotlight is focused on new consoles and games this holiday season, the bigger focus for insiders continues to be the mobile sector.

Over the last 20 years, mobile gaming has gone from the industry’s entertaining afterthought to its largest source of revenue—in 2020, the sector is estimated to have generated around $85 billion.

In light of COVID-19 keeping many consumers at home, gaming companies like Electronic Arts and Activision Blizzard have reported higher year-over-year revenues and greater market penetration than ever before.

The massive industry growth hasn’t gone unnoticed by companies outside of the gaming sector. In fact, it has emboldened many to make billion-dollar entries into the gaming market that failed to pan out in the early 2000s.

In the bid to capture the cloud-service sphere and become the “Netflix” of gaming, major services have been launched by Microsoft, Sony, Nokia, Amazon, and Google.

At the same time, publishers have been racing to consolidate gaming franchises on the path towards building massive recurring revenue streams.

With Sony and Microsoft’s new consoles fresh to market (and constantly sold out), next generation games hitting multiple platforms, and cloud services kicking off in earnest, traditional gaming sectors might finally start catching up to mobile.

But as the global proliferation of smartphones continues to grow, it will be an uphill challenge. With 2.7 billion estimated gamers already and growing, how much higher can the mobile gaming wave rise?

State of the Word 2020 Scheduled for December 17, with Virtual Q&A

The Ultimate List of Essential Plugins for WordPress Multisite Networks