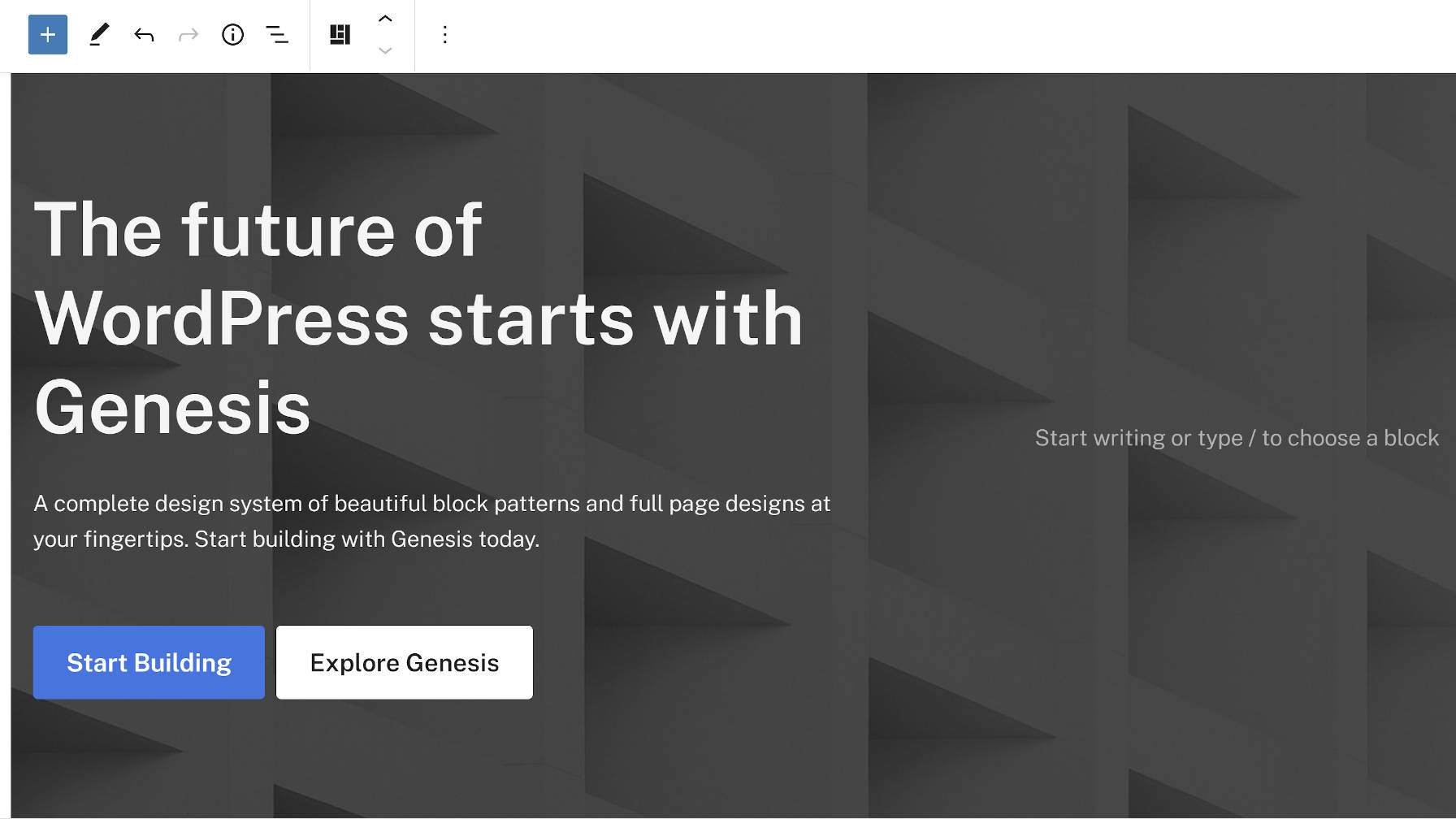 On November 11, StudioPress announced an open beta for its Genesis Block Theme. This is a pivotal moment, or at least one moment in a series of significant moments, for adoption of the block editor. Feel free to call me on this in a year or two if it does not pan out.

The original Genesis theme is the foundational tool that 1,000s of developers use to build many 1,000s more websites across the web. Over the past decade, StudioPress has remained one of the top-tier commercial WordPress theme companies, and it has done so on the back of its Genesis product. It has also remained an important part of the company’s offering since WP Engine acquired it in 2018.

While WP Engine and StudioPress have bet big on the block editor with products like Genesis Blocks, the Genesis Block Theme will be a game-changer when it launches as a finished product, likely sometime next year.

This is not necessarily because StudioPress will offer a better product than what many others are creating. It is about one of the largest theme development companies shifting toward a block-first approach. Others will fall in line. Or be left behind.

WP Engine and StudioPress have done this slowly and strategically, thoughtfully transitioning their user base into the block world. With WP Engine’s acquisition of Atomic Blocks (now Genesis Blocks) and bringing on the Block Lab team earlier this year, the company is setting itself up to continue pushing what developers and users can do with WordPress’s block system. The Genesis Block Theme is the next step in what I am assuming is a long list of product ideas the company is pursuing.

Typical Genesis-based child themes, at least those directly sold by the StudioPress team, have always catered to those who prefer a more minimalist-get-out-of-the-user’s-way approach to design. Many of them should make an easy transition to the block editor. Add a few style adjustments here, make a few tweaks there, and, you have a theme that is fully capable of handling the block editor. It is a testament to the company’s design chops when it does not really matter what WordPress is doing under the hood. The theme designs hold up regardless.

Times are changing, however. The StudioPress team is looking at WordPress 5.7, which is expected to land in the spring of 2021, and getting ready to handle the launch of the WordPress site editor.

David Vogelpohl, the VP of Web Strategy for WP Engine, left specific instructions on how to test the Genesis Block Theme beta in the announcement. One of the key items in that list is to skip modifying the theme directly or using the customizer settings. The goal is to identify pain points when approaching site design via blocks. It is good to start shifting how the Genesis user base approaches building sites in general.

He also asks testers to install the Genesis Blocks plugin. It is a library of various blocks, sections, and layouts for building block-based content. This will help both developers and users become more accustomed to the shift in building with the company’s key product.

Vogelpohl teased a “Genesis X” project in May that would focus on pushing the boundaries of the block editor and, eventually, full-site editing. Deciding against launching a separate product, the team has been pushing features from this project into Genesis Blocks. Three weeks ago, StudioPress launched its new Collections feature, which was born from Genesis X.

“You can think of Collections like a theme’s block-based demo content, but available on-demand as you build out content vs. only during one-click-theme-setup features within the framework today,” said Vogelpohl.

Collections are essentially categorized page sections or entire layouts that share a similar design aesthetic. Genesis Blocks currently has one Collection titled Slate available for free. In practice, a user can already build out nearly an entire site with just this single Collection. This seems to be the direction that Genesis and its line of products are heading. Everything is pretty much plug-and-play. Select a few layouts for various pages. Click a few buttons. Customize the content. And, voilà — a turnkey system for building websites.

StudioPress must wait for the site editor to land in WordPress 5.7 before it can handle everything. Site headers, footers, and sidebars still require customization outside of the block editor.

Right now, the Genesis Block Theme beta is nothing out of the ordinary. It is essentially a base theme that allows the accompanying Genesis Blocks plugin to shine. It will also allow the development team to test ideas based on user feedback in the coming weeks and months. Vogelpohl said they will eventually tackle full-site editing based on what they learn from the beta run’s feedback.

How To Make The Perfect WooCommerce Checkout Page (Get Results)

What is SEO? A Beginner’s Guide