Facebook iOS 14 Update Aftermath: 4 Issues & What To Do About Them via @sejournal, @closedloop
Advertisement

Facebook Has New Ways to Generate Leads & Connect With Customers via @sejournal, @MattGSouthern

12 Facebook Ads Features Every Marketer Should Know via @sejournal, @afhammer


The new pro-consumer privacy measures Apple implemented with the launch of iOS 14 brought major changes to the digital marketing world.

And since the announcement, no company has been more vocal about the potential implications to its platform than Facebook.

In fact, for many, it wasn’t a big leap to think the update was the beginning of the end of the world – tracking-wise.

But after months of preparing clients with training, documentation, decks, POVs, and webinars, the moment came.

In this column, you’ll learn about these challenges and what you can do about each one:

First, let’s take a look at what advertisers are experiencing as a result of Facebook’s iOS 14 update.

Opting In vs. Opting Out

The main issue surrounding iOS 14 was the use of Apple’s Identifier for Advertisers (IDFA), Apple’s cookie that allows tracking on iOS devices.

Until implementation, Apple device owners were automatically opted-in for tracking but had the option to opt-out.

Now, following the update to iOS 14.5, iOS users are prompted and asked if they would like to be opted into being tracked, with the default now being opt-out.

According to mobile analytics company Flurry, when iOS 14.5 prompts began, an estimated 2% of users opted-in to tracking. That number has steadily increased since the end of April but even now only sits at an estimated 10%.

Depending on your perspective, iOS 14 is a win for consumer privacy. But there’s no question it’s a big, fat loss for digital marketers.

Facebook, in particular, is a mobile-centric advertising platform. Now that they’ve lost the ability to track a large segment of their mobile traffic reliably, there will be implications.

To mitigate the impact iOS 14 has on tracking, Facebook implemented new measures. The latest updates resulted in unpleasant limitations for advertisers on the platform, including:

What We’ve Seen So Far

Now that we’ve been living in this brave new era of reduced mobile tracking ability on Facebook for the past few weeks, let’s take a moment to examine the impact.

Was this truly the apocalyptic event many had feared? Or was it something more akin to a Y2K-level false alarm?

The answer is, as is generally the case, somewhere in the middle. There have been some appreciable impacts on campaigns, especially if your campaigns heavily depend on pixel-based conversions.

But has iOS 14 made Facebook a less viable channel for demand generation marketing?

Nevertheless, here are a few common threads across the campaigns I help manage on the agency side and, perhaps more importantly, steps you can take to minimize their impact.

1. Pixel-Based Conversion Reporting Is Off… Way Off

Between fewer tracked mobile conversions, delays in reporting, and a healthy dose of “statistical modeling” on behalf of Facebook, it’s no surprise the numbers you may be seeing in Ads Manager aren’t necessarily reflective of reality.

Take one of our clients, for example: A B2B tech company driving leads using a landing page on their website.

With view-through attribution and a few dropped UTMs, before iOS 14 was implemented, reported Salesforce leads were generally around 10-12% less than the reported Facebook leads.

After iOS 14 was implemented at the end of April, the pendulum swung in the opposite direction, and Facebook began drastically under-reporting the number of leads.

Though the ratio variance is inconsistent, it seems to be growing. 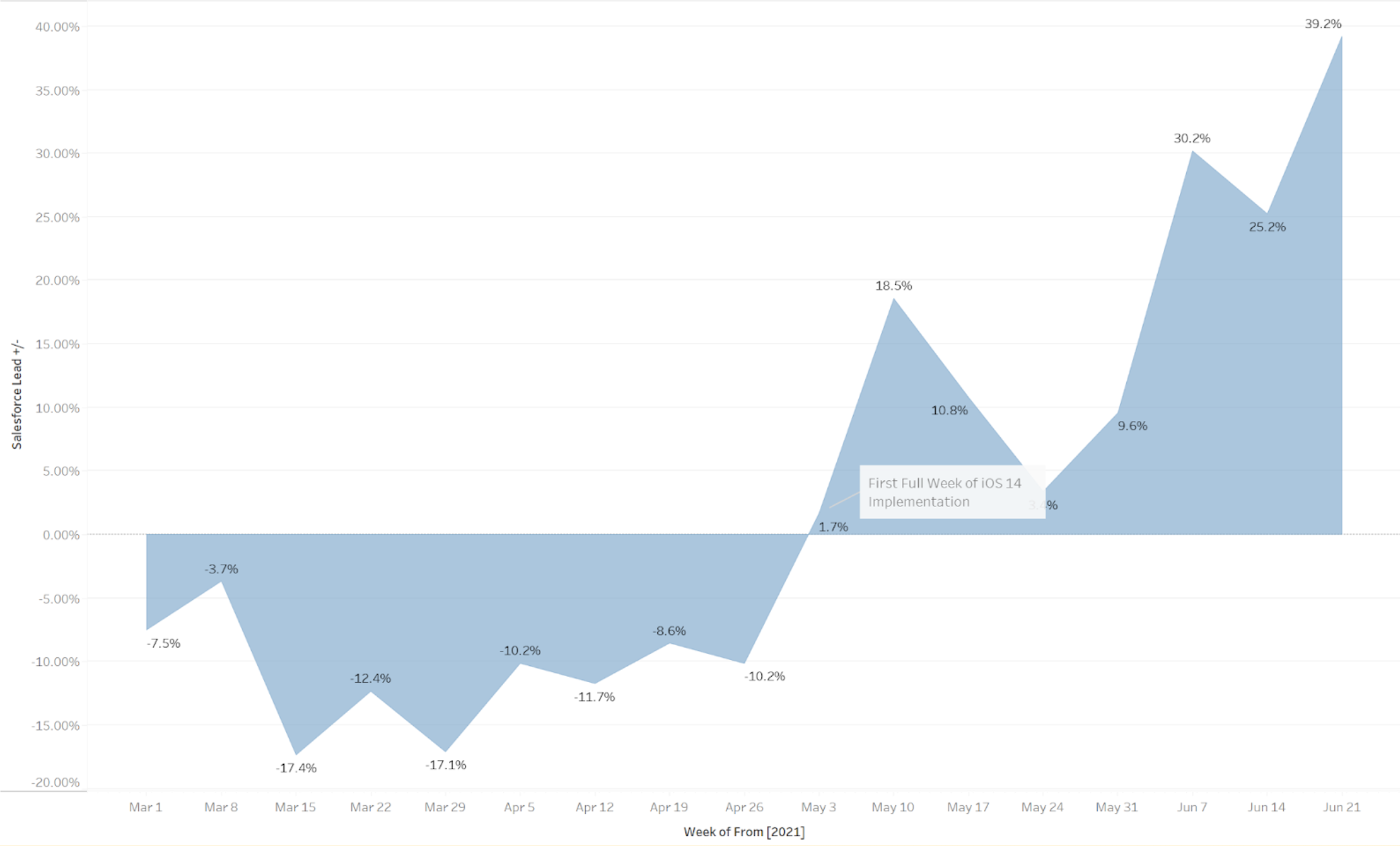 Perhaps one of the biggest and most frustrating impacts we’re noticing post-implementation is the lackluster performance of evergreen campaigns. Sure, a degree of performance falloff is expected as complex algorithms adjust to the new tracking realities.

But after a few weeks of rising CPLs and more data becoming available, we started to see some root causes emerge – unpredictable conversion rates.

What used to be relatively minor week-to-week changes gave way to significant swings. 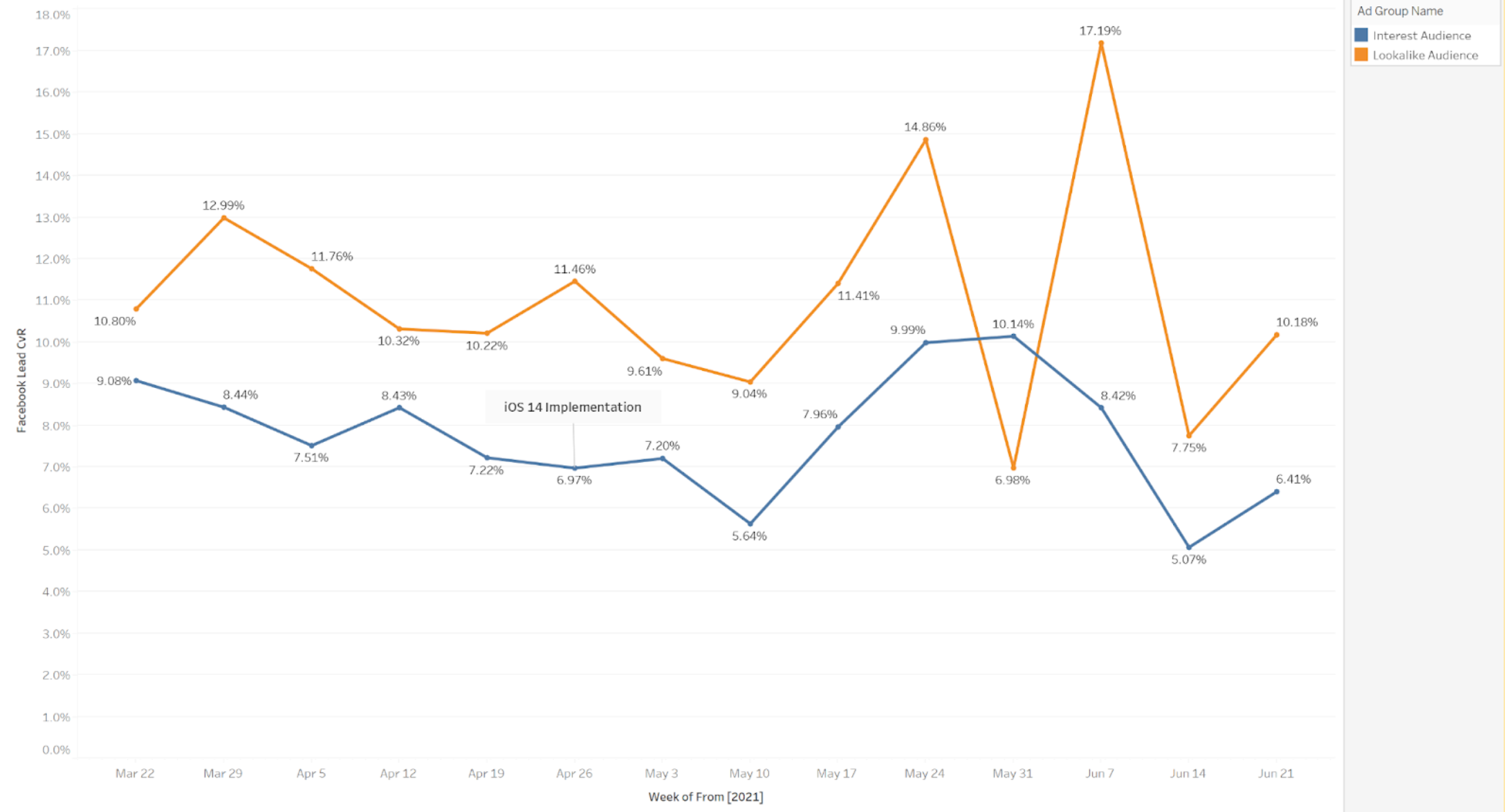 The same was observed across most advertisers using pixel-based conversions to varying degrees of severity.

CBO, or Campaign Budget Optimization, is a tool that allows Facebook to allocate budget among ad sets based on performance dynamically. The better-performing audiences based on your objective tend to get a larger share of your daily budget.

Budgets are set at the campaign level instead of the ad set level.

This once-powerful tool for maximizing efficient distribution of spend is showing its vulnerability in light of the recent tracking changes.

Several client campaigns with CBO enabled showed Facebook allocating a disproportionate amount of spend towards interest-based audiences with much higher CPLs, even when similarly-sized audiences with lower CPLs were available.

This is a curious case, prompting more manual intervention and allocation of spend across various audience segments.

Consider the use of automated rules as a “backstop” to prevent Facebook from overspending on poor-performing ad sets.

4. Retargeting Audiences Are Smaller: No Surprise There

The last impact is merely a confirmation of what we all knew was going to happen. Pixel-based retargeting audiences are smaller and harder to reach.

Since we just lost tracking on a large percentage of mobile traffic, retargeting based on user-visited websites will become a less viable tactic as people age out of the website custom audiences they’re currently in.

Any website custom audiences created during or after the iOS 14 implementation and where that period of time is within the look-back window has undoubtedly seen a reduction in the number of targetable people within those audiences. 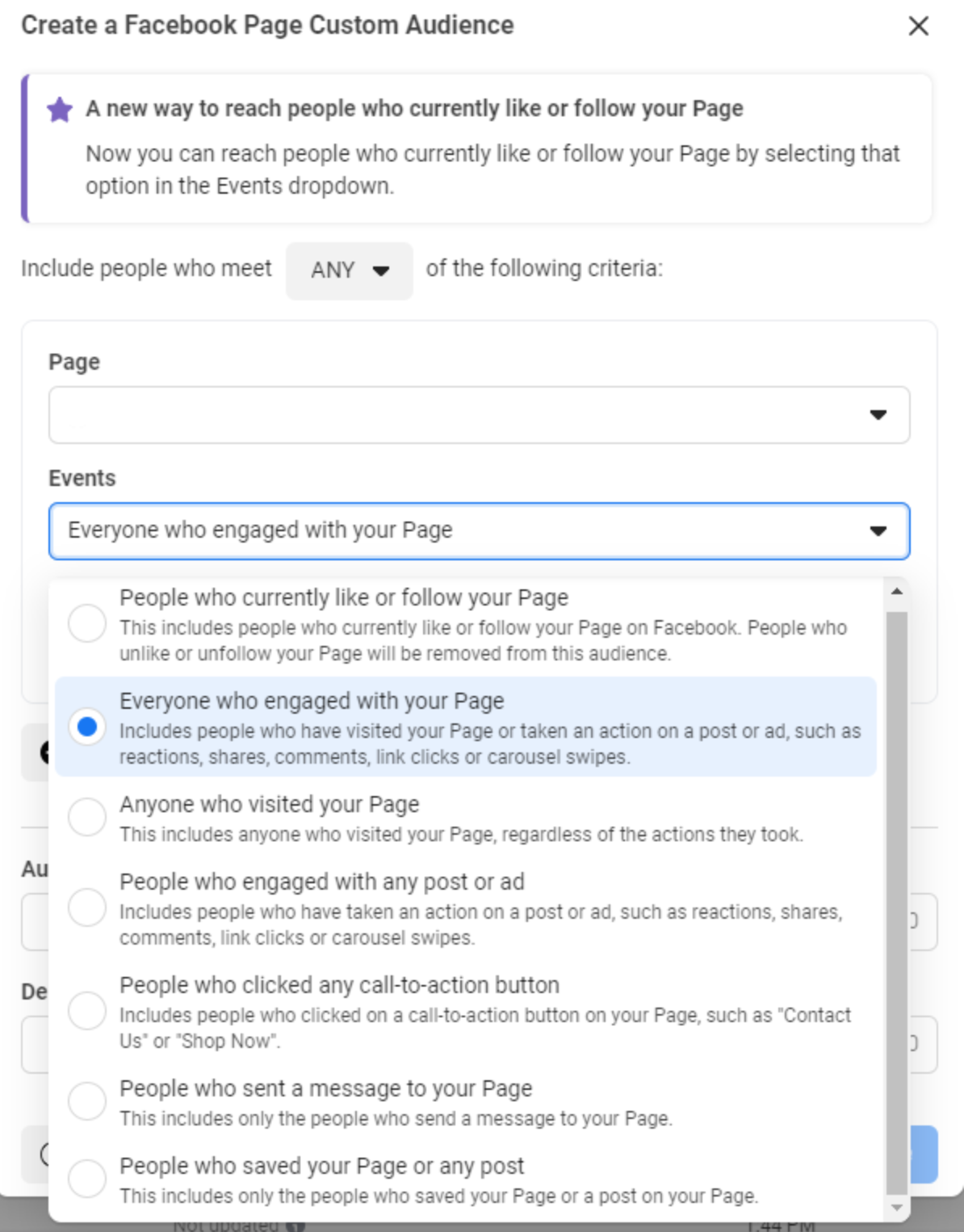 When it comes to iOS 14 and Facebook, it’s safe to say the worst of the storm is over. Marketers also know much more about what to expect as the cookieless future becomes more real.

Tactics evolve, as they always do. And marketers will adapt to the changing landscape.

The Facebook iOS 14 update is the cautionary dress rehearsal for the impending elimination of third-party cookies from browsers like Chrome. At least, we’ll have until 2023 to get ready for that one.