Mapped: Beer Consumption in the U.S.

Which Countries Have the Most Nuclear Weapons?

The Best Selling Vehicles in America, By State

The following content is sponsored by the National Public Utility Council 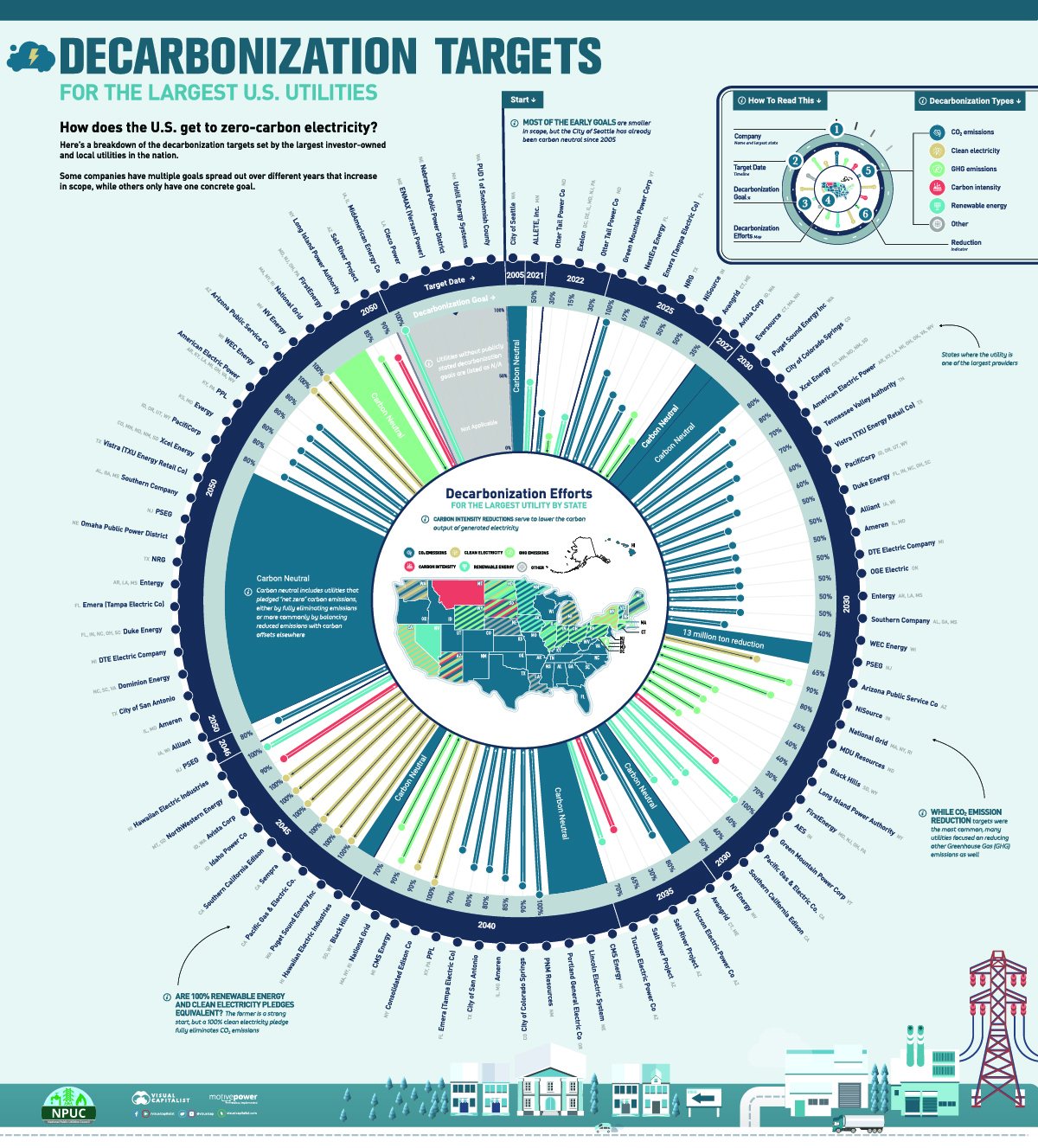 The U.S. recently rejoined the Paris Climate Agreement and decarbonization is back on the minds of government officials and companies alike.

Though every sector plays a major role on the path to net zero carbon emissions, none are as impactful as the energy sector. In 2016, almost three-quarters of global GHG emissions came from energy consumption. With organizations looking to either curb energy consumption or transition to cleaner forms of energy, the pressure is on utilities to decarbonize and offer green alternatives.

How are U.S. utilities responding?

This infographic from the National Public Utility Council highlights the decarbonization targets of the largest investor-owned and public U.S. utilities.

The American energy sector has many players, but the largest utilities account for the bulk of production.

For each state, we looked at the largest investor-owned and public electric utilities by retail sales as tracked by the U.S. Energy Information Administration. Decarbonization targets were taken from each utility’s stated goals or sustainability report.

After narrowing down from 3,328 different entities and subsidiaries, the final list of 60 utilities accounted for 60% of U.S. energy sales in 2019 at just under 1.93 trillion MWh (megawatt hours).

Many companies on the list have multiple goals spread across different timeframes, but they can be grouped into a few distinct categories:

Utilities with decarbonization targets set for 2035 and earlier vary wildly in scope, from completely carbon neutral to minimal reductions.

It’s also important to note that carbon emission reductions are not equal across the board.

Reduction is traditionally based on a base-year measurement (usually 2000 or 2005) that changes for each utility, and a small reduction at a major energy producer can be more impactful than 100% clean energy at a small local utility.

U.S. Utility Decarbonization Targets 2040 and Beyond

From 2040 and beyond, the decarbonization efforts become more ambitious.

In line with many states and the federal government making sweeping clean energy commitments, most of the utility companies with decarbonization targets from 2040 to 2050 are aimed at either carbon neutrality or significant reductions.

For some companies these are their first and only targets, while others are building on smaller goals from earlier years. In the case of the few utility companies marked *N/A, a decarbonization target goal couldn’t be found.

While the targets set above are significant, they are also a long time away from being met. With pressure to decarbonize increasing across the board, utility companies may need to reassess the impact or timeliness of their decarbonization targets.

The National Public Utilities Council is the go-to resource for all things decarbonization in the utilities industry. Learn more.

Etsy SEO: How to Optimize Your Shop & Listings for Search via @sejournal, @krisjonescom