The U.S. Stock Market in 2021: Best and Worst Performing Sectors

Visualizing the Snowball of Government Debt


Over the years, many ideas have emerged from the dorm rooms at Stanford University, but not all of them evolve into billion dollar companies.

Snapchat, however, has beaten the odds. The company’s stock has recently shot up during the COVID-19 pandemic, a bright spot in a decade of highs and lows.

The graphic above is a high level look at Snapchat’s 10-year history, including user growth and financials. Snapchat’s wild ride from start-up to massive success is well documented, so we’ll focus on key elements of story—product design, the Facebook rivalry—and look at how the company is doing today now that the hype surrounding the app has died down.

But first, a quick history…

Snapchat originally began its life as a project called Picaboo in 2011.

Cofounders Evan Spiegel, Bobby Murphy, and Reggie Brown, who were attending Stanford, began building an app that could send photos that disappear after a certain amount of time.

Picaboo was renamed Snapchat in 2012, and by the end of that year, it was clear that the start-up was onto something big. A $13.5 million Series A financing in early 2013 helped fuel the company’s explosive growth.

One of Snapchat’s biggest strengths over the years has been innovative product design. Many of the features we now see baked into every social app originated from Snapchat.

Here’s a quick rundown of Snapchat’s key feature and product development over the past decade. 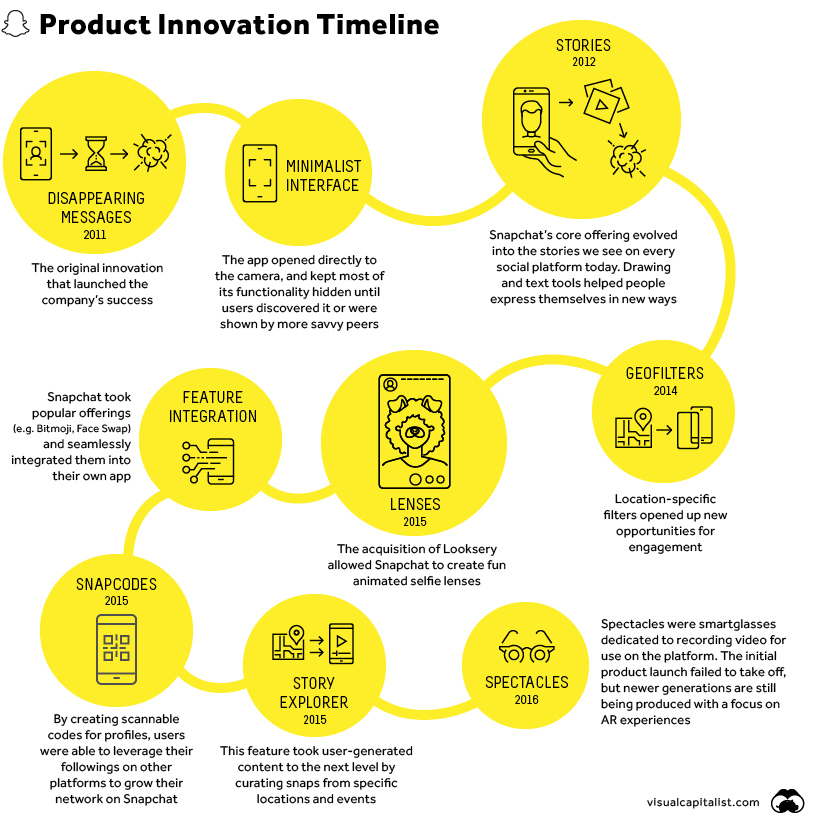 Of all the features listed above, the concept of stories is perhaps the most significant contribution to the digital landscape. Disappearing short-form videos started off as a messaging tool, but ended up transforming the way people share their lives online.

As well, the forward-looking acquisition of Looksery in 2015, helped introduce millions of people to augmented reality (AR). AR continues to be a major growth driver for Snapchat today, as advertisers embrace the Lenses feature.

To Mark Zuckerberg’s credit, he realized the potential of Snapchat early.

When the company was only one year old, the Facebook CEO offered the Snapchat founders $60 million to buy the company. When they rejected the offer, Facebook almost immediately launched an app called Poke which was extremely similar to Snapchat’s offering. You’d be forgiven for not knowing what Poke is, as the app received a tepid reception and was quietly shut down in 2014.

“I hope you enjoy Poke.” – Mark Zuckerberg, in an email to Evan Spiegel

For Snapchat, Poke was a blessing in disguise as it brought even more attention to their growing app. Mark Zuckerberg, however, was not done trying to steal the company’s thunder. After offering $3 billion in cash to purchase Snapchat (the offer was once again rebuffed), Facebook copied a number of features from Snapchat and integrated them into Instagram.

Stories were a massive hit for Instagram, and Snapchat, which could not yet match Instagram’s scale, took a big hit. Growth began to slow noticeably after that Instagram update.

Snapchat hit rock bottom in 2018 after shares dropped below the $5 mark, and user growth had stalled out. As well, underwhelming sales of Snapchat’s Spectacles product garnered negative press and hurt the brand’s “cool factor”.

Today though, the situation looks much different. The app still has a strong market share with the younger demographic, and close to 300 million daily active users. Snapchat was one of the many digital companies to benefit from the COVID-19 pandemic (or, at least, the increase in digital content consumption), and the share price has rocketed to new highs. One other promising indicator is the company’s rising average revenue per user, or ARPU.

Of course, as the last 10 years have shown, success is not guaranteed. TikTok is still a significant competitor with a lot of momentum, and tastes can change quickly in the digital world. That said, there is a positive path forward for Snap Inc.