Comparing the Carbon Footprint of Gold and Bitcoin

The Bitcoin Crash of 2021 Compared to Past Sell-Offs 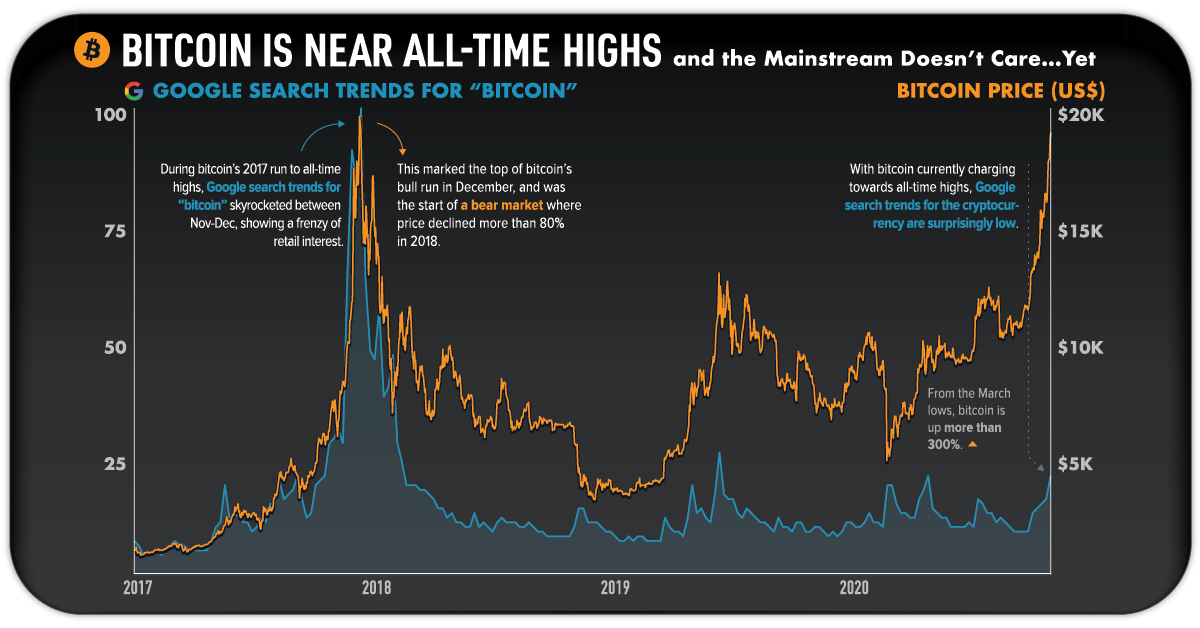 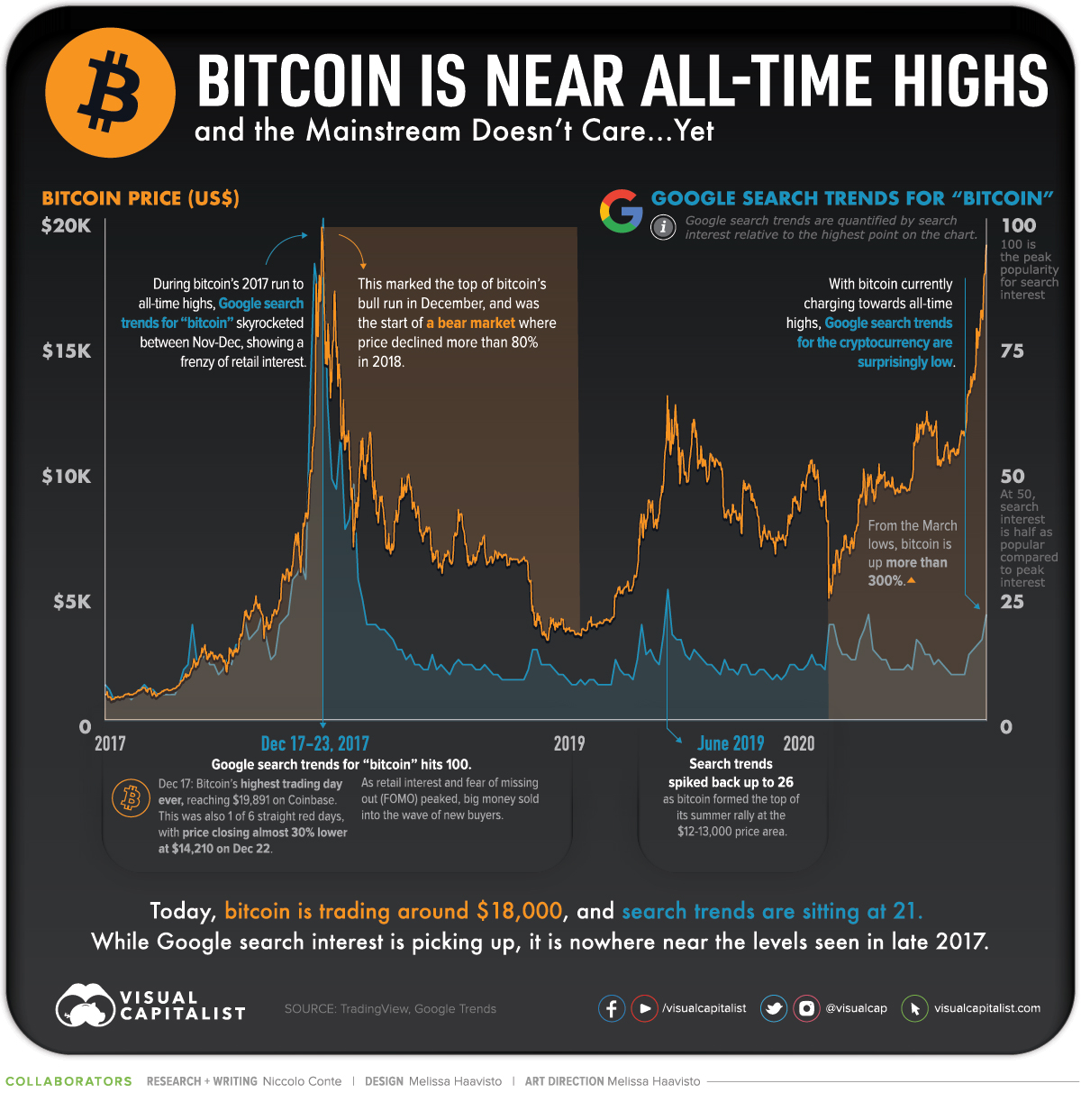 Just about every financial asset saw a huge drop in March, but few have had the spectacular recovery that bitcoin has had since then.

Up more than 300% from the March lows, bitcoin is within $1,000 of its all-time high ($19,891) established three years ago. While 2017’s run-up saw a huge surge in Google searches, interest this time around is less than a quarter of what it was back then.

Bitcoin’s mainstream attention in 2017 was exceptional, and was likely the first time many people had even heard about the digital asset.

After doing all of their Google research back then, it’s possible that the general population is now well aware of the cryptocurrency and doesn’t need to search up the basics again. Add to this that bitcoin is now easily purchasable through popular services like Robinhood and Paypal, and you have fewer people who need Google to figure out the intricacies of bitcoin wallets and transactions.

While people might not be searching for information on bitcoin, the media has certainly picked up on its movement over the past year. Mainstream coverage regarding the cryptocurrency is currently at a relative all-time high for the past 12 months. 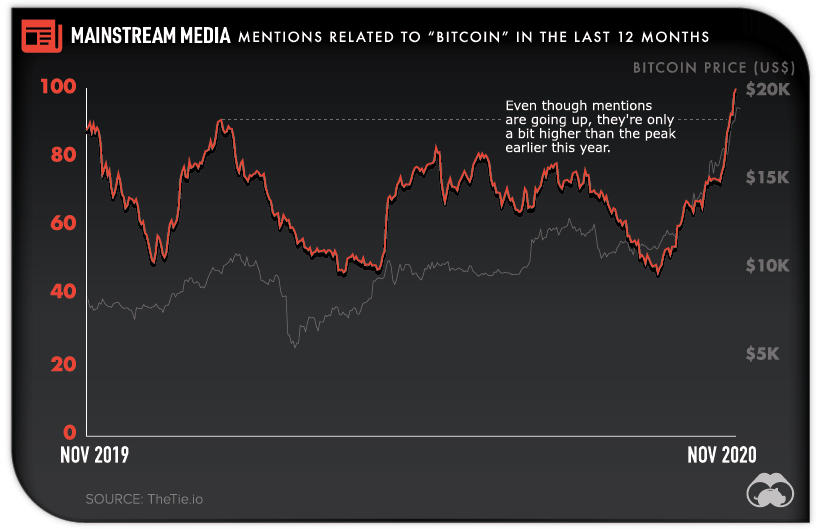 Even if current mainstream coverage isn’t far from previous peaks, it’s still likely that people are seeing an increase in bitcoin content in their news feeds following the recent surge.

This rally is also attracting increased talk on social media sites like Twitter. That said, while there has been a rise in the volume of bitcoin-related tweets in November 2020, numbers are still quite low compared to the amount of tweets in 2017. 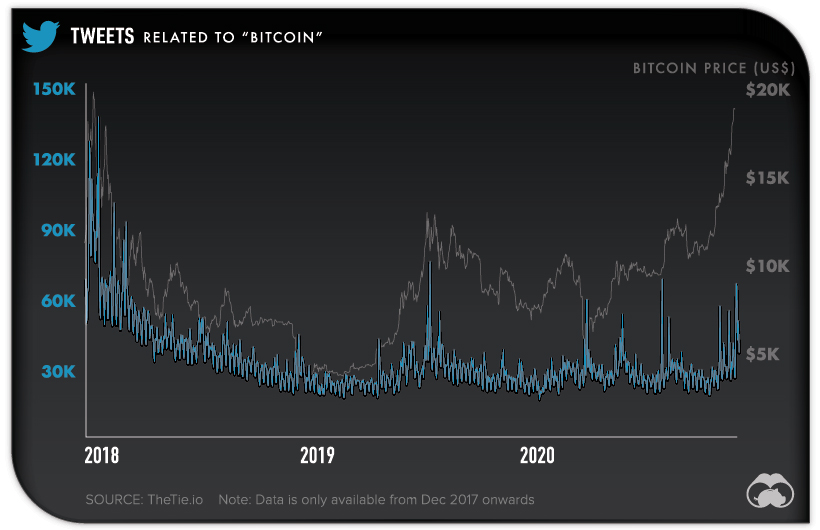 Where in the World is Google Search Interest for Bitcoin?

Even if worldwide search interest isn’t as high as it was in 2017, there is one country where bitcoin is being googled more now: Nigeria.

Since 2015, the Nigerian Naira has lost more than 50% of its value against the U.S. dollar. This, coupled with the country’s high share of unbanked citizens means that alternative currencies and payment methods have steadily risen in popularity and utility. 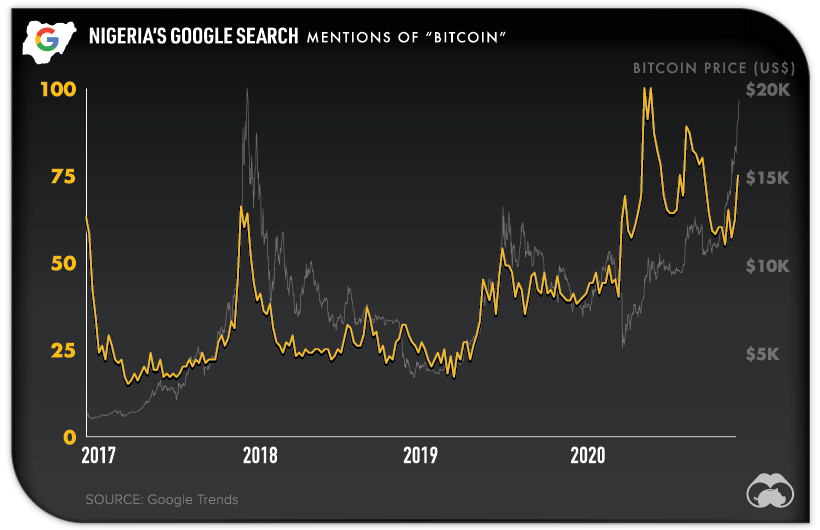 FinTech startups like Chipper Cash are providing Nigeria and other African nations with no-fee P2P payment services, along with the ability to trade bitcoin. The service is also beta testing the buying and selling of fractional shares of popular U.S. stocks.

Started up in 2018, Chipper Cash’s monthly payment values are now over $100 million, and the company has attracted investment from top VC funds like Bezos Expeditions as they provide a valuable service in an emerging market.

If Bitcoin is Mainstream, Where Does It Go From Here?

While bitcoin is proving itself to be a useful medium of exchange around the world, it’s still primarily a speculative asset. As 2020 saw massive increases in money supply across the board, bitcoin reacted best compared to other speculative assets, with its ascent to $19,000 almost completely uninterrupted since the $10,000 price area.

Time will tell if 2017 is set to repeat itself, or if bitcoin is getting ready to set new all-time highs going into 2021.

The post Bitcoin is Near All-Time Highs and the Mainstream Doesn’t Care…Yet appeared first on Visual Capitalist.

WordPress White Screen of Death: What It Is And How to Fix It (In 10 Steps)