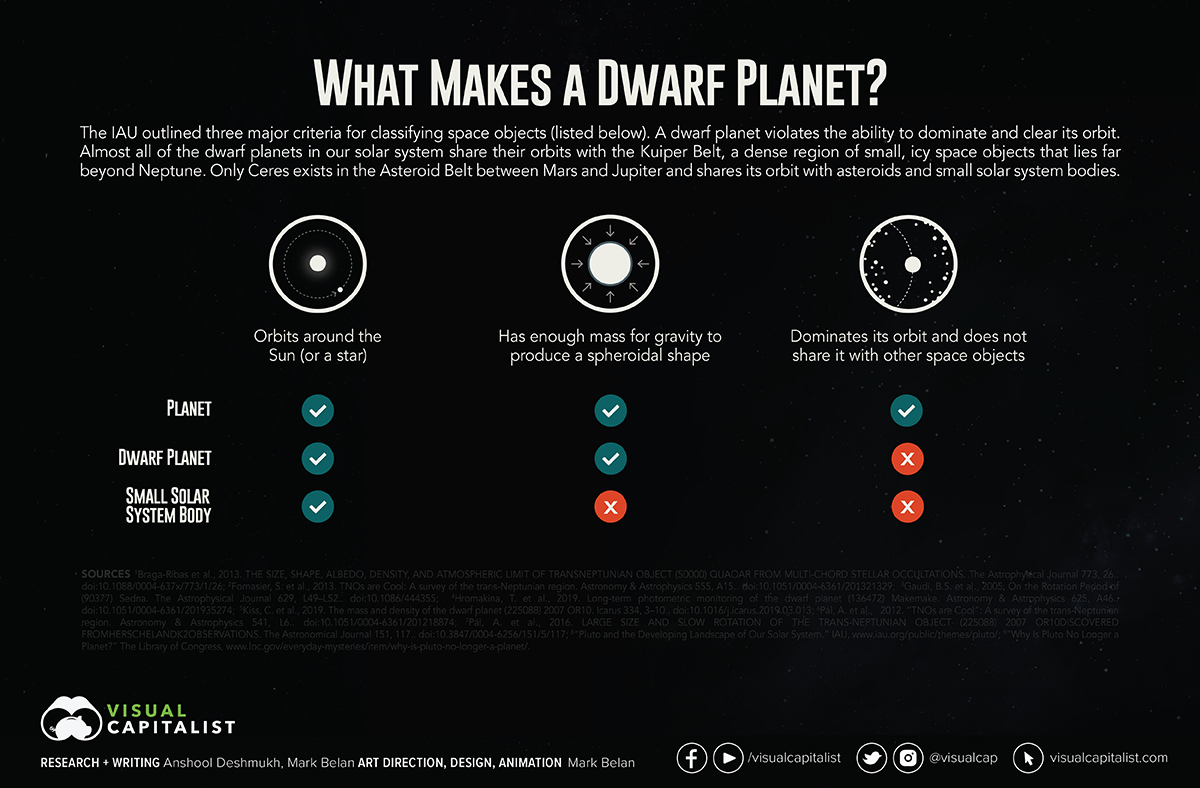 Pluto and the Introduction of Dwarf Planets

Since its discovery in 1930, Pluto has been a bit of a puzzle. It’s smaller than any other planet, even smaller than Earth’s moon. It has an extremely low gravitational pull at only 0.07 times the mass of the objects in its orbit.

Its surface resembles that of terrestrial planets such as Mars, Venus or the Earth, even though its nearest neighbors are the gaseous Jovian planets such as Uranus or Neptune.

Even its orbit is so erratic that it led many scientists to believe that Pluto originated elsewhere in space and the Sun’s gravity pulled it in. Some astronomers once theorized that Pluto used to be one of Neptune’s moons before it became a trans-Neptunian object (objects that exist past Neptune).

These qualities have challenged the scientific view of Pluto’s status as a planet for years. It wasn’t until the discovery of Eris in 2005, one of many increasingly identified trans-Neptunian objects, that the International Astronomical Union (IAU) defined criteria for classifying planets.

With Eris and other trans-Neptunian objects sharing similar characteristics with Pluto, the definition for dwarf planets was created, and Pluto got downgraded to dwarf planet status in 2006.

So what are dwarf planets, how do they differ from “true” planets and what are their characteristics?

The History of Dwarf Planets

A dwarf planet is a celestial body that almost meets the definition of a “true” planet. According to the IAU, which sets definitions for planetary science, a planet must:

Dwarf planets, along with not being moons or satellites, fail to clear the neighborhoods around their orbits. This is the primary reason why Pluto lost its status because it shares part of its orbit with the Kuiper Belt, a dense region of icy space bodies.

Based on this definition, the IAU has recognised five dwarf planets: Pluto, Eris, Makemake, Haumea, and Ceres. There are four more planetary objects*, namely Orcus, Sedna, Gonggong and Quaoar, that the majority of the scientific community recognise as dwarf planets.

Six more could be recognised in the coming years, and as many as 200 or more are hypothesized to exist in the Outer Solar System in a distinct region called the Kuiper Belt.

Ceres is the earliest known and smallest of the current category of dwarf planets. Previously classified as an asteroid in 1801, it was confirmed to be a dwarf planet in 2006. Ceres lies between Mars and Jupiter in the Asteroid Belt, and it is the only dwarf planet that orbits closest to Earth.

Here is a brief introduction to the most recognized dwarf planets:

Here are a few interesting facts about the dwarf planets discovered in our solar system:

Ceres loses 6kg of its mass in steam every second

The Herschel Space Telescope observed plumes of water vapour shooting up from Ceres’ surface; this was the first definitive observation of water vapour in the asteroid belt. This happens when portions of Ceres’ icy surface warm up and turn into steam.

A day on Haumea lasts 3.9 hours

Haumea has a unique appearance due to its rotation, which is so rapid that it compresses the planet into an egg-like shape. Its rotational speed and collisional origin also make Haumea one of the densest dwarf planets discovered to date.

Makemake was named three years after its discovery in 2005

Makemake’s discovery close to Easter influenced both its name and nickname. Before being named after the creator of humanity and god of fertility in the mythos of the Rapa Nui (the native people of Easter Island), Makemake was nicknamed “Easter bunny” by its discoverer Mike Brown.

Eris was once considered for the position of the tenth planet

Eris is the most massive dwarf planet in the Solar System, exceeding Pluto’s mass by 28%. As such, it was a serious contender to become the tenth planet but failed to meet the criteria set out by the IAU.

The planet’s composition makes up two-thirds rock and one-third ice, mostly a mixture of methane and carbon dioxide. One day on Pluto is 153.6 hours, approximately 6.4 Earth days, making it one of the slowest rotating dwarf planets.

Exploratory Missions and New Planets on the Horizon

With newer technology rapidly available to the scientific community and new exploratory missions getting more data and information about trans-Neptunian objects, our understanding of dwarf planets will increase.

So what’s holding back Hygiea’s confirmation as a dwarf planet? The criterion for being massive enough to form a spherical shape is in contention;

; it remains unclear if its roundness results from collision/impact disruption or its mass/gravity.

Along with Hygiea, other exciting dwarf planets could be soon discovered. Here is a quick rundown of some serious contenders:

Discovered in 2004, it is a trans-Neptunian object in the Kuiper belt, approximately 850 kilometres in diameter. As of 2018, it is located about 44.8 astronomical units from the Sun. Salacia’s status is in contention because its planetary density is arguable. It is uncertain if it can exist in hydrostatic equilibrium.

With an estimated diameter of 934±47 kilometres, 2002 MS4 is comparable in size to Ceres. Researchers need more data to determine whether 2002 MS4 is a dwarf planet or not.

Discovered at the Palomar Observatory in 2002, it has a rotation period of 8.8 hours, a moderately red color (similar to Quaoar) and no apparent planetary geology. Its low albedo has made it difficult to determine whether or not it is a dwarf planet.

Varda takes its name after the queen of the Valar, creator of the stars, one of the most powerful servants of almighty Eru Iluvatar in J. R. R. Tolkien’s fictional mythology. Varda’s status as a dwarf planet is uncertain because its size and albedo suggest it might not be a fully solid body.

This space object has a surface diameter of about 740 kilometres. It orbits the Sun once every 449 years. Researchers need more data on the planet’s mass and density to determine if it is a dwarf planet or not.

It is approximately 940 kilometres across its longest axis, as it has an elongated shape. This shape is presumably due to its rapid rotation rate of 6.71 hours, similar to that of other dwarf planets like Haumea. Like Varda, it remains unknown if this object has compressed into a fully solid body and thus remains contentious amongst astronomers regarding its planetary status.

*Note: The IAU officially recognizes five dwarf planets. We include four additional dwarf planets widely acknowledged by members of the scientific community, especially amongst leading planetary researchers like Gonzalo Tancredi, Michael Brown, and William Grundy. There are many more potential dwarf planets not listed here that remain under investigation.

The post A Visual Introduction to the Dwarf Planets in our Solar System appeared first on Visual Capitalist.

Designing for the Unexpected