A Map of the Online World in Incredible Detail
Advertisement

How to Submit your WordPress Site to Google News

What Is Google Cache? Everything Website Owners Need to Know


The internet is intangible, and because you can’t see it, it can be hard to comprehend its sheer vastness. As well, it’s difficult to gauge the relative size of different web properties. However, this map of the internet by Halcyon Maps offers a unique solution to these problems.

Inspired by the look and design of historical maps, this graphic provides a snapshot of the current state of the World Wide Web, as of April 2021. Let’s take a closer look!

Before diving into an analysis, it’s worth touching on the methodology behind this graphic’s design.

This map highlights thousands of the world’s most popular websites by visualizing them as “countries.” These “countries” are organized into clusters that are grouped by their content type (whether it’s a news website, search engine, e-commerce platform, etc). 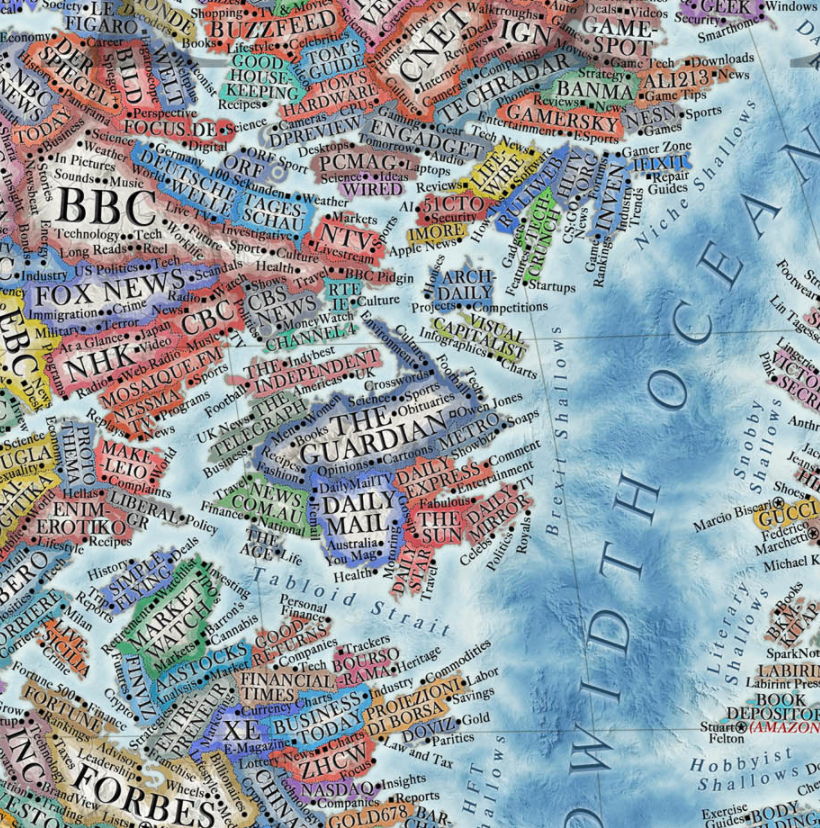 Editor’s fun fact: Can you spot Visual Capitalist? We’re right in between TechCrunch and The Guardian above.

The colored borders represent a website’s logo or user interface. In terms of scale, each website’s territory size is based on its average Alexa web traffic ranking. The data is a yearly average, measured from January 2020 to January 2021.

Along the borders of the map, you can find additional information, from ranked lists of social media consumption to a mini-map of average download speeds across the globe.

According to the designer Martin Vargic, this map took about a year to complete.

Google and YouTube take up a lot of space, which is unsurprising—they’re the two highest-ranked websites on the list:

Google has held the title as the internet’s most popular website since 2010. While Google’s popularity is well understood, the company’s dominance might be even more widespread than you’d think—across all Google-owned platforms (including YouTube) the company accounts for 90% of all internet searches.

The third highest ranked website is Tmall. For those who don’t know, Tmall is a Chinese e-commerce platform, owned by Alibaba Group. It focuses on Business-to-Consumer (B2C) transactions, and has established itself as the most popular e-commerce website in China—in Q1 2021, Tmall accounted for more than 50% of China’s B2C online transactions.

When it comes to the top 50 websites overall, a majority are either social networking platforms, search engines, or online marketplaces—while this may not come as a surprise, it’s still powerful to see visualized. For instance, even a huge, well-known website like the New York Times is just a tiny country on this map.

And of course, a map of the internet isn’t complete without mention of the dark web.

While it’s challenging to determine its true size, research indicates that the dark web accounts for a large portion of the internet’s true size. And apparently, it’s growing steadily, with the help of anonymous cryptocurrencies like Bitcoin.

For the most part, it’s believed that the dark web is used for unsavory reasons—however, it’s not all bad. Because of its anonymous nature, it can be used as a safe space for whistleblowing or activism.

Overall, this map, and the internet as a whole, has many places for us to explore. When you dive in, what “countries” catch your eye?

How to Configure Your WordPress Discussion Settings